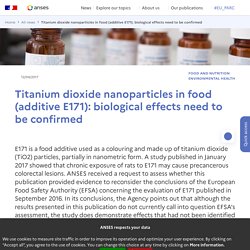 The Candy Chemical (E171) Ban Must Prevail To Protect Consumers. One reason that sees E171 in the cross-hairs of the French regulators is its size: it is usually so small that it can likely cross internal barriers within the human body. 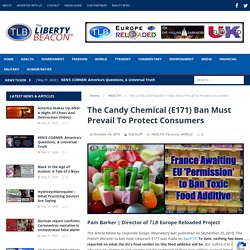 There are many unanswered questions around the health impact of such nanoparticles, to the point that no exposure limit could be calculated for this additive by the European Food Safety Agency (EFSA), whose panel of experts at the time included 57 per cent of members in a conflict of interest situation. It is therefore more than reasonable to err on the side of caution. In the case of E171, the French Government opted for a precautionary ban as its health and safety agency recommends moving away from products containing nano materials, and because it does not see sufficient evidence that titanium dioxide is a safe food additive.

But ever since the French Government announced the E171 ban, industry lobbies have been up in arms. You can take action to support the French ban on E171 here. Titanium Dioxide as Food Additive. 1. Introduction Titanium dioxide (TiO2) is a transition metal oxide with two main applications as either pigment or photocatalyst, in many sectors including buildings (self-cleaning windows, cements, paints and anti-fouling paints), paper industry, cosmetics (sunscreens and tooth paste), pharmaceutics (tablets), food (colouring agent) and others (air-purification system, rubbers, inks and ceramics). Pigmentary applications are by far the most important application of TiO2. The interest in TiO2 lies in the scattering of visible light controlled by its high refractive index and its granulometry (size and shape). 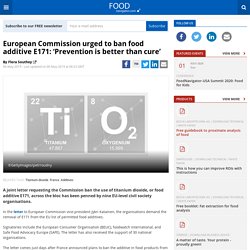 Signatories include the European Consumer Organisation (BEUC), foodwatch international, and Safe Food Advocacy Europe (SAFE). The letter has also received the support of 30 national organisations. The letter comes just days after France announced plans to ban the additive in food products from January 2020. According to France’s health and safety agency (ANSES), a lack of evidence guaranteeing the safety of titanium dioxide informed the decision.

E171 is a colouring with no nutritional value. However, the UN’s International Agency for Research on Cancer (IARC) has classified titanium dioxide as a possible human carcinogen. The EU Standing Committee on Plants, Animals, Food and Feed is due to examine France’s request on May 13. “…We urge you to not raise any objections or initiate any legal proceedings against the French measure.​ Titanium dioxide in food – TDMA. Titanium dioxide is widely used in the food industry as the colourant E171. 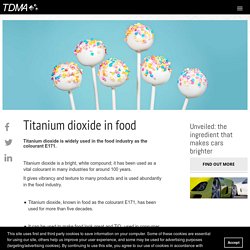 Titanium dioxide is a bright, white compound; it has been used as a vital colourant in many industries for around 100 years. It gives vibrancy and texture to many products and is used abundantly in the food industry. Titanium dioxide, known in food as the colourant E171, has been used for more than five decades.It can be used to make food look great and TiO2 used in consumer packaging can help protect food from degradation.It is poorly soluble and not readily absorbed by the body; its use in food has not been shown to have negative health impacts. Introduction. European civil society groups raise questions about industry-funded study on E171 toxicity and call on decision-makers to support the French ban on unnecessary food additive. A crucial European meeting to discuss the French ban of E171 – the food additive version of titanium dioxide – is due to take place on Monday 16th September. 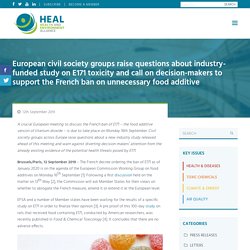 Civil society groups across Europe raise questions about a new industry study released ahead of this meeting and warn against diverting decision-makers’ attention from the already existing evidence of the potential health threats posed by E171. Brussels/Paris, 12 September 2019 – The French decree ordering the ban of E171 as of January 2020 is on the agenda of the European Commission Working Group on food additives on Monday 16th September [1]. Following a first discussion held on the matter on 13th May [2], the Commission will ask Member States for their views on whether to abrogate the French measure, amend it or extend it at the European level. The Mechanism-Based Toxicity Screening of Particles With Use in the Food and Nutrition Sector via the ToxTracker Reporter System - PubMed.

The rapid expansion of the incorporation of nano-sized materials in consumer products overlaps with the necessity for high-throughput reliable screening tools for the identification of the potential hazardous properties of the nanomaterials. 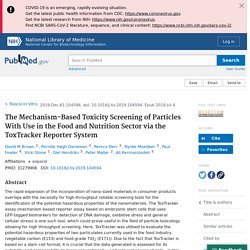 Toxicological Impact of Acute Exposure to E171 Food Additive and TiO 2 Nanoparticles on a Co-Culture of Caco-2 and HT29-MTX Intestinal Cells - PubMed. TiO2 particles are widely used in products for everyday consumption, such as cosmetics and food; their possible adverse effects on human health must therefore be investigated. 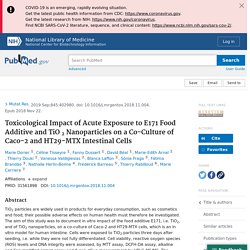 The aim of this study was to document in vitro impact of the food additive E171, i.e. TiO2, and of TiO2 nanoparticles, on a co-culture of Caco-2 and HT29-MTX cells, which is an in vitro model for human intestine. Cells were exposed to TiO2 particles three days after seeding, i.e. while they were not fully differentiated. Stop putting harmful additives in our food - Support the removal of white colourant E171. Future EU Commissioner for Health Stella Kyriakides, DG SANTE of the European Commission, the European food Safety Authority and National representatives at the Standing Committee on Plants, Animals, Food and Feed (section Novel Food and Toxicological Safety of the Food Chain). 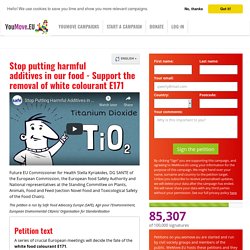 This petition is run by Safe Food Advocacy Europe (SAFE), Agir pour l'Environnement, European Environmental Citizens’ Organisation for Standardisation A series of crucial European meetings will decide the fate of the white food colourant E171. However, civil society groups across Europe raise questions about a new industry study released recently which could turn the tables in favour of industry lobby groups on this major issue.

We urge the European Commission and the national experts to uphold the French ban on E171, based on the strong expertise already brought together by the French food safety agency (ANSES) and the important number of independent studies already published. Co-exposure to the food additives SiO2 (E551) or TiO2 (E171) and the pesticide boscalid increases cytotoxicity and bioavailability of the pesticide in a tri-culture small intestinal epithelium model: potential health implications - Environmental Science: X. 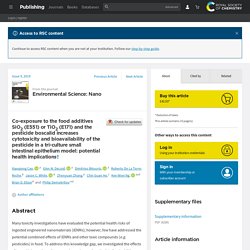 Cao, G. M. DeLoid, D. Bitounis, R. De La Torre-Roche, J. If you are not the author of this article and you wish to reproduce material from it in a third party non-RSC publication you must formally request permission using Copyright Clearance Center. Authors contributing to RSC publications (journal articles, books or book chapters) do not need to formally request permission to reproduce material contained in this article provided that the correct acknowledgement is given with the reproduced material.

New Publication from The University of Sydney & University of New South Wales. POLITICO Pro Sustainability Snapshot, presented by the European Committee of the Regions. Food additive E171: first findings of oral exposure to titanium dioxide nanoparticles. Present in many products including cosmetics, sunscreens, paint and building materials, titanium dioxide (or TiO2), known as E171 in Europe, is also widely used as an additive in the food industry to whiten or give opacity to products. 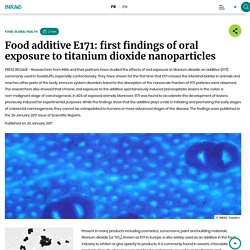 It is commonly found in sweets, chocolate products, biscuits, chewing gum and food supplements, as well as in toothpaste and pharmaceutical products. Composed of micro- and nanoparticles, E171 is nevertheless not labelled a “nanomaterial”, since it does not contain more than 50% of nanoparticles (in general it contains from 10-40%). The International Agency for Research on Cancer (IARC) evaluated the risk of exposure to titanium dioxide by inhalation (occupational exposure), resulting in a Group 2B classification, reserved for potential carcinogens for humans.

Today, oral exposure to E171 is a concern, especially in children who tend to eat a lot of sweets. Titanium dioxide crosses the intestinal barrier and passes into the bloodstream. Common Food Additive Linked to Microbiota and Gut Inflammation. New research provides evidence that nanoparticles, which are present in many food items, may have a substantial and harmful influence on human health. ERCA2019SA0036. RisQIngestionNpTiO2. Exposition orale aux nanoparticules de dioxyde, effets. Dioxyde de titane. L'article a été ajouté à votre bibliothèque Mis à jour le 15/04/2019. Two New Solutions to Replace Titanium Dioxide - Sensient Food Colors : Sensient Food Colors. Uncertainty about the Acceptability of Titanium Dioxide Since Dunkin’ Brands removed titanium dioxide from their powdered donuts after being pressured by the activist group ‘As You Sow’, we have noticed a significant increase in the number of requests for titanium-free alternatives across many applications.

Historically, the sugar and gum confectionary market has been the leading user of titanium dioxide, but even this market has begun to shy away from the ingredient. In the past few years, there has been a decline in the percentage of new launches containing TiO2, according to data from Mintel. In Europe, we have witnessed increased regulatory scrutiny of titanium dioxide. For example, the French Agency for Food, Environmental and Occupational Health and Safety (ANSES) submitted a proposal to European Chemicals Agency (ECHA) requesting the classification of TiO2 be changed to a 1A or B carcinogen. Replacing Titanium Dioxide in Mid to High Water Activity Applications - Sensient Food Colors : Sensient Food Colors. November 2017 Demand for Titanium Dioxide Alternatives Spurs Innovation Last year, we launched two new solutions under our Avalanche™ brand addressing the need for more label-friendly, white alternatives to titanium dioxide (TiO2) in low and mid water activity applications, including panned confections, coating systems, frosted cereals, and more.