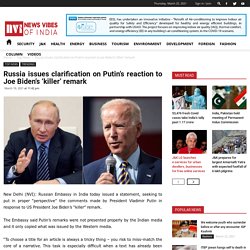 The Embassy said Putin’s remarks were not presented properly by the Indian media and it only copied what was issued by the Western media. “To choose a title for an article is always a tricky thing – you risk to miss-match the core of a narrative. This task is especially difficult when a text has already been written by your Western media partners, and you have nothing left to do but to copy/paste it, no matter what the essence of the material is. DUSTLIK-II: Indo-Uzbekistan Field Training exercise concludes in Uttarakhand. New Delhi (NVI): The second edition of Indo-Uzbekistan Joint Field Training Exercise, EXERCISE DUSTLIK-II, has culminated today, after 10 days of mutual learning, in Ranikhet, Uttarakhand. 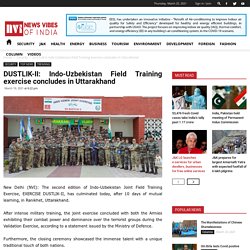 After intense military training, the joint exercise concluded with both the Armies exhibiting their combat power and dominance over the terrorist groups during the Validation Exercise, according to a statement issued by the Ministry of Defence. Furthermore, the closing ceremony showcased the immense talent with a unique traditional touch of both nations. “The senior officials expressed their satisfaction and gratitude towards the professional conduct of the exercise,” it added. During the joint exercise, which began on March 10, training was focused on Counter Insurgency / Counter-Terrorism operations in the urban scenarios as well as sharing of expertise on skills at Arms, the statement read. 3 billion people globally face health risk due to data shortage on water quality: UNEP.

New Delhi (NVI): More than 3 billion people worldwide are at risk of diseases due to a lack of data available on the water quality of rivers, lakes and groundwater in their areas, according to the recent UNEP report. 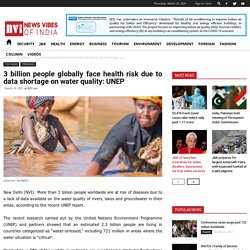 The recent research carried out by the United Nations Environment Programme (UNEP) and partners showed that an estimated 2.3 billion people are living in countries categorized as “water-stressed,” including 721 million in areas where the water situation is “critical”. Meanwhile, a fifth of the world’s river basins are experiencing dramatic fluctuations in water availability, it added. “Our planet is facing a triple crisis of climate change, biodiversity loss and pollution and waste. These crises are taking a heavy toll on oceans, rivers, seas and lakes,” said UNEP Executive Director Inger Andersen. “Collecting regular, comprehensive and up-to-date data is vital to managing our water resources more sustainably and ensuring access to safe water for all,” Andersen added.

India, Pakistan agree to follow all ceasefire agreements. New Delhi (NVI): In a crucial development, India and Pakistan armies have agreed for strict observance of all agreements, understandings and cease firing along the Line of Control (LoC) and all other sectors with effect from February 24 midnight. 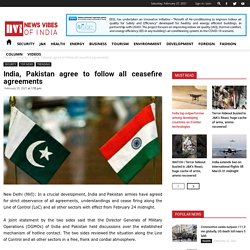 A joint statement by the two sides said that the Director Generals of Military Operations (DGMOs) of India and Pakistan held discussions over the established mechanism of hotline contact. The two sides reviewed the situation along the Line of Control and all other sectors in a free, frank and cordial atmosphere. In the interest of achieving mutually beneficial and sustainable peace along the borders, the two DGMOs agreed to address each other’s core issues and concerns which have propensity to disturb peace and lead to violence, it said.

“Both sides agreed for strict observance of all agreements, understandings and cease firing along the Line of Control and all other sectors with effect from midnight 24/25 Feb 2021,” read the official statement. India hasn't conceded any territory under disengagement pact with China: MEA. New Delhi (NVI): India today said that it has not conceded any territory along the Line of Actual Control as a result of the disengagement pact with China and has rather enforced observance and respect for LAC. 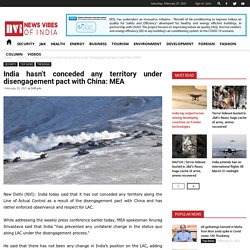 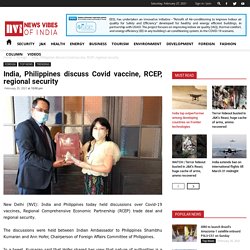 The discussions were held between Indian Ambassador to Philippines Shambhu Kumaran and Ann Hofer, Chairperson of Foreign Affairs Committee of Philippines. In a tweet, Kumaran said that Hofer shared her view that nature of authorities is a strong determinant of their foreign policy. “Excellent meeting with Hon. Pakistan remains on FATF's 'grey list', gets June deadline to complete action plan. New Delhi (NVI): In a big jolt to the Imran Khan government, Pakistan was retained in the FATF ‘grey list’ as it has still not fulfilled all conditions to stop terror funding and money laundering. 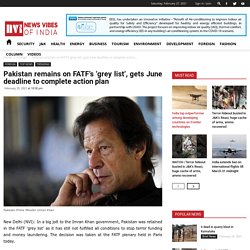 The decision was taken at the FATF plenary held in Paris today. Pakistan has failed to fulfil three of the 27-point action plan. Its performance will be reviewed once again during the June plenary of FATF. Till then, it will remain on the grey list. In its plenary session held today, the global watchdog on terrorism called on Pakistan to implement targeted financial sanctions against all 1267 and 1373 designated terrorists. India desires normal neighbourly relations with Pakistan: MEA. New Delhi (NVI): The Ministry of External Affairs today said that India desires a normal neighbourly relations with Pakistan and is committed to addressing issues, if any, in a peaceful bilateral manner. 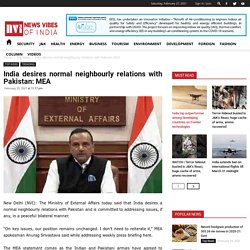 “On key issues, our position remains unchanged. I don’t need to reiterate it,” MEA spokesman Anurag Srivastava said while addressing weekly press briefing here. The MEA statement comes as the Indian and Pakistani armies have agreed to strictly observe all the ceasefire agreements. Student activist held by Pak forces for raising slogans against security agencies. 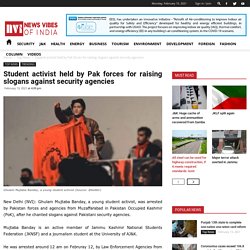 Mujtaba Banday is an active member of Jammu Kashmir National Students Federation (JKNSF) and a journalism student at the University of AJ&K. He was arrested around 12 am on Februray 12, by Law Enforcement Agencies from a famous lawyer, Aslam Raza’s residence in Muzaffarabad, according to the reports. Many people took to social media platforms and demanded his immediate release, calling the arrest illegal. Prof Sajjad Raja, Chairman of National Equality Party, took to Twitter and wrote, “After Tanveer Ahmed, now JKNSF worker Ghulam Mujtaba Banday has been arrested in Muzaffarabad. The charges framed are that he chanted slogans against Pakistani security agencies & has used inappropriate language. Baloch missing persons' families set up protest camp in Pak's Islamabad. New Delhi (NVI): Since three days, families of Baloch missing persons have taken their protest camp to Pakistan’s capital Islamabad in order to attract attention towards their plight. 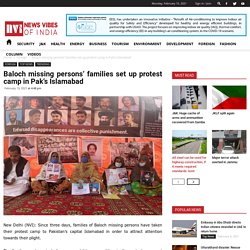 The family members, including young children, are sitting in the protest camp set up in front of Islamabad press club. They demand recovery of their loved ones, some of whom have gone missing for almost a decade. The victim families have alleged that the government’s commission formed to trace enforced disappearances is only wasting everyone’s time, according to the Balochistan Post. Pakistan Government settling Kashmiri militants in Sindh, locals angry. Washington (NVI): Local people in Sindh are outraged as the Pakistan government is effecting a major demographic change in their land by settling Kashmiris who crossed over to Pakistan from India from 1989 onwards for training in militancy.

Sindhi leaders say it is part of a conspiracy by the Pakistani establishment to convert Sindhis into a minority and suppress their legitimate struggle for freedom from Pakistan. “Jeay Sindh Freedom Movement (JSFM) rejects all programmes and plans of settlement of outsiders in Sindh,” said its Founder and Chief Organiser Zafar Sahito, while slamming the Pakistani establishment. He was commenting on the Pakistan government’s recent letter to Sindh government seeking details of agricultural and residential land owned by Sindh government which could be used for settling “Kashmiri refugees of 1989 onwards”. These Kashmiris are those who crossed over to Pakistan for training in militancy but could not or did not return home, fearing the Indian law.

Indian astronomers detect optical flare in one of the oldest space objects. New Delhi (NVI): Indian Astronomers have reported one of the strongest flares from a feeding supermassive black hole or blazar called BL Lacertae. Blazars or feeding super massive black holes in the heart of distant galaxies receive a lot of attention from the astronomical community because of their complicated emission mechanism.

They emit jets of charged particles travelling nearly at the speed of light and are one of the most luminous and energetic objects in the Universe. Analysis of the flare from this blazar, one of the oldest astronomical objects, can help trace the mass of the black hole and the source of this emission. Such analysis can provide a lead to probe into mysteries and trace events at different stages of evolution of the Universe, according to statement issued by Ministry of Science & Technology.

'Extremely unlikely' that Covid began in Wuhan lab: WHO team. New Delhi (NVI) It is “extremely unlikely” that the coronavirus pandemic began from a laboratory in Wuhan, according to the World Health Organisation (WHO) team that visited the Chinese city to investigate the origins of coronavirus pandemic. The investigators have ruled out the theory regarding origin of Covid-19 from a lab in the Chinese city of Wuhan that has so far been regarded as the epicentre of the pandemic that has claimed millions of lives so far.

LIVE from Wuhan : Media briefing on #COVID19 origin mission World Health Organization (WHO) (@WHO) February 9, 2021 “On the basis of serious discussion and very diligent research, we have reached the extremely unlikely conclusion. India, Afghanistan sign pact to build Shahtoot dam in Kabul                New Delhi (NVI): India and Afghanistan today signed a Memorandum of Understanding (MoU) for the construction of the Lalandar (Shatoot) Dam in Kabul, in another step towards bolstering the friendly ties between the two countries. The dam would help provide drinking water to residents of Kabul city. The MoU was signed by External Affairs Minister S Jaishankar and Afghan Foreign Minister Hanif Atmar, in the presence of Prime Minister Narendra Modi and President of Afghanistan Mohammad Ashraf Ghani, the Ministry of External Affairs said in a statement.

Signing MoU on Shahtoot Dam with President @ashrafghani. Narendra Modi (@narendramodi) February 9, 2021 While speaking on the occasion, PM Modi highlighted the civilizational relationship between India and Afghanistan and gave an assurance of India’s continued support for a peaceful, united, stable, prosperous and inclusive Afghanistan. Embassy in Abu Dhabi directs Indian citizens stranded in UAE to return home. New Delhi (NVI): The Indian Embassy in Abu Dhabi has advised Indian citizens not to travel via the UAE to Saudi Arabia and Kuwait and consider returning to India, amid COVID-19 travel restrictions.

Biden, Modi decide to push Quad for ‘stronger regional architecture’ in Indo-Pacific. New Delhi/Washington (NVI): Amidst China’s growing assertiveness, US President Joseph Biden and Prime Minister Narendra Modi have decided to have close cooperation to promote a “stronger regional architecture” in the Indo-Pacific through the Quad grouping of India, US, Japan and Australia. In their first telephonic conversation since Biden assumed charge as the US President on January 20, the two leaders committed to work closely in the fight against COVID-19 and rebuild the global economy and stand together against the scourge of global terrorism. The two leaders also noted that the India-US partnership is “firmly anchored in a shared commitment to democratic values and common strategic interests.”

BLA says it attacked Pakistan army’s Kashmir rally in Quetta, warns of more attacks. India to supply 1 lakh doses of Covid-19 vaccine to Cambodia. ‘Kashmir Solidarity Day’ is Pakistan’s hypocrisy, says Sindhi Freedom Fighter. WHO team visits high-security Wuhan virus lab in China. New Zealand grants provisional approval to Pfizer/BioNTech vaccine. New Delhi (NVI): The Pfizer/BioNTech vaccine has been provisionally approved for use in New Zealand, where the government will begin vaccinating frontline healthcare and border workers in the coming months. Coronavirus cases surpass 95.5 mn worldwide, US tally tops 24 mn. New Delhi (NVI): More than 95.5 million people around the world have been confirmed to have the coronavirus, while the death toll has crossed 2,039,000 according to the Johns Hopkins University tally.