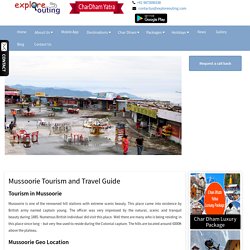 This place came into existence by British army named captain young. The officer was very impressed by the natural, scenic and tranquil beauty during 1885. Numerous British individual did visit this place. Well there are many who is being residing in this place since long – but very few used to reside during the Colonial capture. Mussoorie Geo Location This place is situated only 35km away from the main city- Dehradun.

With our passion towards exploring new and unexplored places, we required something which is comfortable, more luggage space, high ground clearance and with 4×4 option, because our inclination towards un-explored places. 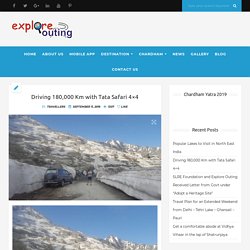 Choosing Safari was easy as there were not many options in 4×4 (family car) range :-). It took few Km of drive to get used to a big size real SUV. Safari has brought-out traveller & driver inside me. I realised how much I enjoy driving, and you don’t get tired doing the things you enjoy. What I learnt, experienced and enjoyed – (a) It is not only the destination, but journey that is equally important. (b) To drive long distances, it is very necessary to drive comfortably. (c) There are many beautiful & un-explored places in India where – even on long weekends- you will not find many people. NEWSPAPER MAGAZINE NEWS PORTAL. SLRE Foundation and Explore Outing Received Letter from Govt under “Adopt a Heritage Site” – Exploreouting. 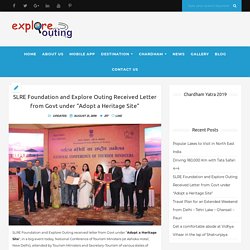 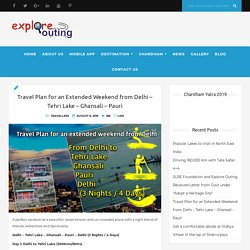 Stay at Tehri Lake Resort (GMVN ) facing the Tehri Lake. Enjoy the picturesque & relaxing location at lake shore. Driving Tips to Enjoy Your Journey. Where to Go in India - Top Travel Destinations. Legend has it that the Sisodias of Mewar are descended from the Sun God through Luv, the son of Lord Rama whose life story is told in India’s great epic, the Ramayana. 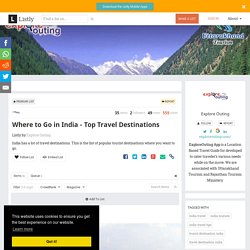 The chronicles of the bards tell us that in the 6th century, Vallabhi was sacked by strangers from the west. Pushpavati, the queen of Vallabhi, who was on a pilgrimage offering prayers for her unborn child, heard of the destruction of Vallabhi and the death of her husband while travelling through the Aravalli hills in the north. Despairing, she took refuge in a cave, and there gave birth to a son whom she called Guhil or ‘cave born’. Then, entrusting her child to a maid servant, the queen ordered a funeral pyre to be lit, and walked into it to join her dead husband’s soul. Guhil or Guhaditya, was befriended by the Bhils, the Adivasis, who had lived in the Aravalli hills since well before 2,000 BC.

Char Dham Yatra and Nearby Attractions in Uttarakhand, India. One of the four sites in Chota Char Dham, Gangotri, the origin of the River Ganges and seat of the goddess Ganga, is a town and a Nagar Panchayat (municipality) in Uttarkashi district in the state of Uttarakhand. 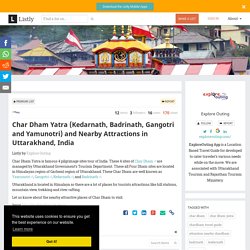 Elevated at 3753 metres (12,313 ft) on the Greater Himalayan Range and situated on the Banks of the river Bhagirathi, it is 105 km from Uttarkashi. Devotees from all parts of India seeking redemption, and forgiveness of sins make this pilgrimage at least once in his lifetime. It obtains the name Ganga from Devprayag onwards, where it meets the Alaknanda River. Nearby it is Gaumukh Glacier situated at a height of 4200 metres above sea level. Explore Outing (exploreouting) on Pinterest. ExploreOuting ExploreOuting – India Travel Guide and App. Scoop.it - Content Curation Tool. Uttarakhand: First e-office in Uttarakhand tourism department. DEHRADUN: Uttarakhand Tourism Development Board (UTDB) has become the first e-office in the tourism department of state where all the office work would be conducted through the software devised by National Informatics Centre. . 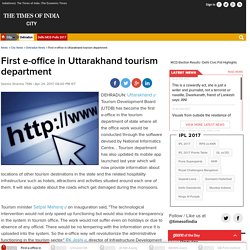 Tourism department has also updated its mobile app launched last year which will now provide information about locations of other tourism destinations in the state and the related hospitality infrastructure such as hotels, attractions and activities situated around each one of them. It will also update about the roads which get damaged during the monsoons. Tourism minister Satpal Maharaj on inauguration said, "The technological intervention would not only speed up functioning but would also induce transparency in the system in tourism office. The work would not suffer even on holidays or due to absence of any official. There would be no tempering with the information once it is uploaded into the system. Char Dham Weather Update, Char Dham Live Weather Update. Moodle. Moodle. (1888PressRelease) August 12, 2017 - Ghaziabad, India - Gabbit Trans Systems Private Limited is working on its vision to enable the travel ecosystem so as the traveler can travel in their comfort zone of their budget, interest, time availability, choice and also in a safely manner. 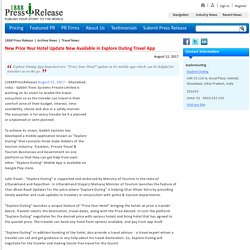 The ecosystem is for every traveler be it a planned or unplanned or semi planned.To achieve its vision, Gabbit Systems has developed a mobile application known as "Explore Outing" that connects three stake Holders of the tourism Industry: Travelers, Private Travel & Tourism Businesses and Government on one platform so that they can get help from each other. "Explore Outing" Mobile App is available on Google Play store. Get a comfortable abode at Vidhya Vihaar in the lap of Shatrunjaya – Exploreouting. Vidhya Vihaar, a Jain temple in Palitana, a place filled with true devotions in the foothills of Shatrunjaya hills, is a pilgrim for the Jain devotees looking for an experience of pure holiness. 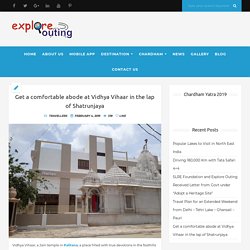 Now you can experience this devotional and holy atmosphere by residing in the Vidhya Vihaar temple’s Dharmashala. This dharmashala can be a perfect abode if you are looking for a comfortable stay in the solace of God. You can choose from a number of different rooms at the dharmashala by Vidhya Vihaar with facilities that can provide you with luxury and happiness. Whether you are looking for an AC room or playground for kids, Vidhya Vihaar offers you everything. Let’s have a brief look at the types of rooms available at the dharmashala. Double Bed room This is a spacious room with two beds which can provide a comfortable stay for two people and is equipped with all the basic facilities. 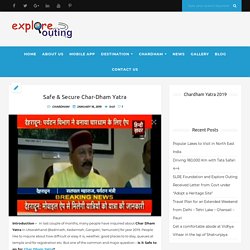 People like to inquire about how difficult or easy it is, weather, good places to to stay, queues at temple and for registration etc. But one of the common and major question – Is it Safe to go for Char Dham Yatra? And below are few major reasons in people mind behind this question – Memories of flash flood at Kedarnath in 2013News & Media Reports about frequent disruption of YatraHilly area, very tough & risky driving – narrow roads with deep trench on one sideLong trekking, Un-predictable WeatherHigh altitude, cold weather – not good for people who are not accustomed to cold weatherMandatory registration for Yatra – Although it is for good purpose, but created a doubt in mind of few peopleAnd couple of generic issues like getting help in vehicle breakdown, availability of good food etc 1. 2. 3.

An App that travels with you. How to get Kumbh Mela packages in Allahabad for 2019. Mathura Tourism, Religious Places in Mathura, Mathura Tour and Travel Guide. Mathura - The Tale of Lord Krishna As indicated by Hindu sacred writings Mathura is the origin of Lord Krishna at the local point of Braj or Brij-bhoomi, called Shri Krishna Janma-Bhoomi, actually: 'Master Krishna's origination'. The Keshav Dev Temple was worked on old occasions on the site of Krishna's incredible origination (an underground jail). As indicated by the Mahabharata and Bhagavata Purana legends, Mathura was the capital of the Surasena Kingdom, controlled by Kansa the maternal uncle of Shri Krishna.

Chardham Yatra Experience - Explore Outing - An app Travel with You. Introduction – Being an avid traveller had covered Multiple Continents across the globe, can assure that travel in India has its own uniqueness. The most tourist destinations in India have cultural or religious places to visit they may be temples, churches, Gurudwaras, Mosque, Monastery etc. You find any place any tourist destination with “things to do”, more than 90% chances you will find religious places. Uttarakhand - Dev Bhoomi - Explore Outing - An app Travel with You. Uttarakhand, a state as a complete Destination for a tourist, it has all the variety of tourism, may you need Fun, Adventure, Wildlife, Bird Watching, Trekking, Mediation, Peace, or Leisure.

Uttarakhand is one of the most beautiful states of North India covering the slopes of southern Himalayan range. The state is guarded by Nepal in east, Himachal Pradesh in West, Tibet in North & Uttar Pradesh in South. The state has more than 60% dense forests having the home for tigers, leopards and many other endangered animal, plant species, rare Himalayan birds that can be spotted in the region of Pangoot & Binsar. The origin of the two holy rivers Ganga & Yamuna lies here. India’s best trekking paths like Valley of Flowers, Roopkund, and Chopta-Chandrashila are there for the adventure lovers. 1. Welcome To Rajshthan - Explore Outing - An app Travel with You. The vibrant state of Rajasthan is the ride on the sands of time. The glory of the “Land of Maharajas” is retained by its majestic palaces, forts and monuments. The perfect amalgamation of vibrant culture and rich heritage, tradition and contemporary blends draw innumerable tourists from across the globe every year.

The major attractions include the ruins of Indus Valley Civilization, the oldest mountain range of Aravali, Jain pilgrimage site known as the Dilwara Temples, Karni Mata Temple, Mount Abu – the only hill station in the Indian state of Rajasthan and Sariska Tiger Reserve. Don’t leave Rajasthan prior exploring the ancient citadel of the Kachhawa clan, Amber (pronounced Amer) fort.