How tsunamis work - Alex Gendler. If you live near the coast, it couldn't hurt to know what to do in case of a tsunami.

Do not wait for an official warning. Instead, let the strong shaking in the earth be your warning. After protecting yourself from falling objects, quickly move away from the water and to higher ground. What causes a tsunami? Earthquake tsunamis begin when subduction occurs, a process where larger undersea plates slide under a lighter plate. 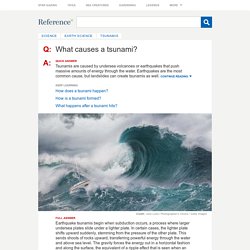 What causes Tsunamis? Tsunami. EQC Earthquake Commission. A tsunami is a series of powerful ocean surges that is caused by a large volume of the ocean being displaced – often by an undersea earthquake. 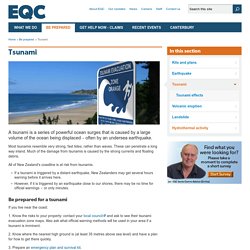 Most tsunamis resemble very strong, fast tides, rather than waves. These can penetrate a long way inland. Much of the damage from tsunamis is caused by the strong currents and floating debris. All of New Zealand's coastline is at risk from tsunamis. If a tsunami is triggered by a distant earthquake, New Zealanders may get several hours warning before it arrives here.However, if it is triggered by an earthquake close to our shores, there may be no time for official warnings – or only minutes.

Tsunami Safety Tips, Tsunami Preparation, Tsunami Readiness. Occurrence and history of the most destructive seaquakes. Tsunamis are disasters that threaten coasts and beaches all over the world. 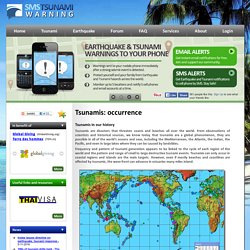 From observations of scientists and historical sources, we know today that tsunamis are a global phenomenon, they are possible in all of the world’s oceans and seas, including the Mediterranean, the Atlantic, the Indian, the Pacific, and even in large lakes where they can be caused by landslides. Tsunami / Natural Hazards / Our Science / Home - GNS Science. GNS Science works with a number of groups, including NIWA, universities, and private individuals, to improve the knowledge of tsunami hazards in New Zealand. 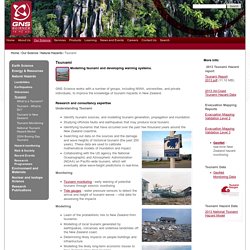 Understanding Tsunami Identify tsunami sources, and modelling tsunami generation, propagation and inundation Studying offshore faults and earthquakes that may produce local tsunami. Identifying tsunamis that have occurred over the past few thousand years around the New Zealand coastline. Searching out data on the sources and the damage and wave heights of historical tsunami (the past 200 years). These data are used to calibrate mathematical models of inundation and impact. Collaborating with the US agency the National Oceanographic and Atmospheric Administration (NOAA) on Pacific-wide tsunami, which will eventually allow wave-height predictions in real-time.

Tsunami in New Zealand / Tsunami / Natural Hazards / Our Science / Home - GNS Science. Has New Zealand been hit by tsunamis? New Zealand has experienced about 10 tsunamis higher than 5m since 1840. Some were caused by distant earthquakes, but most by seafloor quakes not far off the coast. A nearby coastal seafloor earthquake is the only warning people may get before a tsunami arrives. Such a tsunami can arrive within minutes - before there is time to issue a warning.

Distant earthquakes give more warning time. How vulnerable is New Zealand to tsunamis? Quite vulnerable. Tsunami wreaks havoc on Southeast Asia - Dec 26, 2004. On the day after Christmas in 2004, a massive undersea earthquake occurs just off the coast of Indonesia at a few minutes before 8 a.m. local time. 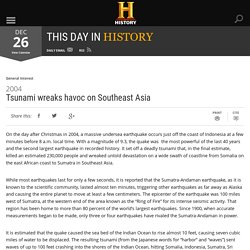 With a magnitude of 9.3, the quake was the most powerful of the last 40 years and the second largest earthquake in recorded history. It set off a deadly tsunami that, in the final estimate, killed an estimated 230,000 people and wreaked untold devastation on a wide swath of coastline from Somalia on the east African coast to Sumatra in Southeast Asia. While most earthquakes last for only a few seconds, it is reported that the Sumatra-Andaman earthquake, as it is known to the scientific community, lasted almost ten minutes, triggering other earthquakes as far away as Alaska and causing the entire planet to move at least a few centimeters. The Deadliest Tsunami in History? Updated January 7, 2005 Tsunamis: Facts About Killer Waves The earthquake that generated the great Indian Ocean tsunami of 2004 is estimated to have released the energy of 23,000 Hiroshima-type atomic bombs, according to the U.S. 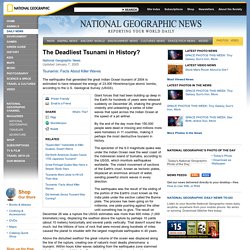 Geological Survey (USGS). Giant forces that had been building up deep in the Earth for hundreds of years were released suddenly on December 26, shaking the ground violently and unleashing a series of killer waves that sped across the Indian Ocean at the speed of a jet airliner. Review of Tsunami Hazard in New Zealand » Ministry of Civil Defence and Emergency Management. 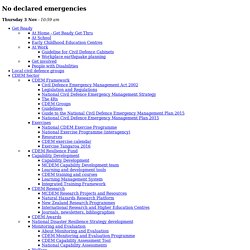 Parts of our coast are exposed to greater tsunami hazard than previously thought, while the hazard in other coastal regions is the same or less. The findings come from a new GNS Science report commissioned by the Ministry for Civil Defence and Emergency Management. It updates a report on New Zealand’s tsunami hazards that we compiled in 2005. This year’s report incorporates new research and significant changes in scientific understanding since our 2005 report.

Our recent research and modelling has shown the hazard from near-source tsunami with little travel time is higher than previously estimated. – Tsunamis. Tsunamis have been a danger in New Zealand as long as people have lived there. 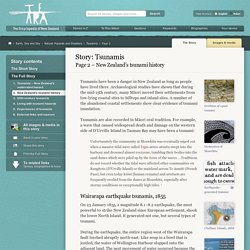 Archaeological studies have shown that during the mid-15th century, many Māori moved their settlements from low-lying coastal sites to hilltops and inland sites. A number of the abandoned coastal settlements show clear evidence of tsunami inundation. Tsunamis are also recorded in Māori oral tradition. For example, a wave that caused widespread death and damage on the western side of D’Urville Island in Tasman Bay may have been a tsunami: Wairarapa earthquake tsunamis, 1855 On 23 January 1855, a magnitude 8.1–8.2 earthquake, the most powerful to strike New Zealand since European settlement, shook the lower North Island.