13 Parts of a Volcano: The Anatomy of Volcanoes - Earth How. Do you want to learn the anatomy of a volcano? 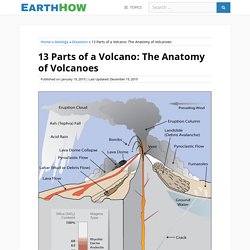 From tephra to volcanic bombs: It’s time to explore the 13 parts of a volcano. Let’s dive right in. 1 Magma When rocks become so hot, they can become a substance called magma. 2 Vent Magma is lighter than the solid rock around it, so it rises. 3 Lava Flow Magma that erupts is called lava. 4 Volcanic Bombs These molten rocks are thrown out from a volcano and are at least 66mm in size. 5 Lava Dome When lava is too thick and sticky, it piles up around the vent and forms a dome. 6 Eruption Column These clouds of heated ash and tephra are released from a vent during an explosive volcanic eruption. 7 Eruption Cloud Ash falls back down like powdery snow. 8 Tephra If magma is thick and sticky, gases cannot escape easily. 9 Acid Rain When sulfur dioxide and nitrogen oxide emitted from volcanoes reacts with water molecules in the air, it produces acid rain.

Oh WOW. Imagine if a #volcano stopped erupting magma, the magma inside solidified, and then the volcano was cut in half - THIS is what the interior structure of that volcano would look like. Very cool cross-section through a volcanic edifice! Why So Many People Choose to Live Near Active Volcanoes. Volcano Time-Lapse sur Twitter : 2018 ~ The Year of Volcanoes, the year in review of my adventures watching live webcams on youtube and recording the action. #volcanoes #volcano #popocatepetl #etna #merapi #eruption #lava #mexico. Rob Chambers sur Twitter : "Great very easy to listen to lecture on volcanoes from a Professor of Volcanology particularly good for Year 12/ 13 - listen from 18.19 minutes in onwards - really interesting #geographyteacher @OCR_Geog.

Volcanoes with eruptions since 1883 #geography #volcano #visualisation #infographic… Volcano eruption from ISS...□… Communicating volcanic risk: lava, eruptions and uncertainty. Volcanologists warn world is unprepared for next major eruption. The world needs to do more to prepare for the next huge volcanic eruption, a team of leading scientists says. 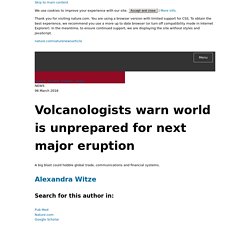 The devastating Indian Ocean tsunami of 2004 and the Tōhoku earthquake in Japan in 2011 highlighted some of the worst-case scenarios for natural disasters. But humanity has not had to deal with a cataclysmic volcanic disaster since at least 1815, when the eruption of Tambora in Indonesia killed tens of thousands of people and led to a ‘year without a summer’ in Europe and North America. Such world-altering blasts rank at 7 or more on the Volcanic Explosivity Index (VEI) scale of eruptions, which goes to 8. “The next VEI-7 eruption could occur within our lifetimes, or it could be hundreds of years down the road,” says Chris Newhall, a volcanologist with the Mirisbiris Garden and Nature Center in Santo Domingo, Philippines.

But the time to have this discussion is now, he says, so that researchers and government officials can plan and prepare before an emergency strikes. Dr Janine Krippner sur Twitter : "There may be some new terms during the #VolcanoCup, so here are some resources to get you started: USGS Volcano Glossary Smithsonian volcano history search. Volcano Hazards Program Glossary. See how this island changed over the course of nearly three years. *****The photographer who lowers herself into active volcanoes (women in STEM) *****How volcanoes change the climate (video clip) First Global Maps of Volcanic Emissions Use NASA Satellite Data. Elevated carbon dioxide concentrations in the atmosphere may increase water-use efficiency in crops and considerably mitigate yield losses due to climate change, according to a new NASA study. 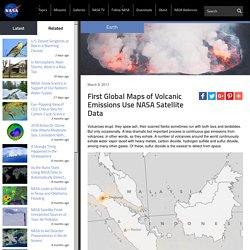 The results, published in the journal Nature Climate Change on April 18, show some compensation for the adverse impacts of temperature extremes and water scarcity caused by increasing emissions of carbon dioxide and other greenhouse gases. A wheat field in Eastern India near Murshidabad. Credits: Photo copyright Nupur Das Gupta Studies have shown that higher concentrations of atmospheric carbon dioxide affect crops in two important ways: they boost crop yields by increasing the rate of photosynthesis, which spurs growth, and they reduce the amount of water crops lose through transpiration. Plants transpire through their leaves, which contain tiny pores called stomata that open and collect carbon dioxide molecules for photosynthesis. But Rosenzweig said that more field experiments are needed. Volcanic eruptions could cost large cities up to $30 billion: Swiss Re - Business Insurance.

*****VolFilm’s Videos on Vimeo: Lahars; Pyroclastic flows. Top 10 World’s Most Dangerous Volcanoes - Quiet Corner. On the morning of August 27th 1883 the small Indonesian island of Krakatoa virtually destroyed itself in a series of cataclysmic explosions the likes of which have never been witnessed in human history before or since. 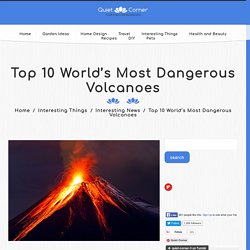 Not only was the explosion the loudest sound ever recorded, it released 4 times more energy than the most powerful nuclear weapon ever created, the Tsar Bomba. In fact the sound of Krakatoa going off was heard 4,830 km (3,000 miles) away and ruptured eardrums 64 km (40 miles) away. It is estimated that anywhere between 35,000 and 120,000 people died as a result of the Krakatoa eruption. Most of these were as a result of tsunamis caused by the volcano, however around a thousand died in Ketimbang in Sumatra as a direct result of the eruption. Today there are around 1,500 active volcanoes around the world, Anak Krakatau, “the Child of Krakatoa”. 10. Ulawun is the classic cone shaped volcano with its smoking peak rising up out of the jungle. 9. 8. 7. 6. 5. 4. 3. 2. 1. Volcanoes 101.