Painter Ray Mack shoplifts from the dudes of art history. I first encountered Ray Mack’s art when we attended grad school together. 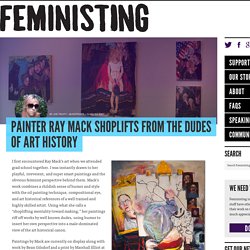 I was instantly drawn to her playful, irreverent, and super smart paintings and the obvious feminist perspective behind them. Mack’s work combines a childish sense of humor and style with the oil painting technique, compositional eye, and art historical references of a well trained and highly skilled artist. Using what she calls a “shoplifting mentality toward making,” her paintings riff off works by well known dudes, using humor to insert her own perspective into a male-dominated view of the art historical canon. Paintings by Mack are currently on display along with work by Bean Gilsdorf and a print by Marshall Elliot at Bass & Reiner Gallery in San Francisco. Many of Mack’s latest pieces play with pieces by painter, magazine cover artist, and ultimate representation of Americana Norman Rockwell. You can view Ray Mack’s oil paintings at Bass & Reiner through June 4, 2016 and on her website.

Feminism & Feminist Art - The Feminist Art History Archive. Feminist art history must be considered as part of this discussion. 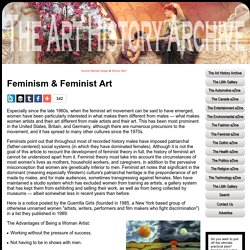 Its proponents have demanded that women's arts from all cultures, of all periods, be included in studies and exhibitions of art. In 1971 Linda Nochlin (American, contemporary art critic) wrote a landmark article, "Why Have There Been No GREAT Women Artists? " giving tremendous momentum to feminist scholarship concerning women in the arts. Numerous histories of women artists were published in the 1970s, and several others have appeared in the years since then. Before the late 1960s most women artists, struggling to participate in the male-dominated art world, had overwhelming disincentives to put feminist meanings into their work, and sought to de-gender their art. 1. 2. Although feminist artists have shown great interest in the depiction of nude figures (both male and female), very few feminist artists have shown interest in creating erotic work. Historical Context Becoming a Movement in the 1970s Backlash. 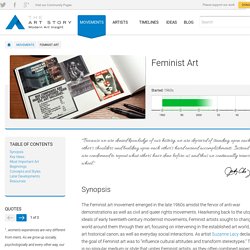 Instead we are condemned to repeat what others have done before us and thus we continually reinvent the wheel. " Synopsis The Feminist art movement emerged in the late 1960s amidst the fervor of anti-war demonstrations as well as civil and queer rights movements. Hearkening back to the utopian ideals of early twentieth-century modernist movements, Feminist artists sought to change the world around them through their art, focusing on intervening in the established art world, the art historical canon, as well as everyday social interactions. As artist Suzanne Lacy declared, the goal of Feminist art was to "influence cultural attitudes and transform stereotypes. " Key Ideas. Feminist art. 1 of 6 Introduction to feminist art In 1971 the art historian Linda Nochlin published a groundbreaking essay Why Have There Been No Great Women Artists? 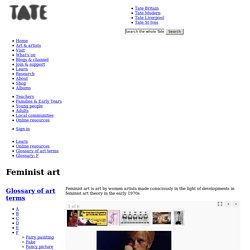 In it she investigated the social and economic factors that had prevented talented women from achieving the same status as their male counterparts. By the 1980s art historians such as Griselda Pollock and Rozsika Parker were going further, to examine the language of art history with its gender-loaded terms such as ‘old master’ and ‘masterpiece’. They questioned the central place of the female nude in the western canon, asking why men and women are represented so differently. Feminist art. Feminist art is a category of art associated with late 1960's and 1970's feminist movement. 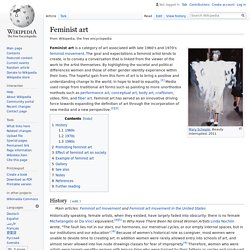 The goal and expectations a feminist artist tends to create, is to convey a conversation that is linked from the viewer of the work to the artist themselves. By highlighting the societal and political differences women and those of other gender identity experience within their lives. The hopeful gain from this form of art is to bring a positive and understanding change to the world, in hope to lead to equality. [1] Media used range from traditional art forms such as painting to more unorthodox methods such as performance art, conceptual art, body art, craftivism, video, film, and fiber art.

Feminist art has served as an innovative driving force towards expanding the definition of art through the incorporation of new media and a new perspective.[2][3] History[edit] Feminist art can be contentious to define. 1960s[edit]