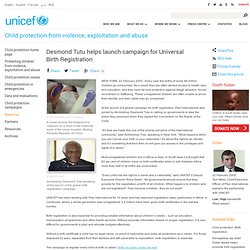 As a result, they are often denied access to health care and education, and they have far less protection against illegal adoption, forced recruitment or trafficking. These unregistered children are often unable to prove their identity, and their rights may go unrealized. At the launch of a global campaign for birth registration, Plan International was joined by Archbishop Desmond Tutu in calling on governments to take the action they promised when they signed the Convention on the Rights of the Child. “It’s time we made this one of the priority concerns of the international community,” said Archbishop Tutu, speaking in New York. “What happens when you can’t prove your birth or your nationality? Most unregistered children live in Africa or Asia. “Every child has the right to a name and a nationality,” said UNICEF’s Deputy Executive Director Rima Salah. 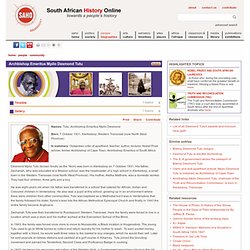 His father, Zachariah, who was educated at a Mission school, was the headmaster of a high school in Klerksdorp, a small town in the Western Transvaal (now North West Province). His mother, Aletha Matlhare, was a domestic worker. They had four children, three girls and a boy. He was eight years old when his father was transferred to a school that catered for African, Indian and Coloured children in Ventersdorp. He also was a pupil at this school, growing up in an environment where there were children from other communities.

Zachariah Tutu was then transferred to Roodepoort, Western Transvaal. In 1943, the family was forced once more to move to Munsieville, a Black location in Krugersdorp. In 1945, he began his secondary education at the Western High, a Government secondary school in the old Western Native Township, near Sophiatown. At times, he was criticised for time he spent travelling overseas. Desmond Tutu (South African archbishop) (Log-in and Password details on Library Website) Desmond Tutu. Who will lead Syria out of crisis? Who in Syria will lead the people to safety? 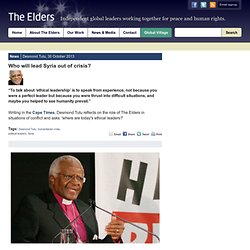 Who will prevent the great powers from causing further harm? Since the Syrian tragedy began three years ago, commentators have been quick to lambast one side or another for their lack of leadership, singling out Bashar al-Assad, or the rebels, or Russia, or the United States, or the Arab League, or the United Nations, or perhaps another entity. We are spoilt for choice. Meanwhile the war rages on and Syria's families continue to be torn apart. What overwhelms me with sadness is not the failing of one side or another, but the way this war has engulfed the world in a vacuum where peaceful appeals are hardly audible. Desmond Tutu. Known affectionately as ‘Arch’ by his fellow Elders, Desmond Tutu helped bring the group together in 2007 and served as its much-loved Chair until May 2013. 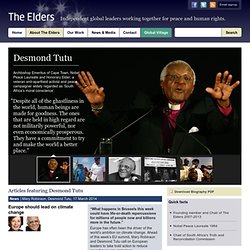 One of the world’s best known advocates for peace and reconciliation, Archbishop Tutu has travelled to Cyprus with the Elders several times to encourage reconciliation between Greek Cypriot and Turkish Cypriot communities; to Israel and the occupied Palestinian territories to promote a just and secure Middle East peace; to Côte d'Ivoire, where the Elders encouraged national reconciliation following the post-election violence of early 2011; and to Sudan and South Sudan to highlight humanitarian needs and the importance of dialogue between political leaders. Desmond Tutu Peace Centre. Desert Island Discs - Castaway : Archbishop Desmond Tutu. Russian Authorities fail to lift piracy charges against Arctic 30. Prosecuting authorities in Russia were under fire today after it was revealed that they have failed to lift charges of piracy against the Arctic 30, despite pledging to do so. 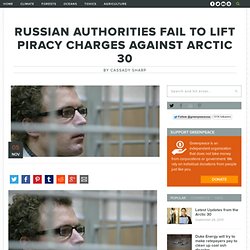 Russia’s powerful Investigative Committee announced last week that the piracy charges – which carry a 15-year jail sentence – would be replaced with charges of hooliganism. But when the thirty detainees were brought before the Committee over the course of this week, the piracy charge was not withdrawn. Instead each of them was simply served with the additional charge of hooliganism. They now stand accused of both offences, which carry a maximum sentence of 15 and 7 years, respectively. 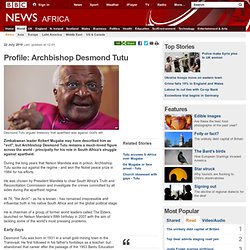 During the long years that Nelson Mandela was in prison, Archbishop Tutu spoke out against the regime - and won the Nobel peace prize in 1984 for his efforts. He was chosen by President Mandela to chair South Africa's Truth and Reconciliation Commission and investigate the crimes committed by all sides during the apartheid regime.