RENTA RED ONE MÉXICO - MONTERREY - GUADALAJARA - EPIC - SCARLET- CANON. Film and TV Jobs in the Entertainment Industry. Although negotiating a crane, carrying a heavy camera and a camera operator around a feature film set, or steering a remote head 100 ft above a location on a high-tech strada crane is a highly skilled job, the audience is unaware of this as they marvel at the resulting birds eye views and breathtaking cinematography. 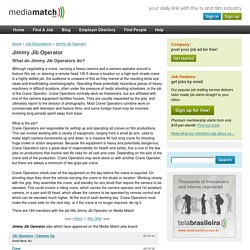 Operating these potentially hazardous pieces of heavy machinery in difficult locations, often under the pressure of hectic shooting schedules, is the job of the Crane Operator. Crane Operators normally work as freelancers, but are affiliated with one of the camera equipment facilities houses. They are usually requested by the grip, and ultimately report to the director of photography. Most Crane Operators combine work on commercials with television and feature films, and some foreign travel may be involved, involving long periods spent away from base. Who Needs Sleep? - Home. 88 Cinematographers Share the Best Professional Advice They’ve Ever Received. “What’s the best professional advice you’ve ever received?” 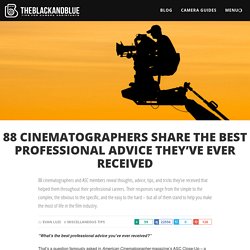 That’s a question famously asked in American Cinematographer magazine’s ASC Close-Up – a series of brief interviews with various ASC (American Society of Cinematographers) members. It’s also an extremely telling question as it demands ASC members dig for the one piece of advice most important and most effective for them. The question doesn’t just ask for general guidelines or good advice, but the best advice. At the suggestion of reader Martin Warrilow, I went through AC magazine’s online archives and pulled the answers to this question from 88 different cinematographers. Some are well-known while others are still under the radar. So get ready as these 88 ASC cameramen and camerawomen drop some serious knowledge… How to Eat Healthy on a Film Set and Avoid the Temptations of Crafty. When you have sour skittles and twizzlers constantly in supply at the craft services table and keep yourself awake by chugging Red Bulls every hour, you aren’t treating your body kindly. 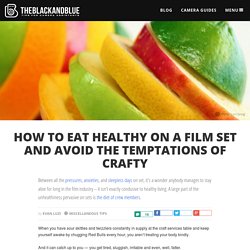 And it can catch up to you — you get tired, sluggish, irritable and even, well, fatter. Camera Assistant's Toolkit: The Ultimate Guide. “What should I have in my kit?” 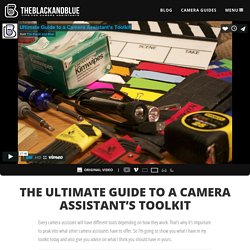 “What are the essential tools?” “Do I need to bring gear to set?” If you are just starting out within the camera department, these are crucial questions. You know that part of your success in the industry depends on obtaining the right tools to do the job and you aren’t sure where to even begin. What Do You Want to Do On Set? As soon as you step on your first set (or second or third), start exploring to find what you want to be. 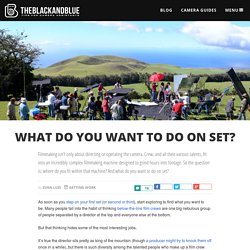 Many people fall into the habit of thinking below-the-line film crews are one big nebulous group of people separated by a director at the top and everyone else at the bottom. But that thinking hides some of the most interesting jobs. How to Pull Focus as a Camera Assistant. The last time you watched a movie, did you notice whether everything was in focus? 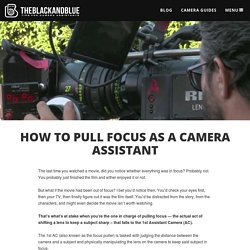 Probably not. You probably just finished the film and either enjoyed it or not. But what if the movie had been out of focus? I bet you’d notice then. You’d check your eyes first, then your TV, then finally figure out it was the film itself. Keep Your Eyes on the Talent with This Quick Focus Pulling Tip. Yeah, we’ve all been there. 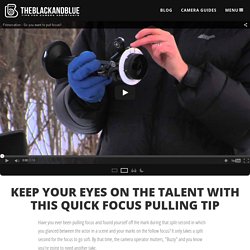 It’s a tough spot to be in, too: your vision is split between the marks you need to watch and the talent in the scene. You try your best to get in a position next to the camera to get both in your line of sight, but it doesn’t always work out. That’s where the elusiveness of “touch” and “feel” come into play, traditionally abstract concepts. Everything You’ll Ever Need to Know About Film Crews and Bottled Water.

Second only to Diet Coke as the drink of choice on set, bottled water keeps crews hydrated and on their feet at all times, especially in the hot, summer months. 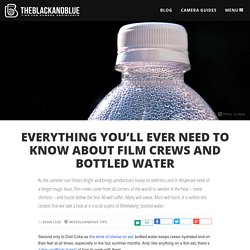 And, like anything on a film set, there’s a few unofficial “rules” of how to work with them. So today I want to talk about the setiquette of water bottles on a film set as well as some overall tips for consuming enough water throughout your day of filming. Important Reminder: Always Drink Water While Working! Video Production Archives - The Beat: A Blog by PremiumBeat. Mastering the Film Slate - An Editor's Perspective. The humble film slate (or clapper board) has withstood the test of time in filmmaking and today still plays a vital role in keeping track of every set up, take and most importantly, syncing separate sound to picture. 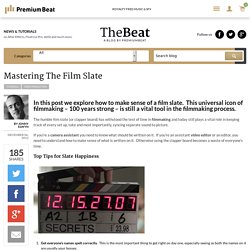 If you’re a camera assistant you need to know what should be written on it. If you’re an assistant video editor or an editor, you need to understand how to make sense of what is written on it. Otherwise using the clapper board becomes a waste of everyone’s time. Top Tips for Slate Happiness. The 7 Stupidest Assumptions You Can Make When Rigging Your Camera. I was terribly nervous the first time I secured a camera to a jib and watched it swing into the air. 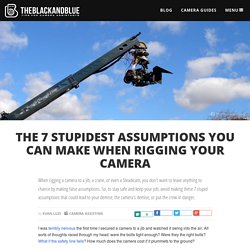 All sorts of thoughts raced through my head: were the bolts tight enough? 5 Ways the Camera Department Can Help Avoid “Fix It In Post” Headaches. Have you looked around on a film set lately? You might notice that production and post-production are beginning to merge. Walter Murch, the “Yoda of editing,” often talks about how he doesn’t think editors belong on set. He thinks they need to come to the footage fresh with untainted eyes — knowing in your mind, for instance, that a shot took a whole day to film might bias you into using it. From a philosophical standpoint, I agree with Murch. From a practical standpoint, especially with low budget filmmaking, I don’t see it happening. 7 G&E Techniques Useful to Camera Assistants. The Grip and Electric departments, collectively known as G&E, are amazing. During long scene setups, you could spend all day watching them place flags, lay track, strike lamps, drop scrims, and fly in sandbags. I have a lot of respect for them because their efforts go largely unnoticed by audiences and, at times, production itself.

But what is also fascinating about G&E is the crazy amount of techniques they have for very specific purposes — there’s a lot to learn from them. As a camera assistant (AC), you have to continually improve and evolve your knowledge to be better at your job. And the grips and juicers have a lot to teach us if you’re willing to watch and listen. 1. Find the Perfect Lighting Gels with These LEE Filters and Roscolux Pocket Guides. What’s the one thing about lighting you often overlook? Is it placement? Power? Type of lamp? For our purposes today, we’re going to say it’s lighting gels — the rolls of plastic you cut and slip over a light to change its temperature, softness, or overall output. 5 Below the Line Lessons from David Fincher’s House of Cards. “House of Cards” is now Netflix’s most-watched title. Consider me an accomplice to that success: over the course of a weekend, I watched the entire series — exactly what Netflix hoped would happen.

During the post-binge hangover, I tried to quench my thirst for more “House of Cards” by reading interviews with several key members of the production and I stumbled across one with David Fincher that was particularly revelatory. During the course of this interview with Empire, Fincher drops hints here and there about what it’s like to work with him. And what we can glean from these brief responses are some insights that, perhaps someday, help get you on a set run by Fincher himself. Cameras. The Quick and Dirty Video Guide to Marking Actors. Marking actors should be simple right? How hard is it to slap a piece of tape on the ground? You’re right — it should be simple, but there are tons of nuances to marking an actor that you might not know about.

How many resources exist for filmmakers? 3 Simple Ways to Become a Better Focus Puller Over the Weekend. The Battle with Producer George – Part 1. Useful Cinematography Smartphone Apps. Over 1,000,000 different apps have been downloaded more than 60 billion times in Apple’s iPhone/iPad App Store. Those numbers are mind blowing and prove that iOS devices are being put to use around the world as serious tools. Deciphering the Film Slate (Part 3): Twelve Examples of a Completed Slate. Deciphering the Film Slate (Part 2): Pickups, Plates, MOS, and More. Do You Make Marks on the Lens or Follow Focus? Five Stealth Methods of the Tape Measure Ninja. Film Set Lingo: Camera Department Terms – Part 2. Film Set Lingo: General Production Slang – Part 1. Film Set Lingo: Walkie Talkies and Radios – Part 3. 7 Tips for Navigating Craft Services Successfully. Ready to Wrap for Lunch? Do This First. Three Ways Camera Assistants Have to Adapt to Digital Cinema in Order to Survive. Who Needs Sleep? - Home.

Raw Stock: Why You Shouldn’t Run on a Film Set, TV Framerates and Business Card Titles. 5 Useful Cinematography Android Apps (Part 2) 88 Cinematographers Share the Best Professional Advice They’ve Ever Received. Adam Carolla Explains Why Cameramen Dress the Best. Focal Points: Learn About Grips, Dolly Zooms, and How to Read a Light Meter. 2 Easy to Use Camera Report Templates. RED ONE Camera Reports Download. 2 Easy to Use Camera Report Templates. What’s the worst thing that’s ever happened to you on set?

Perfection is the Goal, Practical is the Reality. What Camera Assistants Don’t Do. JWSOUNDGROUP. Framestore thinks 4K adoption is coming soon. 4K in the Home — Prolost. Framestore. How 4K will change everything. Pulling Focus Off the Monitor is a Bad Habit. Pulling Focus Off the Monitor is OK. Behind-the-Scenes of 75 years of Batman. How to Prep a Camera Package with David Elkins. The Camera Assistant Manual Web Site. Diffusedlight. Andra Motion Focus wants to help pull focus (or do it for you) Auto-focus and the human element. 25 Hilarious Filmmaking Meme Jokes: The Animated GIF Edition. The Life of a Camera Assistant as Told Through GIFs.

18 Hilarious Filmmaking Jokes from the Internet Meme Machine. How to Read the DP’s Mind & Stay One Step Ahead. Crew Call: The Below the Line Podcast. The Birth of the Camera Assistant. Prep time for your crew adds production value. The Five C’s of Cinematography at FreshDV. The Digital Bolex Grant for Women Cinematographers.