Lily Melrose - UK Style and Fashion Blog. Festival time is almost upon us and I'm already getting in the mood for my favourite season of them all. 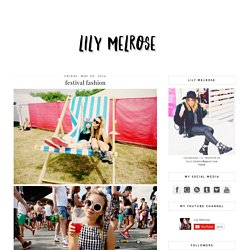 I love the feeling of standing in a field with a bunch of mates, feeling liberated and listening to awesome music. I’ve been going to music festivals since I was 14, I have countless stories to share about festivals. Its a time to see your favourite bands or kick back in the sun (or rain!) Wander With Wolves. Keeping EDM Festivals Fresh in 2015: A Chat with the Top Curators. Welcome to Festival Outlook, a supplemental column that provides more in-depth analysis for the rumors found on Consequence of Sound’s Festival Outlook. 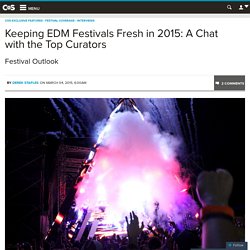 In this installment, CoS staffer Derek Staples enlists the support of talent buyers, artist coordinators, marketing managers, and curators from several of the nation’s top electronic-minded festivals to discuss keeping lineups fresh when EDM is blowing up across festivals worldwide. Just for a little background, how long does the booking process for your festivals normally take? Gary Richards, founder of HARD Events (GR): I’m always booking and looking for new music, so it’s a year-round process. Alicia Karlin, Lead Talent Buyer for Electric Forest (AK): Electric Forest is truly a year-round project. As soon as the event ends, we start thinking about the next year, surveying our fans and developing the direction for the following summer.

AK: I don’t really use any charts or sites for specific direction. PG: Exactly. CF: Not really. Go figure: an infographic guide to UK music festivals. Ever wondered how much loo roll gets used across a whole festival weekend? 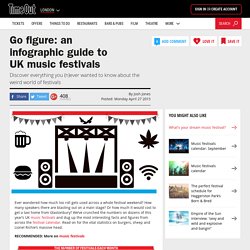 How many speakers there are blasting out on a main stage? Or how much it would cost to get a taxi home from Glastonbury? Sign in. Smaller vs Bigger Music Festivals - Professional Fans. It’s not a secret that music festivals have become the “it” thing of the past few years. 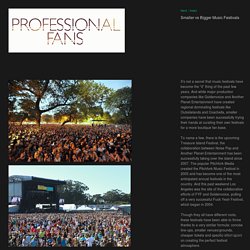 And while major production companies like Goldenvoice and Another Planet Entertainment have created regional dominating festivals like Outsidelands and Coachella, smaller companies have been successfully trying their hands at curating their own festivals for a more boutique fan base. To name a few, there is the upcoming Treasure Island Festival, the collaboration between Noise Pop and Another Planet Entertainment has been successfully taking over the island since 2007. 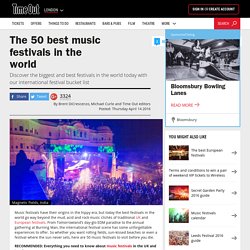 Held on polo grounds in the desert, Coachella is a camping destination, unlike most urban American festivals, though the sand-adverse seeking five-star shelter can shack up in nearby Palm Springs.

Facts and Figures. Why do people attend? Woodstock. Rock star Shaun Ryder is happy to drop the sex and drugs from rock ‘n’ roll – after becoming an older dad on the school gates. Shaun Ryder freely admits to using a range of drugs to help to capture and develop his band’s music, sound and style through its formative years in the 1980s. 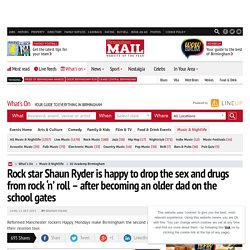 Now the Happy Mondays' frontman has a completely different way of getting his kicks... by taking his six and seven-year-old daughters on the school run. “I’m 53 now and it doesn’t bother me one bit being an older dad at the school gates,” says Shaun, who lives in the Worsley part of Salford where neighbours include Coronation Street stars and Manchester United footballers. “I am often on the school run. “I had four children first time around and they are all now grown up. “When you are on that hamster wheel (of success) and always moving on to the next thing, you can’t take it all in and enjoy it like I can now. Watch No Cameras Allowed Online Free Putlocker. Burning Man Festival. The Burning Man Festival has grown from a small group of people gathering spontaneously to a community of over 48,000 people. 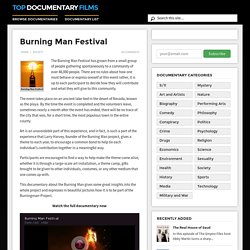 There are no rules about how one must behave or express oneself at this event rather, it is up to each participant to decide how they will contribute and what they will give to this community. The event takes place on an ancient lake-bed in the desert of Nevada, known as the playa. By the time the event is completed and the volunteers leave, sometimes nearly a month after the event has ended, there will be no trace of the city that was, for a short time, the most populous town in the entire county.

Art is an unavoidable part of this experience, and in fact, is such a part of the experience that Larry Harvey, founder of the Burning Man project, gives a theme to each year, to encourage a common bond to help tie each individual’s contribution together in a meaningful way. Watch the full documentary now.