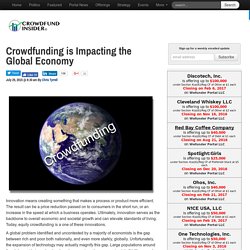 The result can be a price reduction passed on to consumers in the short run, or an increase in the speed at which a business operates. Ultimately, innovation serves as the backbone to overall economic and societal growth and can elevate standards of living. Today, equity crowdfunding is a one of these innovations. A global problem identified and uncontested by a majority of economists is the gap between rich and poor both nationally, and even more starkly, globally. Unfortunately, the expansion of technology may actually magnify this gap. The Subtle Risks in Equity Crowdfunding the Industry Is Ignoring. Crowdfunding, the practice of funding a cause or project by raising small amounts of money from a large number of people, is a concept popularised by rewards and donations based crowdfunding platforms, the likes of Kickstarter, Indigogo and Kiva. 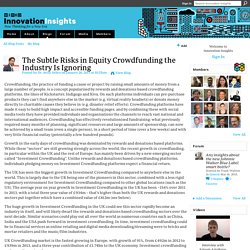 On such platforms individuals can pre-purchase products they can’t find anywhere else in the market (e.g. virtual reality headsets) or donate money directly to charitable causes they believe in (e.g. disaster relief efforts). Crowdfunding platforms have made it easy to build high impact and accessible funding pages, and by combining these with social media tools they have provided individuals and organisations the channels to reach vast national and international audiences. Growth in the early days of crowdfunding was dominated by rewards and donations based platforms. The UK has seen the biggest growth in Investment Crowdfunding compared to anywhere else in the world. Inside Investment Crowdfunding. Innovation in economic development: new incentives for the 21st century - The Next Silicon Valley. As is widely accepted nowadays, economic development doesn’t involve initiatives implemented in isolation – it’s all about developing the entire ecosystem of incentives, infrastructure, entrepreneurship and talent. 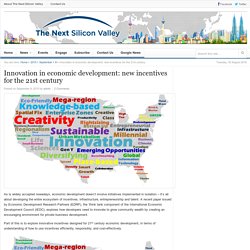 A recent paper issued by Economic Development Research Partners (EDRP), the ‘think tank component of the International Economic Development Council (IEDC), explores how developers need to innovate to grow community wealth by creating an encouraging environment for private business development. Part of this is to explore innovative incentives designed for 21st century economic development, in terms of understanding of how to use incentives efficiently, responsibly, and cost-effectively.

Definition of incentiveAn incentive is a reward intended to induce, incite, or spur action. Economic developers aim to improve the economic and social well-being of their communities by increasing private sector investment and employment. For more information visit the IEDC web site. Technavio - Discover Market Opportunities. Outlook of the global crowdfunding market Technavio’s market research analyst predicts the global crowdfunding market to grow at an impressive CAGR of nearly 27% by 2020. 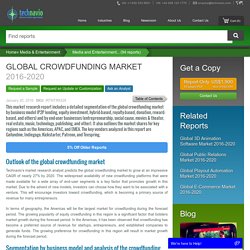 The widespread availability of new crowdfunding platforms that were made available for a wide array of end-user segments is a key factor that promotes growth in this market. Crowdfunding is the new seed funding for innovation. Crowdfunding is not necessarily new (remember the story behind the Statue of Liberty), but what it is doing in the modern age is funding an unprecedented global wave of innovation. 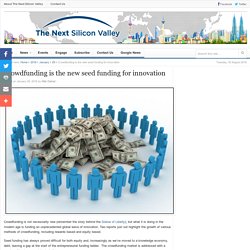 Two reports just out highlight the growth of various methods of crowdfunding, including rewards based and equity based. Seed funding has always proved difficult for both equity and, increasingly as we’ve moved to a knowledge economy, debt, leaving a gap at the start of the entrepreneurial funding ladder. The crowdfunding market is addressed with a number of business models, including: Peer-to-peer (P2P) lendingReward-basedEquity investmentDonationHybrid-basedRoyalty-based.

Wb crowdfundingreport v12. Current State of Crowdfunding in Europe « CrowdfundingHub. The alternative finance industry is a young industry and there is not a universally accepted taxonomy yet to describe the different actors in the industry. 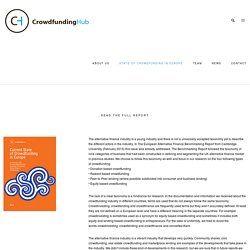 In The European Alternative Finance Benchmarking Report from Cambridge University (February 2015) this issue was already addressed. The Benchmarking Report followed the taxonomy of nine categories of business that had been constructed in defining and segmenting the UK alternative finance market in previous studies. We choose to follow this taxonomy as well and focus in our research on the four following types of crowdfunding: • Donation based crowdfunding • Reward based crowdfunding • Peer-to-Peer lending (where possible subdivided into consumer and business lending) • Equity based crowdfunding The lack of a clear taxonomy is a hindrance for research. In the documentation and information we received about the crowdfunding industry in different countries, terms are used that do not always follow the same taxonomy. Journals.uchicago. Culture CrowdMAPPING THE BENEFITS OF CROWDFUNDING FOR THE CULTURAL AND CREATIVE SECTORS.

Two years after our initial research the market for crowdfunding in the cultural and creative industries has expanded exponentially across Europe and the rest of the world. 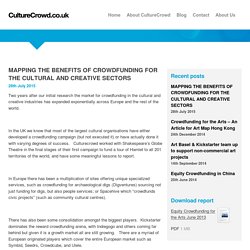 In the UK we know that most of the largest cultural organisations have either developed a crowdfunding campaign (but not executed it) or have actually done it with varying degrees of success. Culturecrowd worked with Shakespeare’s Globe Theatre in the final stages of their first campaign to fund a tour of Hamlet to all 201 territories of the world, and have some meaningful lessons to report. In Europe there has been a multiplication of sites offering unique specialized services, such as crowdfunding for archaeological digs (Digventures) sourcing not just funding for digs, but also people services; or Spacehive which “crowdfunds civic projects” (such as community cultural centres).

There has also been some consolidation amongst the biggest players. Article, 2014. Crowdfundin in the wake of global financial crisis.

Y: In the wake of the global economic crisis, crowdfunding has become an increasingly significant alternative form of financing. Of the various business models that have evolved during recent years, this study focuses on equity, credit, reward and donation-based models. The investor/supporter motivations of crowdfunders are different from the objectives of traditional financiers. Besides the benefits of crowdfunding, its risks should be also mentioned as they will shape the future development of this particular financial innovation. – natalf 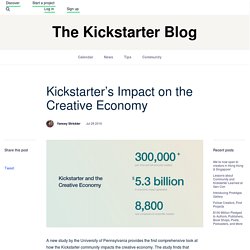 The study finds that Kickstarter projects have: Employed 283,000 part-time collaborators in bringing creative projects to life. Created 8,800 new companies and nonprofits, and 29,600 full-time jobs. Generated more than $5.3 billion in direct economic impact for those creators and their communities. WEF The future of financial services.