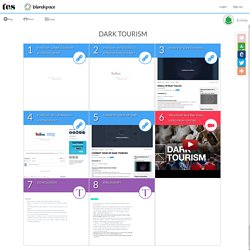 Dark tourism is a special type of tourism business which doesn’t appeal to everyone but is having an important role in reflecting the past to present, delivering information and causing not only personal emotions but also broader discussion and conversation about the dark side of history and humanity. British Council. By Linda Baxter Imagine the scene. 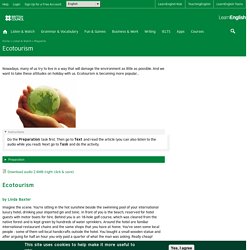 You're sitting in the hot sunshine beside the swimming pool of your international luxury hotel, drinking your imported gin and tonic. In front of you is the beach, reserved for hotel guests with motor boats for hire. Behind you is an 18-hole golf course, which was cleared from the native forest and is kept green by hundreds of water sprinklers. Around the hotel are familiar international restaurant chains and the same shops that you have at home. Ecotourism - Breaking News English Lesson - ESL. 1. 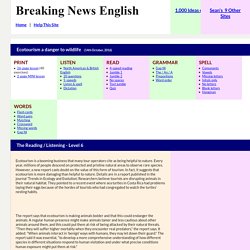 ECOTOURISM: Students walk around the class and talk to other students about ecotourism. Change partners often and share your findings. 2. Could space tourism become a reality? Space Tourism. The Best Space Holiday Money Can Buy. ISIS Syrian conflict: Russian travel company to sell war tourism in Syria. A Syrian man displays used items for sale on a street in a rebel-controlled area of the northern Syrian city of Aleppo on December 12, 2015. 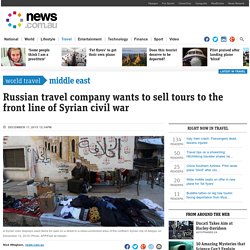 Photo: AFP/Fadi Al-Halabi. LEADERS from 18 countries led by the US and Russia are set to meet in New York on Friday to discuss a peace solution in Syria, but one travel company in banking on the brutal civil war continuing. Syria warzone tours planned by Russian travel company. War Tourists Flock to Syria’s Front Lines. Syria’s conflict is drawing a motley crew of adventure-seekers and adrenaline with murky motivations—and little experience with surviving in war zones. 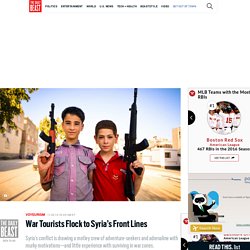 When Tyler Smith visited northern Syria this January, he found himself in a dance-off with Syrian rebels at a training area near al-Bab. “I tried to show them how to do the worm,” the 20-year-old American chuckles. “They taught me how to disassemble and reassemble an AK-47.” The trip was Smith’s first-ever venture to the Middle East, a five-day jaunt to a war-ravaged village in rebel territory north of Aleppo with his two friends, Joe Alencar and Karar Mousa. The guys all attended different colleges, so they timed the trip to align with a break between semesters.

The Rise of Dark Tourism - Debra Kamin. EIN ZIVAN, Golan Heights—Kobi Marom squints into the morning sun and gestures at the rolling green hills beneath the Quneitra viewpoint, where the crumbled Syrian city of Quneitra juts up against the Syrian-Israeli border fence. 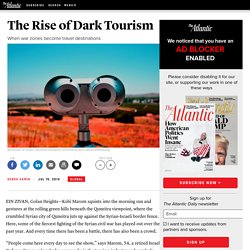 Here, some of the fiercest fighting of the Syrian civil war has played out over the past year. And every time there has been a battle, there has also been a crowd. Is Slum Tourism Really All That Bad? A Rio Favela. 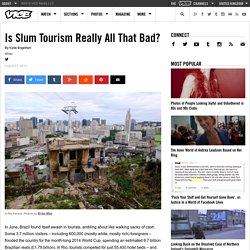 Picture by Brian Mier In June, Brazil found itself awash in tourists, ambling about like walking sacks of cash. Some 3.7 million visitors – including 600,000 (mostly white, mostly rich) foreigners – flooded the country for the month-long 2014 World Cup, spending an estimated 6.7 billion Brazilian reals (£1.79 billion). In Rio, tourists competed for just 55,400 hotel beds – and as is traditional anywhere with tourists, were completely ripped off. The Rights and Wrongs of Slum Tourism - India Real Time. Reality Tours and Travels A collage of pictures from Dharavi by Reality Tours and Travels which organizes tours in the slum. 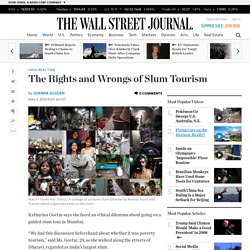 Katharina Goetze says she faced an ethical dilemma about going on a guided slum tour in Mumbai. Slum tourism: Patronising or social enlightenment? There is a growing trend for tourists to seek out poverty-blighted neighbourhoods when they go on holiday, to get a sense of real life for the poorest communities there. 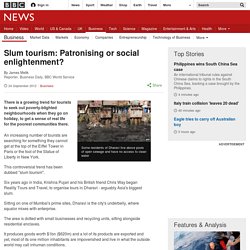 An increasing number of tourists are searching for something they cannot get at the top of the Eiffel Tower in Paris or the foot of the Statue of Liberty in New York. This controversial trend has been dubbed "slum tourism". Six years ago in India, Krishna Pujari and his British friend Chris Way began Reality Tours and Travel, to organise tours in Dharavi - arguably Asia's biggest slum. Sitting on one of Mumbai's prime sites, Dharavi is the city's underbelly, where squalor mixes with enterprise.

The area is dotted with small businesses and recycling units, sitting alongside residential enclaves. Fw:Thinking: The Podcast. Dark tourism: why are we attracted to tragedy and death? Dark tourism: Travel Weekly. It can be morbid. 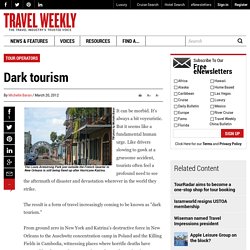 It's always a bit voyeuristic. But it seems like a fundamental human urge. Like drivers slowing to gawk at a gruesome accident, tourists often feel a profound need to see the aftermath of disaster and devastation wherever in the world they strike. The result is a form of travel increasingly coming to be known as "dark tourism. " People are Traveling to War Zones for Tourism.

Warzone tourism is a new trend. Sri Lankan soldiers in ceremonial uniform march at a memorial during National War Hero's Day. Sri Lanka is rapidly becoming a tourism hot spot.Credit: Getty Images Andrew Drury’s awakening took place in a Congolese banana plantation as he ran for his life from a knife-wielding farmer. The British builder had wandered off from a tour of Uganda with his cousin Nigel Green, and unwittingly crossed a border into a war-torn nation.

"The chase went for a long time and the stress and danger made us realize there was more to the world than travel tours," he told Metro. "Coming back from there we knew we wanted to do it more. " In the following 22 years, Drury and his cousin have explored many of the world’s most dangerous conflict areas: Iraq, Afghanistan, Chechnya, Mogadishu, Burma. But Drury, 47, believes he is now “addicted” to such trips, although it is for the “living history” as much as the danger. He is not alone. The sector’s rapid growth has led to more lurid packages. . • Sri Lanka.