How to bring better ethics to data science. The 7 biggest problems facing science, according to 270 scientists. Science is in big trouble. 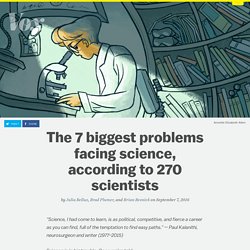 Or so we’re told. In the past several years, many scientists have become afflicted with a serious case of doubt — doubt in the very institution of science. As reporters covering medicine, psychology, climate change, and other areas of research, we wanted to understand this epidemic of doubt. So we sent scientists a survey asking this simple question: If you could change one thing about how science works today, what would it be and why? We heard back from 270 scientists all over the world, including graduate students, senior professors, laboratory heads, and Fields Medalists. The scientific process, in its ideal form, is elegant: Ask a question, set up an objective test, and get an answer.

Scientists aren’t gods. They deserve the same scrutiny as anyone else. I am not obese or dying of cancer. 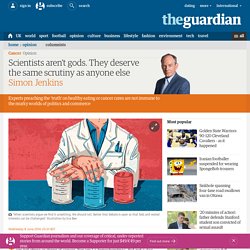 Nor am I a hypochondriac. But not a day passes without my absorbing news of imminent salvation or disaster from some branch of science. And whereas the panjandrums of big science used to maintain an aura of lofty objectivity as they demand our attention and cash, they now seem all over the shop, fighting like rats in a sack. Take obesity. I am reeling from last month’s BBC knuckle fight between the dietician Aseem Malhotra and the government obesity tsar, Susan Jebb, over whether fat makes you fat. You might think you know, but do you really? Important scientific words expla...

A fan theory about how R+L=J is also a theory, but that's not what scientists mean when they use that word. 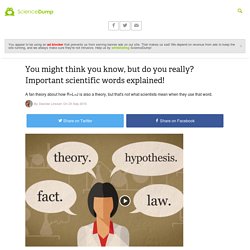 I don't know about you, but I'm getting kind of sick of people misunderstanding the words theory and hypothesis and turning them into something bad. Whenever I hear someone say that evolution is only a theory, I am immediately reminded of Wallace Shawn's character Vizzini from The Princess Bride going around yelling "inconceivable! " at every turn, and in really having no clue what it actually means. Twentieth Century Fox. Is Breakfast Really the Most Important Meal of the Day?

Breakfast has been made out to be one of the most important meals of the day. 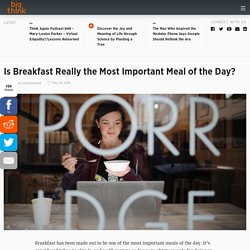 It’s considered taboo to skip it, and we'll even go so far as to shame people for doing so. After all, making time to eat this one meal allows our lives to improve dramatically, or so it seems. Last Week Tonight with John Oliver: Scientific Studies (HBO) Theory vs. Hypothesis vs. Law… Explained! Gravitational Waves Detected, Confirming Einstein’s Theory. How the Microscope Redefined the Fact. A picture may be worth a thousand words, but the inverse is also true: A word is worth a thousand pictures. 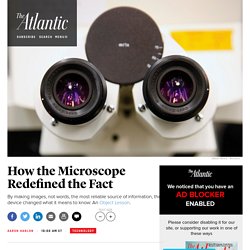 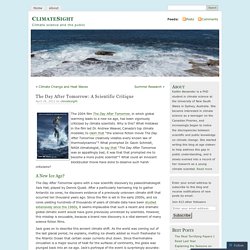 Why is this? What mistakes in the film led Dr. Andrew Weaver, Canada’s top climate modeller, to claim that “the science-fiction movie The Day After Tomorrow creatively violates every known law of thermodynamics”? What prompted Dr. History of the Scientific Method - How Science Became Important. The history of the scientific method is a fascinating and long one, covering thousands of years of history. 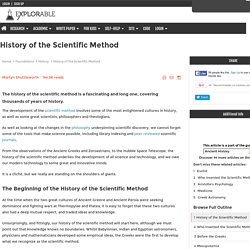 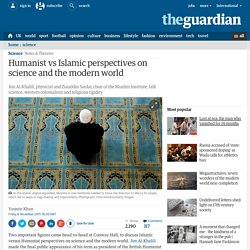 Jim Al-Khalili made the final public appearance of his term as president of the British Humanist Association during this stimulating, and at times provoking, debate with Ziauddin Sardar, chair of the Muslim Institute. Al-Khalili advocated the values of the European Enlightenment, arguing that ever since the “Age of Reason” took hold during the 18th century, Humanists have looked to science instead of religion to explore and comprehend the world. Sardar upheld the view that it is the combination of faith and reason that offers a fuller understanding of the world, maintaining that it was this worldview that enabled the development of science in the Islamic golden Age. A practising Muslim, Sardar is on an independent mission to promote rational, considered thought in interpreting the Qur’an. Debate over chimpanzee 'accent' study.

Image copyright Jamie Norris / University of York A debate is unfolding among primatologists about a study, published in February, which reported that chimpanzees can adapt their grunts to communicate with new neighbours. 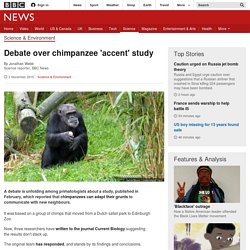 It was based on a group of chimps that moved from a Dutch safari park to Edinburgh Zoo. Now, three researchers have written to the journal Current Biology suggesting the results don't stack up. Top 5 misconceptions about evolution. CERN has detected extremely rare particle decay for the first time. Researchers working at CERN in Switzerland have detected a never-before-seen subatomic process that was "harder to find than the famous Higgs particle", and it could make or break our understanding of the Universe. 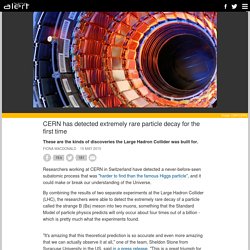 By combining the results of two separate experiments at the Large Hadron Collider (LHC), the researchers were able to detect the extremely rare decay of a particle called the strange B (Bs) meson into two muons, something that the Standard Model of particle physics predicts will only occur about four times out of a billion - which is pretty much what the experiments found. "It's amazing that this theoretical prediction is so accurate and even more amazing that we can actually observe it at all," one of the team, Sheldon Stone from Syracuse University in the US, said in a press release. "This is a great triumph for the LHC and both experiments. " "It’s not way off the Standard Model prediction, but it’s low enough to keep us questioning,” said Butler. Never-ending universe. Steven WeinbergTO EXPLAIN THE WORLD The discovery of modern science416pp. Allen Lane. £20.978 0 241 19662 5US: Harper. $28.99. 978 0 06 234665 0 Published: 6 May 2015 Galileo demonstrating the law of gravity, 1839, by Giuseppe Bezzuoli Photograph: © Leemage/UIG via Getty Images We hope you enjoy this free piece from the TLS, which is available every Thursday in print and via the TLS app.

Richard Feynman - Ode To A Flower. The science behind the Palaeo diet. Why doctors and scientists are so anxious about the rise of pop science. To hear Oliver Sacks tell it, writing books for a mass audience was once considered one of the worst things a doctor could do. In his new memoir On the Move, Sacks recalls the day his first book was published in 1970.

Born in 1933 to two prominent doctors, Sacks happened to be staying in his family's London home at the time. Oliver Sacks's new memoir, On The Move. (Knopf via Amazon.com) "My father came into my bedroom, pale and shaking," Sacks writes, "holding the Times in his hands. Nowadays, of course, that's changed. Scientists Alter DNA in Human Embryos. Defending Darwin. I’M OFTEN ASKED what I do for a living. My answer, that I am a professor at the University of Kentucky, inevitably prompts a second question: “What do you teach?” Responding to such a question should be easy and invite polite conversation, but I usually brace for a negative reaction. At least half the time the person flinches with disapproval when I answer “evolution,” and often the conversation simply terminates once the “e-word” has been spoken.

Occasionally, someone will retort: “But there is no evidence for evolution.” The magic of consciousness. Top 5 misconceptions about evolution. Homeopathy not effective for treating any condition, Australian report finds. Homeopathy is not effective for treating any health condition, Australia’s top body for medical research has concluded, after undertaking an extensive review of existing studies. Homeopaths believe that illness-causing substances can, in minute doses, treat people who are unwell. By diluting these substances in water or alcohol, homeopaths claim the resulting mixture retains a “memory” of the original substance that triggers a healing response in the body.

These claims have been widely disproven by multiple studies, but the National Health and Medical Research Council (NHMRC) has for the first time thoroughly reviewed 225 research papers on homeopathy to come up with its position statement, released on Wednesday. The Science of Why We Don't Believe Science. How our brains fool us on climate, creationism, and the vaccine-autism link.

History of the scientific language

What would Wittgenstein say about that dress? Radio 3 Essay by BBC- Nature of Science. The Nature of science (NOS) is an overarching theme in the biology, chemistry and physics courses. Relativity Isn't Relative. Should Pluto regain planet status? A Harvard science historian thinks so. Peter Higgs: I wouldn't be productive enough for today's academic system. Peter Higgs, the British physicist who gave his name to the Higgs boson, believes no university would employ him in today's academic system because he would not be considered "productive" enough. The emeritus professor at Edinburgh University, who says he has never sent an email, browsed the internet or even made a mobile phone call, published fewer than 10 papers after his groundbreaking work, which identified the mechanism by which subatomic material acquires mass, was published in 1964.

Fluid Experiments Support Deterministic “Pilot-Wave” Quantum Theory. For nearly a century, “reality” has been a murky concept. 10 Scientific Ideas That Scientists Wish You Would Stop Misusing. The Moons of Jupiter — The Message.

Ethical Decision Making. Myth: "Eventually, science will explain everything." “Eventually Science Will Explain Everything” The Island of Knowledge: How to Live with Mystery in a Culture Obsessed with Certainty and Definitive Answers. By Maria Popova “We strive toward knowledge, always more knowledge, but must understand that we are, and will remain, surrounded by mystery.” Neil deGrasse Tyson: The Next Great Scientific Breakthroughs.

Role of women in science

NASA Just Released The Largest Picture Ever Taken And It Will Shake Up Your U... The Cathedral of Computation. Carl Sagan’s Message to Mars Explorers, with a Gentle Warning. The real science of science fiction. Michio Kaku: Is God a Mathematician? The Scientific Method. Sir Karl Popper's "Science as Falsification" Why We Don’t Believe In Science. What Should Teachers Say to Religious Students Who Doubt Evolution? 10 Greatest Ideas in the History of Science. Einstein and 'Where Science and Religion Coexist' What is school science for? Who is it for? Where Is the Proof in Pseudoscience? Evolution-creation debate unlikely to change minds. Five science ‘facts’ we learnt at school that are plain wrong. God, Darwin and My College Biology Class. A Theoretical Physicist Explains Why Science Is Not About Certainty.

Great moments in Science (if Twitter had existed) 10 Scientific Ideas That Scientists Wish You Would Stop Misusing. Whole Foods: America’s Temple of Pseudoscience. Not all scientific studies are created equal - David H. Schwartz. The Science of “Intuition” Why Pluto is No Longer a Planet. 6 Angry Letters Kids Sent Neil deGrasse Tyson About Pluto. The Baloney Detection Kit: A 10-Point Checklist for Science Literacy.

BBC’s Volatile History of Chemistry. Thomas Kuhn: the man who changed the way the world looked at science. What Is Science? From Feynman to Sagan to Asimov to Curie, an Omnibus of Definitions. Open Questions in Physics. Top 10 Unsolved Mysteries of Science.

The 20 big questions in science. Bioinformatician at large: My Emotions in Science. What Is Pseudoscience?