OSINT and other intel 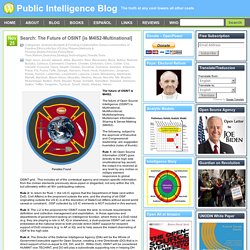 2008 Open Source Intelligence (Strategic) 2.0. Now that everyone is paying attention, this is being posted in full text online in support of a larger M4IS2 / OSE dialog. 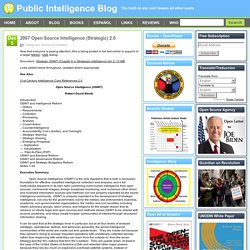 Document: Strategic OSINT (Chapter 6 in Strataegic Intelligence Vol 2) 10 MB Links added below throughout, updated where appropriate. See Also: 21st Century Intelligence Core References 2.0. OSINT Resources - The Grey Network. Why: This site is a guide to resources for finding information on the internet and some tools that allow it to be aggregated and interpreted into actionable intelligence. 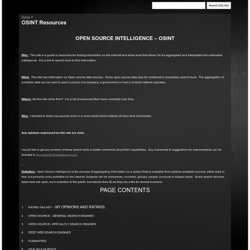 It is a link to search tools to find information. What: This site has information on Open source data sources. Some open source data may be contained in proprietary search tools. The aggregation of available data can be used to paint a picture of a company, a government or how a criminal network operates. . OPEN SOURCE INTELLIGENCE (OSINT) NEWS. OSINT Tools - Recommendations List. With the New Year fast approaching I thought now would be a great time to post the first draft of some recommended Open Source Intelligence (OSINT) gathering tools and resources. 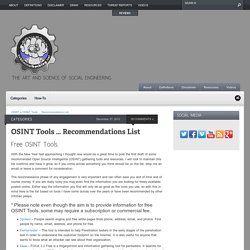 I will look to maintain this list overtime and have it grow, so if you come across something you think should be on the list, drop me an email or leave a comment for consideration. The reconnaissance phase of any engagement is very important and can often save you alot of time and of course money. If you are really lucky you may even find the information you are looking for freely available posted online.

Either way the information you find will only be as good as the tools you use, so with this in mind here is the list based on tools I have come across over the years or have been recommended by other InfoSec peeps. * Please note even though the aim is to provide information for free OSINT Tools, some may require a subscription or commercial fee. OSINT. OSINT. Readings – i-intelligence. Taxonomy of OSINT Sources. List of Releases. 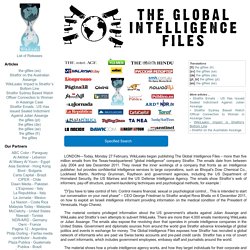 The emails date from between July 2004 and late December 2011. They reveal the inner workings of a company that fronts as an intelligence publisher, but provides confidential intelligence services to large corporations, such as Bhopal’s Dow Chemical Co., Lockheed Martin, Northrop Grumman, Raytheon and government agencies, including the US Department of Homeland Security, the US Marines and the US Defense Intelligence Agency. The emails show Stratfor’s web of informers, pay-off structure, payment-laundering techniques and psychological methods, for example : "[Y]ou have to take control of him. The material contains privileged information about the US government’s attacks against Julian Assange and WikiLeaks and Stratfor’s own attempts to subvert WikiLeaks. Comment. Traiter de l'information stratégique nécessite une grille de lecture méthodologique. L'Afnor s'est elle-même penchée sur ce sujet, en émettant notamment un fascicule (FD X050-52) traitant du management de l'information stratégique. 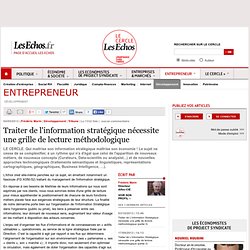 Market OSINT - 3 Tips to convince YOU to use it! OSINT (Open-Source Intelligence) - InfoSec Institute. With an estimated 80% of required information available for use in an open source for specific information vital for a deep analysis in newspapers, magazines, industry newsletters, television transcripts, and blogs. 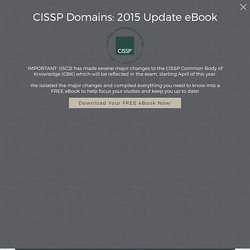 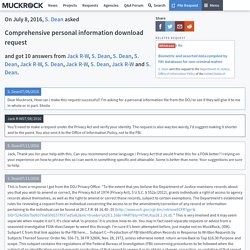 I'm asking for a personal information file from the DOJ to see if they will give it to me in whole or in part. Sheila You'll need to make a request under the Privacy Act and verify your identity. The request is also way too wordy, I'd suggest making it shorter and to the point. OSINT. OSINT Tools - Recommendations List. Resources - Toddington. Online Search and Security Tools and Resources for the Investigative and Intelligence Professional Last updated: April 12, 2019.

While there are a large number of search resources available online, it is often challenging to find the most effective tool for locating a specific type of data. Automating OSINT Blog. Free Python Webinar Sign up for one of my free Python webinars where I teach you the basics in an hour or less. 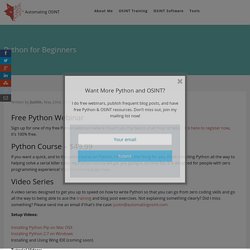 People are newly empowered to uncover hidden information, expose corruption and bring the truth to light. Through a series of short films, video interviews, guides and resources, Exposing the Invisible looks at different techniques, tools and methods along with the individual practices of those working at the new frontiers of investigation. We hope that Exposing the Invisible will inspire a new generation of people committed to transparency and accountability. New movies, interviews, guides and resources will be uploaded to our website regularly. Showing Evidence. Watching Out for Yourself.

Open Source Intelligence Brasil. Decoding Data. Decoding Data Overview Decoding Data is the first in a series of Guides that Exposing the Invisible will bring out in 2016. This one, like those coming, is based on materials that we produced while working on Exposing the Invisible along with new material we commissioned. SpiderFoot. Utilises a shedload of data sources; over 40 so far and counting, including SHODAN, RIPE, Whois, PasteBin, Google, SANS and more. Designed for maximum data extraction; every piece of data is passed on to modules that may be interested, so that they can extract valuable information. No piece of discovered data is saved from analysis.

Runs on Linux and Windows. Links. Datasets - Page 1 - data.gov.au. Skip Trace Links. Are you looking for someone? This is the place to start! There are many resources available on the Internet to help you find people. You will also find several links below pertaining to collections. Disclaimer: These links take you to outside of the ECSI site. ECSI is not responsible for the content or accuracy of the information presented on other sites.

If you are looking for someone, try one of these sites. Information retrieval tools. California Bill Seeks Phone Crypto Backdoor. A week after a New York legislator introduced a bill that would require smartphone vendors to be able to decrypt users’ phones on demand from law enforcement, a California bill with the same intent has been introduced in that state’s assembly. On Wednesday, California Assemblyman Jim Cooper submitted a bill that has remarkably similar language to the New York measure and would require that device manufacturers and operating system vendors such as Apple, Samsung, and Google be able to decrypt users’ devices.

The law would apply to phones sold in California beginning Jan. 1, 2017. Inside the Spy Mapping Agency's Virtual Reality Lab. About. Open Source Intelligence Techniques. Live Events Online Resources Blog Podcast Books Contact. Global Surveillance ‹ Log In. Osintframework. Automating OSINT Blog. On May 20, 2015 the ODNI released a trove of documents called “Bin Laden’s Bookshelf“. This included all kinds of materials including letters he had written, books he was reading and other various bits of information. This document released piqued my interest primarily because I was interested to see what the most common thing was that Bin Laden wrote about. Cryptome. OSINT Tools Recommendations List Subliminal Hacking. Open-source intelligence.

AIA%20Datafeed%20Guide.pdf. OSINT. Automating OSINT Blog. I will be the first to tell you that I know little about forensics compared to most law enforcement or private forensic examiners. One thing that I always found amazing was looking at the result of a forensic acquisition and seeing all of that magical data flowing out from it. Email addresses, phone numbers, usernames, social […] In a previous blog post I covered how to utilize the YouTube API to find the preview images for videos and then reverse search them using the TinEye API.

Find the source of your leaks.