Nettigo. We introduce you a tinyBrd - small ATtiny board that we developed for our private use, but it's so good that we decided to show it to you. 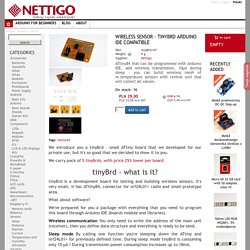 We carry pack of 5 tinyBrds, with price 25% lower per board tinyBrd is a development board for testing and building wireless sensors. It's very small, it has ATtiny84, connector for nrf24L01+ radio and small prototype area. What about software? We've prepared for you a package with everything that you need to program this board through Arduino IDE (boards module and libraries). Wireless communication You only need to write the address of the main unit (receiver), then you define data structure and everything is ready to be send. Shop arduino pro mini 3.3v online Gallery - Buy arduino pro mini 3.3v for unbeatable low prices on AliExpress.com. Sans titre. MySensors - Welcome. Home Sensor Network – Part 1: Wiring Together the 802.11 Chip And nRF24L01 Chip.

In this part of the prototype, we will build a “base station” that will (eventually!) 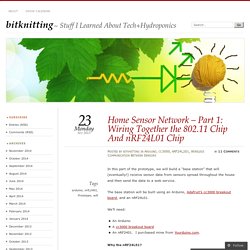 Receive sensor data from sensors spread throughout the house and then send the data to a web service. The base station will be built using an Arduino, Adafruit’s cc3000 breakout board, and an nRF24L01. We’ll need: An ArduinoA cc3000 breakout boardAn nRF2401. I purchased mine from Yourduino.com. I’m exploring different wireless technologies that are best suited for in home communications. Each one is optimal for a few scenarios. I am new to in-home networks. Time to connect the nRF2401 to a breadboard. I decided the simplest way to connect the nRF2401 to the breadboard was by using a solid ribbon of male to female cables I separated out 8 – which made it easy to follow the cable connections based on the information in this post.

Top View Bottom View Pinout. Hey reddit! I posted about a new RF24 Arduino radio library fork I've been working on and got some great feedback. Its about complete, this is the release, and these are some of the results... : arduino. TMRh20s Project Blog. Arduino: Using the full potential of NRF24L01 radio modulesA New, Optimized Fork of the RF24 Radio Library: High speed data transfers and more! 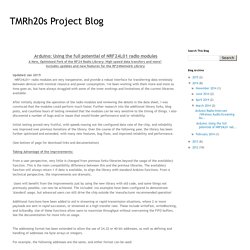 Includes updates and new features for the RF24Network Library Updated Jan 2015 NRF24L01+ radio modules are very inexpensive, and provide a robust interface for transferring data wirelessly between devices with minimal resource and power consumption. I've been working with them more and more as time goes on, but have always struggled with some of the inner workings and limitations of the current libraries available.

After initially studying the operation of the radio modules and reviewing the details in the data sheet, I was convinced that the modules could perform much faster. Further research into the additional library forks, blog posts, and countless hours of testing revealed that the modules can be very sensitive to the timing of things. Optimized High Speed NRF24L01+ Driver Class Documenation: Optimized High Speed Driver for nRF24L01(+) 2.4GHz Wireless Transceiver. This library fork is designed to be... 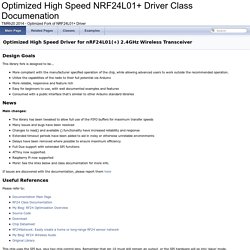 More compliant with the manufacturer specified operation of the chip, while allowing advanced users to work outside the recommended operation. Utilize the capabilities of the radio to their full potential via Arduino More reliable, responsive and feature rich Easy for beginners to use, with well documented examples and features Consumed with a public interface that's similiar to other Arduino standard libraries Main changes: The library has been tweaked to allow full use of the FIFO buffers for maximum transfer speedsMany issues and bugs have been resolvedChanges to read() and available () functionality have increased reliability and responseExtended timeout periods have been added to aid in noisy or otherwise unreliable environmentsDelays have been removed where possible to ensure maximum efficiencyFull Due support with extended SPI functionsATTiny now supported.Raspberry Pi now supportedMore!

Finally got all RPi & UNO combinations working for nRF24L01. AVRLib/nRF24L01 - TinkerWiki. The Nordic Semiconductor nRF24L01 is a transceiver chip operating in the 2.4GHz band. 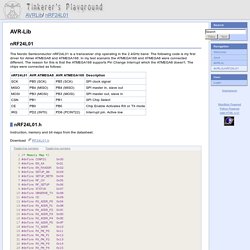 The following code is my first driver for Atmel ATMEGA8 and ATMEGA168. In my test scenario the ATMEGA168 and ATMEGA8 were connected different. The reason for this is that the ATMEGA168 supports Pin Change Interrupt which the ATMEGA8 doesn't. The chips were connected as follows: nRF24L01.h Instruction, memory and bit maps from the datasheet. Download RF24L01.h Toggle line numbersToggle line numbers mirf.h. Nrf24L01-2.4GHz-HowTo. Having two or more Arduinos be able to communicate with each other wirelessly over a distance opens lots of possibilities:Remote sensors for temperature, pressure, alarms, much moreRobot control and monitoring from 50 feet to 2000 feet distancesRemote control and monitoring of nearby or neighborhood buildingsAutonomous vehicles of all kinds These are a series of 2.4 GHz Radio modules that are all based on the Nordic Semiconductor nRF24L01+ chip. 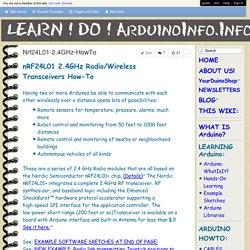 (Details) The Nordic nRF24L01+ integrates a complete 2.4GHz RF transceiver, RF synthesizer, and baseband logic including the Enhanced ShockBurst™ hardware protocol accelerator supporting a high-speed SPI interface for the application controller. The low-power short-range (200 feet or so)Transceiver is available on a board with Arduino interface and built-in Antenna for less than $3! See it here. Long range RF link using NRF24L01+ RF Transceiver. Creating a two way wireless link is fun and exciting. 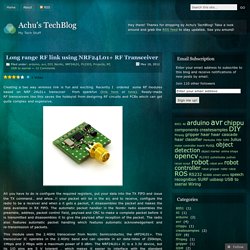 Recently I ordered some RF modules based on NRF 24L01+ transciver from sparkfun (link here or here). Ready-made RF transceivers like this saves the hobbyist from designing RF circuits and PCBs which can get quite complex and expensive. nRF24L01 Product Specification V2.0 - nRF24L01_Product_Specification_v2_0.pdf. Using the nRF24L01 wireless module « insideGadgets. I decided it was time for me to play around with wireless communication as I recently purchased a wireless alarm system. 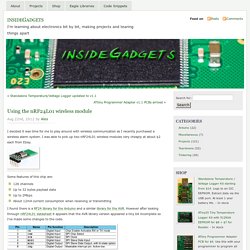