51 New Rules for UNII Bands, Oct 2014 TN. Poster The Anatomy of 802. Wave 2: MU-MIMO and Directional Antennas. This article has lots of pictures. 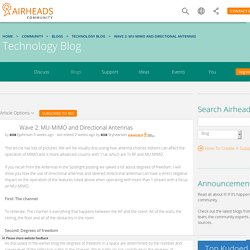 We will be visually discussing how antenna choices indoors can affect the operation of MIMO and it more advanced cousins with 11ac which are Tx BF and MU MIMO. If you recall from the Antennas in the Spotlight posting we talked a lot about degrees of freedom. I will show you how the use of directional antennas and steered directional antennas can have a direct negative impact on the operation of the features listed above when operating with more than 1 stream with a focus on MU-MIMO. First: The channel To reiterate. Second: Degrees of freedom As discussed in the earlier blog the degrees of freedom in a space are determined by the number and power level of the reflection paths in the channel. The number of streams that are well supported in a channel has to be the same or less than the degrees of freedom MU-MIMO further complicates this because not the targets of a transmission can be in three totally different directions. 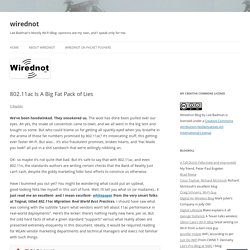 They snookered us. The wool has done been pulled over our eyes. Ah yes, the snake oil convention came to town, and we all went in the big tent and bought us some. But who could blame us for getting all sparkly-eyed when you breathe in the aroma of those fat numbers promised by 802.11ac? It’s intoxicating stuff, this getting-ever-faster Wi-Fi. OK- so maybe it’s not quite that bad. Have I bummed you out yet? (Download here) I won’t give it all away, but here are a few teases: Get the document, read it, and share it.

At the same time, don’t be as pissy as I’m making myself out to be in this blog (I’m a writer, and this is called creative license for those of you watching at home). 11ac is still moving the Wi-Fi cheese deeper into the 5 GHz spectrum, which is a huge gain for the greater wireless good. So maybe 11ac isn’t really a big fat pack of lies… perhaps it’s more like a series of Brian Williams-style “embellishments”. Like this: Like Loading... Wireless On the Go. Transmitting information - There are 3 main steps involved in transmitting a signal over the air: A carrier signal which is generated at the transmitterThe carrier is modulated with the information to be transmitted. 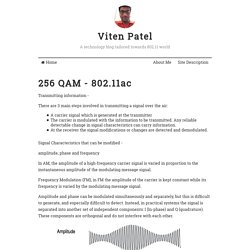 Any reliable detectable change in signal characteristics can carry information.At the receiver the signal modifications or changes are detected and demodulated. Signal Characteristics that can be modified - amplitude, phase and frequency. Deploying 802.11ac won't force a wired network upgrade. The rollout of new 802.11ac Wave 1 and Wave 2 access points is kicking up an old worry among IT managers: Is the bandwidth on the wireless side going to be so great that I need to upgrade my wired network? 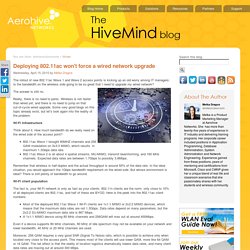 The answer is still no. Really, there is no need to panic. Wireless is not faster than wired yet, and there is no need to jump on that out-of-cycle wired upgrade. Some very good blogs on this topic already exist, but let’s look again into the reality of the problem. Wi-Fi Infrastructure. M.GAST : An introduction to 802.11ac (#1 of 7) Dynamic Frequency Selection Part 3: The Channel Dilemma. DFS requirements for protecting mission-critical systems pose channel complications for enterprises deploying 802.11ac. 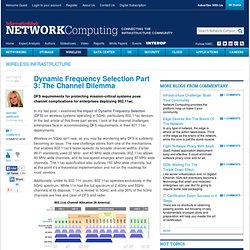 In my last post, I examined the impact of Dynamic Frequency Selection (DFS) on wireless systems operating in 5GHz, particularly 802.11ac devices. In the last article of this three-part series, I look at the channel challenges enterprises face in accommodating DFS requirements in their 801.11ac deployments. Wireless on 5GHz isn’t new, so you may be wondering why DFS is suddenly becoming an issue. 802.11ac: The Fifth Generation of Wi-Fi Technical White Paper  [Cisco Aironet 3600 Series. What you need to know. The newest wireless networking protocol is 802.11ac, due to be ratified sometime in 2013. 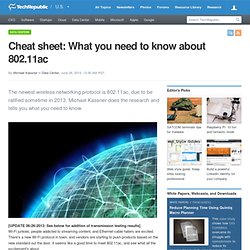 Michael Kassner does the research and tells you what you need to know. [UPDATE 06-26-2013: See below for addition of transmission testing results] Wi-Fi junkies, people addicted to streaming content, and Ethernet-cable haters are excited. There's a new Wi-Fi protocol in town, and vendors are starting to push products based on the new standard out the door. It seems like a good time to meet 802.11ac, and see what all the excitement's about.