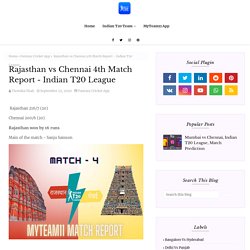 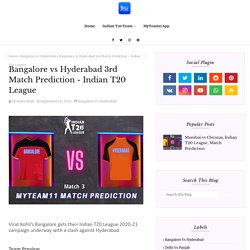 Team Preview Bangalore reached UAE to search the maiden Indian T20 League title and their assignment would be their 2016 final rivals Hyderabad. Bangalore worked on their squad after the last year’s auction and tried to fulfil their weak spots. Delhi vs Punjab, Indian T20 League, Match Prediction. Delhi takes on Punjab in the second match of the Indian T20 League 2020. 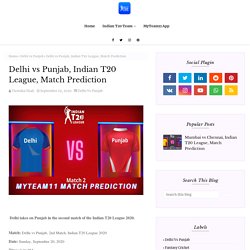 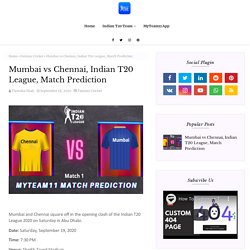 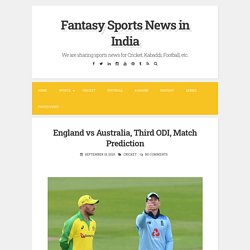 Team Preview England snatched the victory from the jaws of the defeat in the second ODI to level the series 1-1 and took the series into the decider. England are the strongest side at home and they haven’t lost a single bilateral ODI series in the last 4-5 years. After a disappointing batting in the 2nd game, the bowlers saved the series defeat. They made a perfect comeback when Australia were 144/2, in the chase of 232. How to boost your Cricket fantasy score in Indian T20 League. Trinbago Knight Riders vs St Lucia Zouks, CPL Final Match Prediction. Trinbago Knight Riders and St Lucia Zouks face each other in the finale of the Caribbean Premier League 2020 Match Info Match: TKR vs STZ, Final, Caribbean Premier League 2020 Date: Thursday, September 10, 2020. 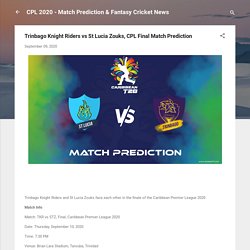 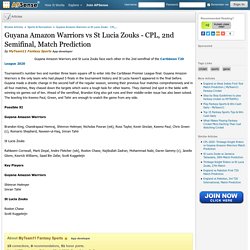 England vs Pakistan, 2nd T20 International, Match Prediction ~ Fantasy Sports News in India. England and Pakistan play each other in the second outing of the 3-matches T20I series at Manchester. 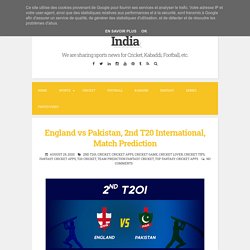 Team Previews - England vs Pakistan Cricket Series 2020 After the washed-out affair on Friday, England and Pakistan meet in the 2nd T20I on Sunday. Both sides would have a big opportunity to take a lead in the series. On Friday’s first T20I, both sides have their own positives. England vs West Indies Test Series 2020 - Match schedule, team news. Download Fantasy cricket app. Mzansi Super League (MSL) 2019 - Team Squads ~ Fantasy Sports News in India. How to play Fantasy Football Leagues and Win Cash Daily? How to Play Fantasy Cricket League on MyTeam11? ~ Fantasy Sports News in India. Fantasy Sports has become a billion-dollar industry nowadays; daily a new fantasy sports platform is coming into the market. 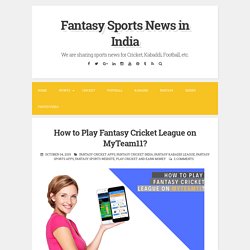 Apps like Dream11, MyTeam11, Fan fight, HalaPlay, My11Circle and many more are allowing user to experience the thrill of Fantasy sports. In India, people blindly follow cricket, so undoubtedly among all the sports fantasy cricket attracts the attention of large number of users. Dream11 and MyTeam11 are the best apps to play fantasy cricket and earn big. No special skill set is required to play Fantasy cricket, you just need to have good knowledge and presence of mind. Now a question arises that how to play fantasy cricket? Stats: India Vs. South Africa Test Series - India Fantasy Cricket. India to Host Sri Lanka T20I Series in 2020 – SportsManiac. As per the recent announcements made by the Board of Control for Cricket in India (BCCI), India is all set to host Sri Lanka for a 3-game T20I series in January 2020. 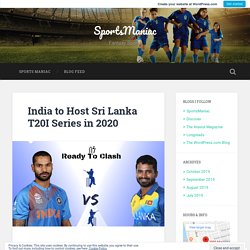 The oldest cricket rivalry, the Ashes is going on, and Australia is leading the series by 2-1 with one game left. Apart from Ben Stokes miracle in the third Ashes Test, England team failed to deliver their best performance in the entire series. Ashes series 2019 was started on August 1 when England and Australia met each other at Edgbaston, Birmingham. Australia emerged victorious in this game by a comprehensive margin of 251 runs to go 1-0 in the five-match series. The second game ended in a draw while England leveled the series after winning the third Test at Headingley, Leeds. EXCLUSIVE: “Parent’s ideology needs to change because E-Sports is the next big thing in India,” says Lokmanyu Chaturvedi.

#JazbaJeetKa Ben Stokes: Player who kept England's hopes alive. WHY IS WRESTLING SO FAMOUS IN INDIA? What Mayank Agarwal needs to be successful in West Indies conditions? Sumit Nagal - Hope of Indian Tennis. Ashes 2019: Ben Stokes miracle at Headingley levels series 1-1. Chris Gayle isn't Done Yet - sports news. Also known as ‘Universal Boss,’ Christopher Henry Gayle has been ruling in International cricket since 1999. In his 20-year stint, Chris Gayle has entertained cricket fans from every nation with his big sixes, dance moves, unique celebrations style, etc. In the recently concluded MyTeam11 West Indies-India One-Day Internationals series, it was assumed that the last One-Day match played at Port of Spain will be his last 50 over game.

In the third One-Day International Jamaican born batsman, who made 72 off 41 balls, was praised by the Indian players as he walked off after being dismissed in the 12th over of innings. He raised his bat, helmet perched on top of it, and the crowd continued to cheer, wondering if it were the last time they would see him bat. 9 July, 3 PM . Create Your Team for Semi-Finale Now! #TeamIndia □□ . #INDvsNZ #SemiFinals #Cricket #CWC19 #WorldCup #MyTeam11 #India.