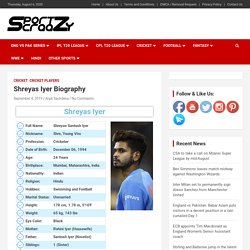 He tallied 809 runs at an average of 50.56 which includes two centuries and six half-centuries. The following season, he ended up as the highest run-getter, scoring 1321 runs which was laced with four centuries and seven half-centuries at an average of 73.39. With that, he also became the second player to have cross 1300-run mark in Ranji Tropy. Shreyas Iyer made his List A debut in November, 2014. Turning up for Mumbai, he scored 273 runs at an average of 54.60 in the 2014 15 Vijay Hazare Trophy. Harbhajan Singh Biography: Age, Height, Net Worth, Achievements, Awards. Domestic Career: Impressive performances in the junior level cricket meant he was soon drafted in Punjab’s under-16 team. 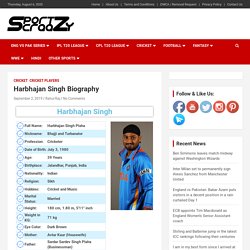 At 15 years of age, he made his debut for the under-16 side against Haryana. Bhaji impressed everyone his art of spin bowling, taking 32 wickets in the tournament. Sachin Tendulkar Biography: Age, Height, Birthday, Net Worth & Awards. Although Sachin has always been quoted as one of the best cricketing personalities both on and off the pitch, he still got his name dragged in some of the most unwanted controversies: 1. 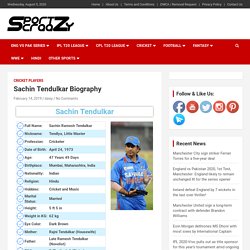 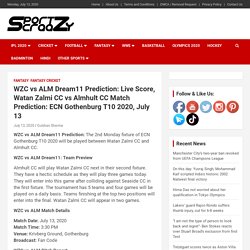 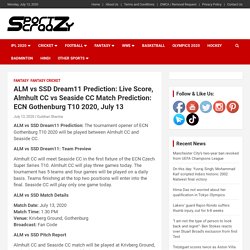 ALM vs SSD Dream11: Team Preview Almhult CC will meet Seaside CC in the first fixture of the ECN Czech Super Series T10. Yasir Shah expecting dry wickets in England for assisting spinners. Pakistan’s spinner Yasir Shah has said that he is hoping that pitches in England turn out to be spinner-friendly in the upcoming series between England vs Pakistan. 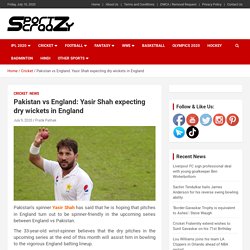 The 33-year-old wrist-spinner believes that the dry pitches in the upcoming series at the end of this month will assist him in bowling to the vigorous England batting lineup. Shah has been closely working with the former Pakistan spinner Mushtaq Ahmed on his bowling variations especially googlies which he hopes to use against England during the test series. “My googly is coming out well. Frank Lampard wants Tammy Abraham to start “scoring regularly” - Chelsea manager Frank Lampard said that he wants Tammy Abraham to start “scoring regularly, urging him to focus more on training. 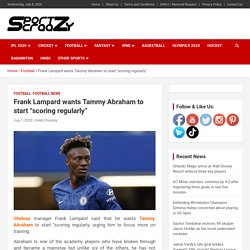 Abraham is one of the academy players who have broken through and became a mainstay but unlike six of the others, he has not signed a new contract in the past year. “I think Tammy’s contract, we are not at a critical level with it,” Lampard said ahead of Chelsea’s Premier League trip to Crystal Palace. “I will leave it with him and the club to discuss that side of it. BWF calls off China Masters and Dutch Open due to COVID-19 pandemic. Badminton World Federation (BWF) has called off two more major badminton international events- China Masters and Dutch Open, which were rescheduled earlier due to Coronavirus pandemic. 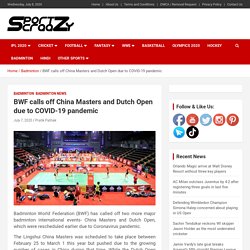 The Lingshui China Masters was scheduled to take place between February 25 to March 1 this year but pushed due to the growing number of cases in China during that time. While the Dutch Open was slated to take place between October 6-11 in the Netherlands. “Two BWF Tour Super 100 tournaments have been cancelled from the revamped BWF Tournament Calendar for the year – the Lingshui China Masters 2020 and YONEX Dutch Open 2020,” the governing body said in a statement. The China Masters was moved to August 25-30 this year but now the event has been finally cancelled this year.

ATP announces revised rankings system for men's tennis. The Association of Tennis Professionals (ATP) has announced a revised system for determining the Men’s Tennis World rankings when the season will resume in August. 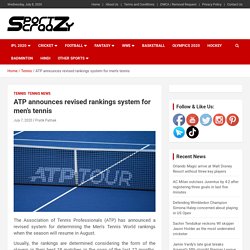 Usually, the rankings are determined considering the form of the players in their best 18 matches in the span of the last 12 months. But the apex body has now pushed the span to 22 months due to the coronavirus pandemic. All the tennis activities were impeded in the mid-March this year, including the cancellation of Wimbledon in July while French Open (Rolland Garros) been pushed to September this year. "Everyone’s focus is on the Olympics" - Graham Reid - Indian men’s Hockey team coach, Graham Reid recently talked about the roadmap of Indian hockey and the next big event for which they have started doing preparations under closed doors. 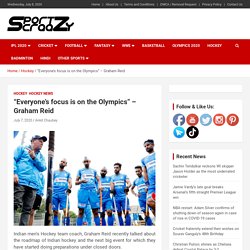 “If you ask a player today what they want to do or are looking forward to, they will say it’s the Olympics,” said Indian’s men’s hockey team coach Graham Reid. In an interview with Sportstar, Indian men’s hockey team coach Graham Reid stated that it was crucial to help players overcome the mental challenges of being away from their family during the lockdown period. Several questions were asked to him which includes how are the players focussing on the next big event Olympics 2021 with all coronavirus distractions.

Barcelona obligated in renewing Messi's contract- Club President. Just a few days ago Barcelona great Lionel Messi had hinted of not renewing his contract with the club for the next season as his contract is going to expire in 2021. And now Barcelona’s president Josep Maria Bartomeu has said it is his obligation to get Messi to sign the new contract with the club next year. A report by the Spanish radio last week suggested that the 33-year-old forward is now rethinking his association with the club and wishes to continue his stint at the Camp Nou in the future. There had been numerous incidents that suggested Messi’s disagreements with the club since the last year because he was portrayed as the one responsible for the chaotic things happening inside the club.

One such incident includes sacking of the coach Ernesto Valverde to which Messi openly blasted Club’s sporting director Eric Abidal. Roger Federer talks about his Tennis future - Tennis great Roger Federer, on Monday, said he is missing Wimbledon but hopes to play the tournament in 2021. The 38-year-old who has undergone two knee surgeries this year and had already announced that he will not play until next year. “Personally, it has been very pleasant to stay in the same place for a long time, I hadn’t experienced that for more than 25 years,” Federer said at the launch of the “Roger Center Court” running shoes created by Swiss brand On.

England vs West Indies: Brian Lara says visitors must try and win in four days. England vs West Indies: Former West Indies player and legendary batsman Brian Lara has said that the visitors must try and win the Test matches within four days because they would barely last for five days against the firm England team. Lara said this because he believes that dragging the game until the last day wouldn’t yield a positive result for the visitors and so Jason Holder‘s men will need to be miraculous in the starting two days of the match. The first match of the series will take place between July 8-12 at the Ageas Bowl, Southampton, marking the return of international cricket in England after over three months. The visitors do have a strong pace attack consisting of Shannon Gabriel, Kemar Roach, Alzarri Joseph and skipper Jason Holder but the home team also has a tough bowling attack, consisting of Stuart Broad, James Anderson, Jofra Archer etc.

“England are not beaten very easily at home and are overwhelming favourites. Kohli, Shastri extend wishes to MS Dhoni as he turns a year older - Bradley Beal will travel to Orlando with Washington Wizards, unsure of playing. Washington Wizards’ guard Bradley Beal has said that he will travel with the team to Orlando, Florida for the NBA restart at the end of this month but he is still not sure if he would play or not. Dwight Howard set to join Lakers in NBA restart, also pledges to donate salary to charity. Jose Mourinho completes 200 wins as Tottenham beat Everton. Dwayne Bravo releases 'Helicopter 7' song on MS Dhoni's 39th Birthday.

Former West Indies player and Chennai Super Kings‘ star all-rounder Dwayne Bravo released a song named ‘Helicopter-7’, a few hours before the birthday of the former Indian skipper MS Dhoni. The song has been dedicated exclusively to the ‘Captain Cool’ on his 39th birthday. The CSK all-rounder gave an early gift to Dhoni on the eve of his birthday by releasing a song on his official Youtube channel but before that, he uploaded the trailer of the song on his Instagram account giving a glimpse of India’s greatest skipper’s journey so far.

Manchester City defeats Liverpool by 4:0 in Premier League. Real Madrid launch first women’s team in 118-year history - How the cancellation of IPL 2020 would affect businesses associated with the tournament? - Sri Lanka Cricket hopeful of going ahead with T20 League in August. The Decision Regarding Chinese Sponsors in IPL Will be in The Best Interest of Cricket, Country: BCCI - Cricket South Africa announces new dates for Solidarity Cup. NBA season restart in Florida unpredictable- Adam Silver. Ravindra Jadeja named India's most valuable All-rounder of 21st century. Serie A: Juventus secure commanding 3-1 victory over Genoa. Lionel Messi reaches 700-goal mark in his career for Barcelona and Argentina combined. Boris Becker tells Nick Kyrgios to 'man up and deliver' after Australian calls him 'doughnut' Liverpool Joel defender Joel Matip to miss remaining season due to foot injury. MS Dhoni was not DRS fan while Kohli quite the opposite one: Aakash Chopra.

BCCI slams ICC's leadership for taking the crucial decisions untimely. WWE Releases Special Music Video to Pay Hearfelt Tribute to The Undertaker - "It comes as a surprise", Heinrich Klaasen reacts to being nominated for ODI cricketer of the year - PCB announces 20-member sqaud for the England tour. "CSK dressing room has a lot of thinking cricketers"- Faf du Plessis. 'No one is given the IPL contract because he is the son of someone’s friend'- Aakash Chopra. "Love The Bra Look Boys, We Normally Wear it Under The Top"- Lisa Sthalekar Takes a Jibe at Mitchell Starc - Odisha FC parts ways with the assistant coach Thangboi Singto. Pakistan Cricket Board Admits Revenue Shortfall During Pandemic Time -