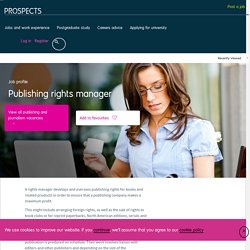 This might include arranging foreign rights, as well as the sale of rights to book clubs or for reprint paperbacks, North American editions, serials and extracts, audio and electronic formats, and translations. Rights managers coordinate the whole process, from initiating the sale of a publication to new contacts, through to ensuring that the particular publication is produced on schedule. Their work involves liaison with editors and other publishers and depending on the size of the organisation may either cover the publishing rights for a specific section, or the whole, of the business. 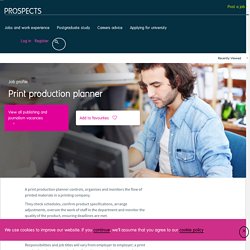 They check schedules, confirm product specifications, arrange adjustments, oversee the work of staff in the department and monitor the quality of the product, ensuring deadlines are met. Print production planners liaise with other production departments and customer account managers at local, national and international levels according to the scale of the work in hand. Responsibilities and job titles will vary from employer to employer; a print production planner may also be referred to as a print manager, print supervisor, production press operations manager or production planning co-coordinator. 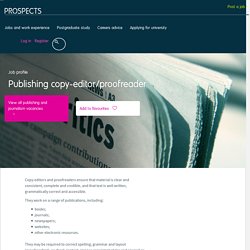 They work on a range of publications, including: books;journals;newspapers;websites;other electronic resources. They may be required to correct spelling, grammar and layout (proofreading), or check content, impose consistent styles and reword or rewrite (copy-editing). This depends on the project, the employer or the client and their own specialist experience. Many copy-editors/proofreaders perform both functions in tandem. They're employed by publishers, businesses and public bodies but increasingly on a freelance basis, so it's common for them to have several clients at the same time. Responsibilities. BSkyB Careers. INFORMATION, JOBS & TIPS FOR GRADUATES IN THE BROADCAST SECTOR. Runner, broadcasting/film/video job profile. Fierce competition for entry-level positions means work experience is vital so you need to make speculative applications, network and be persistent A runner is an entry-level position, the most junior role in the production department of a broadcast, film or video company. 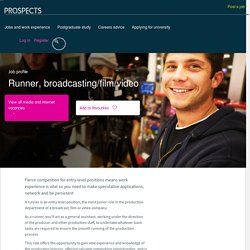 As a runner, you'll act as a general assistant, working under the direction of the producer and other production staff, to undertake whatever basic tasks are required to ensure the smooth running of the production process. This role offers the opportunity to gain vital experience and knowledge of the production process, offering valuable networking opportunities, and is often seen as the first step on the ladder for people aspiring to roles in broadcasting media. Responsibilities. Sound technician, broadcasting/film/video job profile. 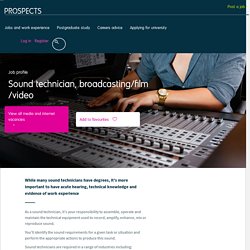 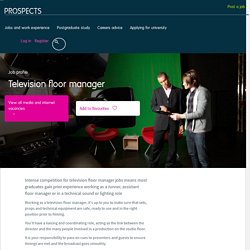 You'll have a liaising and coordinating role, acting as the link between the director and the many people involved in a production on the studio floor. It is your responsibility to pass on cues to presenters and guests to ensure timings are met and the broadcast goes smoothly. You'll make sure that events go according to a set plan and that people taking part know their particular roles and how it fits in with whatever else is happening. The work is mainly studio-based, but may also include outside broadcasts, depending on the production. 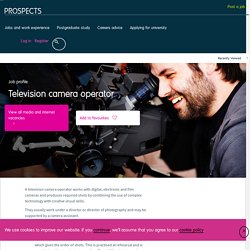 They usually work under a director or director of photography and may be supported by a camera assistant. A camera operator may specialise in working in any or all of the following areas: Studio - where the camera operator usually follows a camera script, which gives the order of shots. This is practised at rehearsal and is cued by the director during recording. The skill lies in interpreting what the director wants and acting quickly and effectively to achieve it;Outside broadcast (OB) - working as part of a team of camera operators filming live events, such as sporting and ceremonial occasions and music performances;On location - where there is likely to be more opportunity for creativity through suggesting shots to the director.

Responsibilities Generally tasks can include: Salary Working hours. Film, TV & Commercials Production Companies and Services Directory. Film/video editor job profile. Freelance work and using your creative and digital technology skills are key aspects of a career in film and video editing As a film or video editor, you'll be responsible for assembling recorded raw material into a finished product that's suitable for broadcasting. 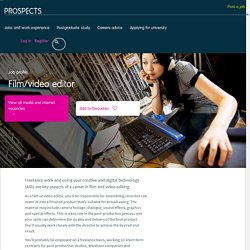 The material may include camera footage, dialogue, sound effects, graphics and special effects. This is a key role in the post-production process and your skills can determine the quality and delivery of the final product. You'll usually work closely with the director to achieve the desired end result. Writers' Guild of Great Britain. Writer job profile. For a successful career as a writer you will need to be creative, organised and disciplined and possess excellent research skills along with a passion for the written word As a writer, you will be involved in the creation and development of works of fiction and non-fiction. 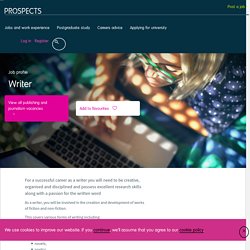 This covers various forms of writing including: life writing;magazine and newspaper articles;non-fiction;novels;poetry;screen and radio;scripts for theatre;short stories;web content. New media is also opening doors for writers in areas such as mobile phone content and computer game scripts. Most writers work freelance and are self-employed. Some writers may find avenues to diversify their writing and write in different forms, such as published novelists also writing reviews and literary criticism. In addition many writers manage their writing work alongside full or part-time jobs, which may be related to their writing (such as lecturing on creative writing courses) or entirely unrelated.

Responsibilities Salary Working hours. Jobs4Journalists – Press Gazette. Magazine journalist job profile. If you're a creative type who loves to research, interview and write, then a career in magazine journalism might be for you Magazine journalists research and write news articles and features for a variety of publications, usually periodicals, including: consumer titles which cover both general interest and specialist areas;customer magazines from shops, supermarkets, etc;trade publications, also known as business-to-business (B2B) magazines. 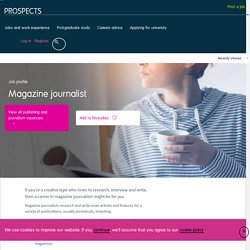 These titles will usually be printed, but many magazines are also produced for the web. Knowledge of the concise writing style needed for the internet and search engine optimisation are very useful skills. Newspaper journalist job profile. Newspaper journalists research and write stories for national, regional and local press. They report on news and politics, as well as on sports, arts and culture, science and business. They also cover national and local events, entertainment and human interest stories. Junior reporters usually write up stories allocated to them by the news desk.

They pass these to the news editor, who in turn hands them to sub-editors. ITV Jobs. News, jobs and resources for UK journalists. Jobs and careers with BBC. PA - powering storytelling on any platform. Broadcast journalist job profile. As a broadcast journalist, your role is rooted in communication, finding stories and making them known to the public in a fast but coherent way Broadcast journalists research, investigate and present news and current affairs content for television, radio and the internet.

Their aim is to present information in a balanced, accurate and interesting way through news bulletins, documentaries and other factual programmes. Broadcast journalists can occupy a number of roles within the media including: editorreporterpresenter/news anchorproducercorrespondent. Responsibilities. The Bookseller Careers & Jobs. Editorial assistant job profile. If you possess excellent grammar and communication skills and a keen interest in publishing a position as an editorial assistant could be for you An editorial assistant provides support in all stages of the publication of: books;journals;magazines;online material;publicity materials.

In this role you will support senior editorial staff in all aspects of the administration, commissioning, planning and producing of different publications. You will need a great eye for detail, the ability to spot mistakes and excellent time management skills, so that you always hit strict deadlines. The tasks that you undertake and your level of responsibility will vary depending on the size of the organisation and the type of publication that you are working on.

An editorial assistant role is typically an entry-level job for careers in the editorial industry. Responsibilities Editorial assistants perform a range of administrative and editorial tasks necessary to the production of publications. Salary. Broadcast presenter job profile. A broadcast presenter is the public face, or voice, of programmes broadcast on television, radio and the internet. They work on a variety of platforms including: national, regional, satellite and cable television;local and national radio;online. Their role is always to entertain and inform their audiences by presenting information or entertainment in an accessible and attractive way. Championing Great British Audio. Publishing Careers. The Network - jobs in TV. Home - MediaNationMediaNation. Visit Campaign's website for brands, ad agencies & to watch ads.