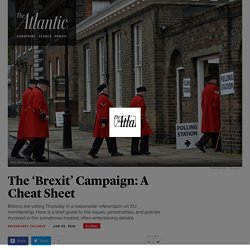 ET The British are voting Thursday in a historic referendum on EU membership, a vote that could have implications not only for the U.K. but for the entire 28-member bloc that represents Europe’s most ambitious post-World War II experiment as well as one of the world’s largest economies. Initial figures from the country’s Electoral Commission said 46,499,537 people had registered—a record in Britain for what is only its third referendum ever. Polls opened at 7 a.m. local time (3 a.m. Brexit vote drives firms to ditch £65bn of investment.

British businesses have abandoned investment plans worth more than £65 billion since the vote to leave the European Union five months ago. 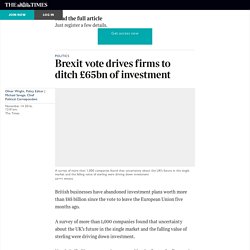 A survey of more than 1,000 companies found that uncertainty about the UK’s future in the single market and the falling value of sterling were driving down investment. Nearly half of large companies surveyed by the Centre for Economic and Business Research had cancelled investment plans since July, with medium-sized businesses most sensitive to the outcome of the referendum. More than one in five cited uncertainty over the UK’s membership of the single market for delaying investment. A similar number cited the falling pound. A separate report into the outlook for the labour market found that wages were likely to fall in real… Buying a pass to enter Europe ‘would help combat terrorism’ Britons would have to pay a fee to visit Europe after Brexit under plans for an EU version of the US visa waiver to be announced this week. 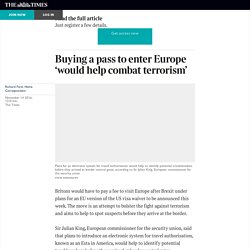 The move is an attempt to bolster the fight against terrorism and aims to help to spot suspects before they arrive at the border. Sir Julian King, European commissioner for the security union, said that plans to introduce an electronic system for travel authorisation, known as an Esta in America, would help to identify potential troublemakers before they arrived at border control gates. The US scheme requires international travellers who are exempt from visa requirements to apply for an Esta and pay about £10 before entering the territory. US result may help May’s cause in Brexit talks. Donald Trump and Brexit have proven the centre ground is dead – and the 2008 recession killed it. Insisting that he could defy the odds and win, Donald Trump promised his supporters “Brexit plus, plus, plus”. 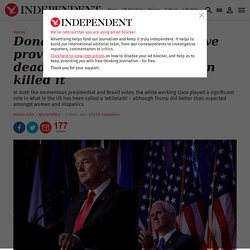 Surely, many of us thought, such a seismic shock could not happen twice in five months? Now it has, and we should have seen it coming. There are many parallels. On both sides of the Atlantic, we are witnessing a delayed reaction to the 2008 financial crisis. Explicit cookie consent. “BREXIT-plus-plus-plus” was how Donald Trump—who also called himself “Mr Brexit”—termed his pitch to voters during his successful presidential campaign. 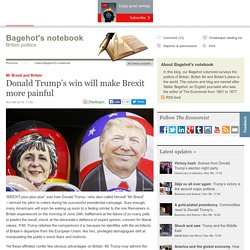 Sure enough, many Americans will soon be waking up soon to a feeling similar to the one Remainers in Britain experienced on the morning of June 24th: bafflement at the failure of so many polls to predict the result, shock at the electorate’s defiance of expert opinion, concern for liberal values. If Mr Trump relishes the comparisons it is because he identifies with the architects of Britain’s departure from the European Union: like him, privileged demagogues deft at manipulating the public’s worst fears and instincts.

The Visual Propaganda of the Brexit Leave Campaign. MANCHESTER, UK — In the week following the United Kingdom voted to leave the European Union (the “Brexit”) on June 23, there was a 500% rise in hate crimes across the country. 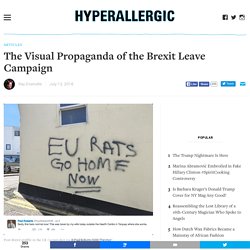 Examples, such as racist materials sent in the mail, barked epithets on the street, and demands directed at foreigners and non-white citizens to leave the country, have been collected on social media under the hashtag #PostRefRacism. How did the Brexit referendum — a vote about the UK’s status in the European Union — become the catalyst for abuse against Polish nurses and British citizens of Pakistani background? Social media can’t tell us much about this: Twitter’s conversation analysis post-Brexit indicated that the economy was by far the most discussed topic for the referendum.

Rush Brexit through parliament, May is urged. Ministers are considering plans to fast-track parliamentary approval for Brexit if the Supreme Court insists that MPs must vote to trigger formal talks to leave the EU. 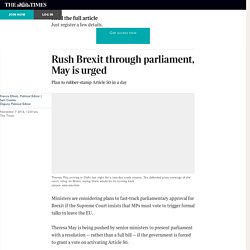 Theresa May is being pushed by senior ministers to present parliament with a resolution — rather than a full bill — if the government is forced to grant a vote on activating Article 50. Such a step could allow the Commons and Lords to rubber-stamp the start of the Brexit process in a single day, but risks angering Remain MPs who want close scrutiny of the government’s negotiating position. The prime minister raised the stakes yesterday in the confrontation with the judiciary, defending press coverage of the High Court ruling last week that the government could not act…

Introducing 'Brexit and Chill', the confusingly pro-Remain campaign aimed at young people. Full-text electronic journals, databases and print journals. Birmingham City University - Sign In. Content Marketing And The EU Referendum - M2 Bespoke Blog. So there we have it. 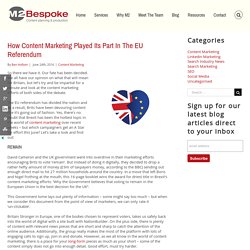 Our fate has been decided. We all have our opinion on what that will mean for Britain, but let’s try and be impartial for a minute and look at the content marketing efforts of both sides of the debate. The EU referendum has divided the nation and as a result, Brits have been devouring content like it’s going out of fashion. 7 Marketing Lessons From The Brexit Campaigns. The UK’s EU referendum result surprised many people outside the UK. 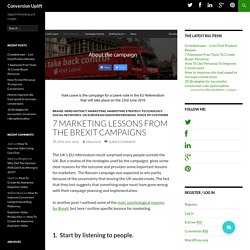 But a review of the strategies used by the campaigns gives some clear reasons for the outcome and provides some important lessons for marketers. The Remain campaign was expected to win partly because of the uncertainty that leaving the UK would create. The fact that they lost suggests that something major must have gone wrong with their campaign planning and implementation. Branding Brexit: the comms strategy failures around the EU referendum – AUK.

By Sammy Mansourpour, Managing Director, AgencyUK Nine minutes before Boris Johnson publicly declared which side he was backing in Britain’s referendum on membership of the European Union, he texted David Cameron to let him know – “Dave, I’m backing Brexit. 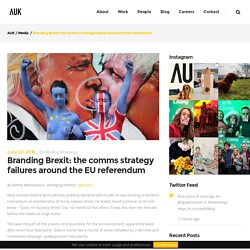 Soz.” Or words to that effect. It was less than ten minutes before the media-at-large knew. This was the part of the process of preparation for the announcement, apparently taken after ‘enormous heartache’. Why Brexit is good for the fashion industry. On the eve of the EU referendum in June during London Collections Men it wasn’t hard to gauge which direction the fashion pack was leaning.

Unsurprisingly, thanks to factors such as the EU support of many of the initiatives of the British Fashion Council (BFF) and the fact that myriad young designers work with factories and suppliers from Lithuania to Lisbon, the community is an outward-looking and inclusive bunch. Indeed, during the campaign the BFC reported that of the near-500 designers it polled, 90 per cent planned to vote for Remain. Now the world has changed and in the face of a probable Brexit, whatever individual’s feelings may be the UK fashion industry has to start accentuating the positive. Why the government believes that voting to remain in the european union is the best decision for the uk. 90 per cent of British fashion designers oppose Brexit.

EU referendum: A survey carried out by the British Fashion Council has revealed that 90 per cent of British fashion designers say they will vote to remain in the European Union. Out of the 290 respondents to the online survey, 90 per cent voted remain, 4.3 per cent voted to leave, 2.4 per cent were undecided and 2.8 per cent said they would not be voting in the referendum on 23 June.

Designers weighed in on the debate during last week's fashion showcase London Collections Men (LCM), where Christopher Raeburn presented pieces emblazoned with the word 'In', and Cozette McCreery and Sid Bryan of Sibling showed support by taking their final bow wearing 'In' T-shirts. "For a host of reasons including staffing, manufacturing and exporting, we're very much in," Raeburn told Dezeen. McCreery had additional safety concerns should Britain vote to leave. Architects and designers oppose Brexit with an open letter. EU referendum: David Chipperfield, Ron Arad, Richard Rogers, David Adjaye and Thomas Heatherwick are among the architects and designers that have signed a letter backing the Remain campaign for the UK's EU referendum. The letter says that Britain's "global creative success would be severely weakened" if it was to leave the EU. David Chipperfield, Amanda Levete, Richard Rogers and David Adjaye are among the architects to have signed, declaring their opposition to Britain's potential exit – or Brexit – from the European Union.

I had a profoundly sad moment the evening before last when, leaving Tate Modern, I looked at the building and after sunset walked over the Millennium Bridge. Both were opened in 2000, both symbols of a new openness. An Analysis of Political Marketing by Avraham Shama. 564105c808aebaaea1f6d294. What would Brexit mean for marketers? Britain’s marketers, just like the country at large, are under pressure to decide how they will vote in the referendum on the UK’s membership of the EU on 23 June. A survey of 278 British senior marketers, conducted by email provider Mailjet in March, found that 31% believe leaving the EU – a process commonly referred to as Brexit – would be good for their business. Meanwhile, 42% say Brexit would not be advantageous for their company, and 27% are unsure. The outcome of the vote could have far-reaching consequences for how marketers perform their jobs and engage with the wider world.

Nationwide polls are likely to fluctuate over the next seven weeks but it is clear that the uncertainty created by the referendum is having an effect on businesses. READ MORE: Consumer confidence stalls as Brexit concerns ‘hit home’ Have I Got News For You. Wolfgang Tillmans designs posters opposing Brexit vote. EU referendum: PM 'makes no apology' for £9m EU leaflets.

If the EU thinks it can stop more breakaways by making threats, it really is doomed. Theresa May should be smart over immigration and take students out of the official figures. Brexit could pull the pin out of the EU grenade. That's why the Eurocrats are terrified. Letters: Britain doesn’t need to waste time with the EU’s inept negotiators. Four reasons why banks won't leave the City of London after Brexit. Sweden holds out olive branch to Brexit Britain. Luxury For Less: Tourists Are Winners in Pound's Drop. ‪‪EU referendum‬‬ - Google Trends. Our post Brexit devaluation creates an opportunity. Let’s not squander it this time. Was Brexit fear a giant hoax or is this the calm before the next storm? The sky has not fallen after Brexit but we face years of hard labour. UK economy to grow even faster this year than was forecast before the Brexit vote. Rising gilt yields and a weaker pound are not down to Brexit alone  EU exporters have more to lose than the UK from tariffs after Brexit.

Inflation: next year's ticking time bomb. Theresa May 'optimistic' she can get right Brexit deal for UK. Burberry revenues boosted by weaker pound. Brexit’s impact on British fashion » Promostyl Blog. What Brexit Means for the Fashion Industry. Made in Ethiopia: Fashion's Next Sourcing Hub? Brexit is a disaster for British fashion. LSN : Opinion : Brexit: 360 Vision.

Brexit: All you need to know about the UK leaving the EU. What is Brexit? - dummies. EU referendum pros and cons: Should Britain vote to leave Europe? Countries in the EU and EEA. Rush Brexit through parliament, May is urged.