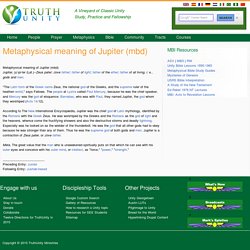 --Zeus pater; Jove father; father of light; father of the ether; father of all living, i. e., gods and men. "The Latin form of the Greek name Zeus, the national god of the Greeks, and the supreme ruler of the heathen world," says Fallows. The people at Lystra called Paul Mercury, because he was the chief speaker, and Mercury was the god of eloquence; Barnabas, who was with Paul, they named Jupiter, the god whom they worshiped (Acts 14:12).

The Nine Tests of Scorpio: Becoming a Spiritual Warrior Daykeeper Journal - Astrology, Consciousness and Transformation Daykeeper Journal. The Solar Eclipse on November 3, 2013 in Scorpio occurs right at the midpoint of Saturn’s Journey through Scorpio which began on October 5, 2012 and will complete on December 24, 2014. 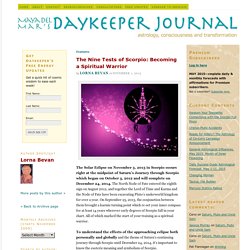 The North Node of Fate entered the eighth sign on August 2012, and together the Lord of Time and Karma and the Node of Fate have been excavating Pluto’s underworld kingdom for over a year. On September 25, 2013, the conjunction between them brought a karmic turning point which re-set your inner compass for at least 14 years wherever early degrees of Scorpio fall in your chart. Ancient Egyptian Gods: Bast (Bastet) Bast (known as "Bastet" in later times to emphasise that the "t" was to be pronounced) was one of the most popular goddesses of ancient Egypt. 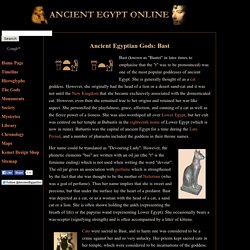 She is generally thought of as a cat goddess. However, she originally had the head of a lion or a desert sand-cat and it was not until the New Kingdom that she became exclusively associated with the domesticated cat. However, even then she remained true to her origins and retained her war-like aspect. Aaru. This article is about reed fields. 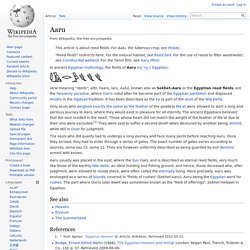 For Aalu, the tuberous crop, see Potato. In ancient Egyptian mythology, the fields of Aaru (/ɑːˈruː/; Egyptian: Only souls who weighed exactly the same as the feather of the goddess Ma'at were allowed to start a long and perilous journey to Aaru, where they would exist in pleasure for all eternity. Symbolism. Essays by Ekowa Symbolism, Oaths and African Heritage I had a critical awakening when I realized that the Judeo-Christian religious concept did not grow up in a vacuum. 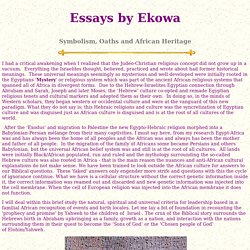 Everything the Israelites thought, believed, practiced and wrote about had former historical meanings. These universal meanings seemingly so mysterious and well developed were initially rooted in the Egyptians 'Mystery' or religious system which was part of the ancient African religious systems that spanned all of in divergent forms. Due to the Hebrew-Israelites Egyptian connection through Abraham and Sarah, Joseph and later Moses, the ‘Hebrew’ culture co-opted and remade Egyptian religious tenets and cultural markers and adopted them as their own. After the ‘Exodus’ and migration to the new Egypto-Hebraic religion morphed into a Babylonian-Persian mélange from their many captivities. Kemetology: African/Kemetic Godesses. Ala - Earth Mother Goddess of the Ibo tribe in Nigeria. 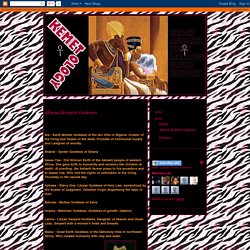 Creator of the living and Queen of the dead. Provider of communal loyalty and Lawgiver of society. Anansi - Spider Goddess of Ghana Asase Yaa - Old Woman Earth of the Ashanti people of western Africa. BUBASTIS, CITY OF CAT GODDESS BAST. Bubastis, a city that had flourished for more than 4,000 years, is today nothing more than piles of scattered red granite blocks and a few empty graves and tombs overgrown by grass. 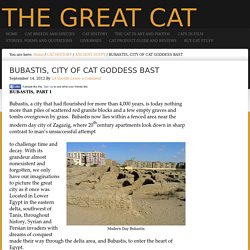 Bubastis now lies within a fenced area near the modern day city of Zagazig, where 20thcentury apartments look down in sharp contrast to man’s unsuccessful attempt Modern Day Bubastis to challenge time and decay. With its grandeur almost nonexistent and forgotten, we only have our imaginations to picture the great city as it once was. Bronze figure of a seated cat. BSL | العربية From Saqqara, EgyptLate Period, after 600 BC The sacred representation of the goddess Bastet The domesticated cat is probably associated more with ancient Egypt than any other culture in the world. 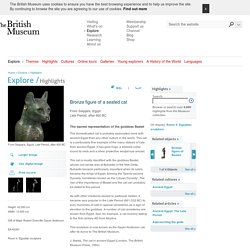 This cat is a particularly fine example of the many statues of cats from ancient Egypt. It has gold rings, a silvered collar round its neck and a silver protective wedjat eye amulet. Qasr Libya Museum: This tile says that the mosaic work was laid in the third year of an indiction by bishop Makarios in 539 AD. 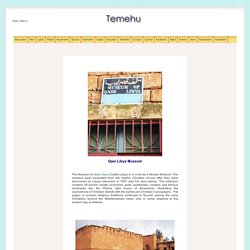 An indiction is a 15-year cycle, used to date documents, with each year being numbered as follows: first indiction, second indiction, third indiction, and so on. Temehu Berber Tribe of Libya & Egypt, also known as the C-Group of Nubia. Scene from the tomb of Seti I, Dynasty XIX. 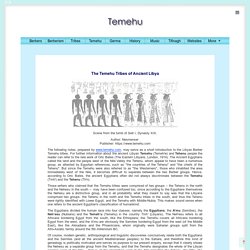 Author: Nesmenser Publisher: The following notes, prepared by www.temehu.com, may serve as a short introduction to the Libyan Berber Temehu tribes. Venus Comes to Earth: The Magic of The Beltane. The magic month of May, is a magic I never really knew until this May, when I came to truly understand what union meant in an entirely new way –because this May, I lived it, and I continue to live it now, as my fingers tap out the words to express the boundless love that flows from my heart onto the page. Michael Jackson and Twin Flame Soul Present the Full Complex Meaning of Archangel Michael´s Sword © Twin Flame Soul Powers.

Dear Readers This is a very special Article, a rare type of Article with the rare information we do not share so much, but that people are very curious about. There is a lot of important symbolism and hints in Michael Jackson´s public works, and as you see above, also in his private Paintings and more. Let us jump right into it! We have made an article on this topic prior already, and applied it in action within the channeled Music Releases since 2010- but this is a special addition. Slowly but surely lifting the VEIL OF ILLUSION, as in this one important Key Image from Michael´s personal visions and private Neverland Paintings collections, commissioned by him directly. Nut, Sky Goddess, Mother of the Gods, A Feature Tour Egypt Story. To the ancient Egyptians Nut (Nuit) was the personification of the sky (originally she was a goddess of just the sky at day, where the clouds formed) and the heavens.

She was believed to be the daughter of the gods Shu and Tefnut, the granddaughter of the sun god Ra. Her husband was also her brother, Geb. Egypt and 2012: What did the ancient Egyptians tell us about this great time of transformation? When I met him, the first question I asked of world renowned Egyptian indigenous wisdom keeper, Abd’el Hakim Awyan (1928 – 2008), who later became my father in law, was: “What do you think of all the hype about 2012? His answer brought a smile to my face. “2012” he said, “Means nothing!” However—when questioned further, he replied that it was a popular marker to describe the shifting life cycles of our planet, and more… He said that we would experience a “great awakening” that he insisted was a natural process that had already begun. Several cycles are beginning and ending all at the same time---like an odometer resetting itself. African Queens and Warrior Women. African Warrior Women According to Greek accounts, the earliest Amazons came from Libya (then a name for most of North Africa).

They wore red leather and carried crescent-shaped shields. Queens & Women Warriors of Africa. African women of antiquity were legendary for their beauty and power. 5 Most Powerful African Queens From History. Women may be considered as the weaker gender in Africa, but our wealthy history records strong women who rose to power to great heights than most male leaders who could only dream of it. Decoding Illuminati Symbolism: Triangles, Pyramids and the Sun - IlluminatiWatcher. Check out the video about this post from the IlluminatiWatcher YouTube channel: Psychiatrist Carl Jung once said about symbols that their purpose was to “give a meaning to the life of man.”

Greeks in India Before Alexander. Greece and India Before Alexander In his speech at a banquet hosted in his honor by Greece President Karolos Papoulias and in his address at the Hellenic Foundation for European and Foreign Policy, on 26 April 2007, the President of the Indian Republic. Shri A. The Greek Dark Ages and Alexander the Great. Minoan-4 Greece. Hellenic vs Hellenistic civilization. Differences between Hellenistic and Hellenic Greek Civilization. His101cd. "'We Have Always Fought': Challenging the 'Women, Cattle and Slaves' Narrative" by Kameron Hurley - A Dribble of Ink.

I’m going to tell you a story about llamas. It will be like every other story you’ve ever heard about llamas: how they are covered in fine scales; how they eat their young if not raised properly; and how, at the end of their lives, they hurl themselves – lemming-like- over cliffs to drown in the surging sea. DYNAMIC AFRICA — Batammaliba (West Africa, primarily Togo & Benin)...

Meanings and Symbolism. Tumblr girl culture. Chapter 40. The Nature of Osiris. § 1. Osiris a Corn-god. Frazer, Sir James George. 1922. The Golden Bough. An Overview of the Symbolic and Artistic Implications Surrounding the Face on Mars - 3. Bolivia and the Sumerian Connection. ONCE UPON A TIME IN AFRIKA. House of Quimbanda. The Ivory Tablets of the Crow Forces Scholars To Take A Second look at the History of Sumeria. Papers in the Attic. Black Theology, Slavery, and Contemporary Christianity. Rediscover Ancient Egypt - The Ancient Egyptian/Christian Holy Families. The COSMIC Spirit: COSMIC MELANIN, THE DARK MATTER PARADIGM: The Archetypal Ordered Synchronicities of the Numbers 4, 13, 44, 8, 16 and 17 - President Obama and the Rise of the El'MUURians, the Ka'Ma'ats, the Moors, Blackness, the Matrix Construct, the Pr. Joseph Campbell Foundation.                        Ptah Originals...  From Prophecy To Reality - Home. Phoenix Symbol *** Surrender to Love: Interview with artist Tanya Torres - Part 1.

Fellowship of Isis Homepage Archive. Mary Called Magdalene. Spoke 8 - Symbolic Meaning of the Number Eight. The Glossary of the Gods A Guide to the Sacred Neteru of Ancient Egypt.