Exxon%20Future%20of%20Oil%20and%20Gas. Awarded an engineering contract for PETRONAS’ RAPID project in Malaysia. Technip has been awarded a front-end engineering design (FEED) contract by PETRONAS for its proposed Refinery and Petrochemical Integrated Development (RAPID) project located in the state of Johor, Malaysia. 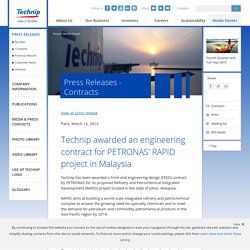 RAPID aims at building a world-scale integrated refinery and petrochemical complex to answer the growing need for specialty chemicals and to meet the demand for petroleum and commodity petrochemical products in the Asia Pacific region by 2016. The proposed refinery will have a capacity of 300,000 barrels per standard day and will supply naphtha and liquid petroleum gas feedstock for the RAPID petrochemical complex, as well as produce gasoline and diesel that meet European specifications. The petrochemical units, on the other hand, will enhance the value of the olefinic streams coming from the RAPID steam cracker by producing various merchant grades petrochemicals products such as polyethylene, polypropylene, synthetic rubbers and other petrochemicals products. 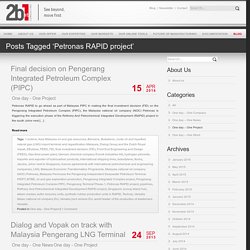 PETRONAS. ​PETRONAS is pleased to inform that its proposed Refinery and Petrochemical Integrated Development (RAPID) project, to be located in Pengerang, Johor, is progressing as scheduled. 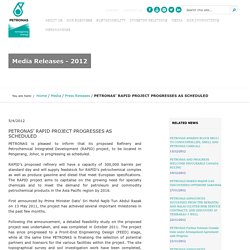 RAPID’s proposed refinery will have a capacity of 300,000 barrels per standard day and will supply feedstock for RAPID’s petrochemical complex as well as produce gasoline and diesel that meet European specifications. The RAPID project aims to capitalise on the growing need for specialty chemicals and to meet the demand for petroleum and commodity petrochemical products in the Asia Pacific region by 2016. First announced by Prime Minister Dato’ Sri Mohd Najib Tun Abdul Razak on 13 May 2011, the project has achieved several important milestones in the past few months.

Following the announcement, a detailed feasibility study on the proposed project was undertaken, and was completed in October 2011. Except for pre-FID works, no other contract has been tendered out or awarded. Issued by Media Relations Department. 7A. How Oil Refining Works" The oil refining process starts with a fractional distillation column. 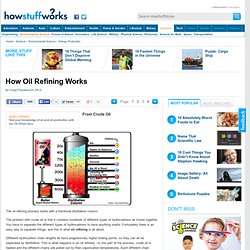 The problem with crude oil is that it contains hundreds of different types of hydrocarbons all mixed together. You have to separate the different types of hydrocarbons to have anything useful. Fortunately there is an easy way to separate things, and this is what oil refining is all about. Different hydrocarbon chain lengths all have progressively higher boiling points, so they can all be separated by distillation. This is what happens in an oil refinery - in one part of the process, crude oil is heated and the different chains are pulled out by their vaporization temperatures. To understand the diversity contained in crude oil, and to understand why refining crude oil is so important in our society, look through the following list of products that come from crude oil: Petroleum gas - used for heating, cooking, making plastics Naphtha or Ligroin - intermediate that will be further processed to make gasoline. 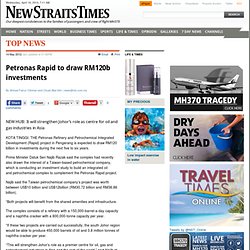 Prime Minister Datuk Seri Najib Razak said the complex had recently also drawn the interest of a Taiwan-based petrochemical company, which is conducting an investment study to build an integrated oil and petrochemical complex to complement the Petronas Rapid project. Najib said the Taiwan petrochemical company’s project was worth between US$10 billion and US$12billion (RM30.72 billion and RM36.86 billion). “Both projects will benefit from the shared amenities and infrastructure. The complex consists of a refinery with a 150,000-barrel-a-day capacity and a naphtha cracker with a 800,000-tonne capacity per year. Sultan of Johor Sultan Ibrahim Sultan Iskandar launched the project. PETRONAS.