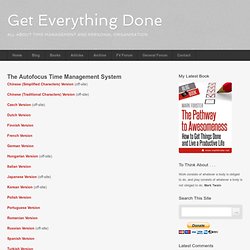 Whining, Blue Smoke & the Mechanics of Getting Unstuck. I've been working on a bunch of (non-43 Folders-related) stuff lately, but I started feeling that hankering to come back and write something new here. 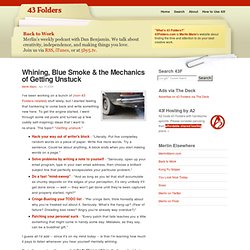 To get the engine started, I went through some old posts and turned up a few (oddly self-inspiring) ideas that I want to re-share. The topic? "Getting unstuck. " Hack your way out of writer's block - "Literally. Put five completley random words on a piece of paper. I guess all I'd add -- since it's on my mind today -- is that I'm learning how much it pays to listen whenever you hear yourself mentally whining. First off, even when it's yourself, nobody likes a whiner. But, second, and perhaps more importantly, that whining should be telling you something. Once you pinpoint where that whine's coming from, that's the perfect opportunity to decide what the hell the hang-up is. And once that obstacle is identified and out there, ample methods exist for helping you execute in a way that's sane and sensible. Put automotively? As for me? » Tired of Being Tired. ‘A man grows most tired while standing still.’ 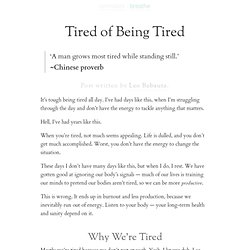 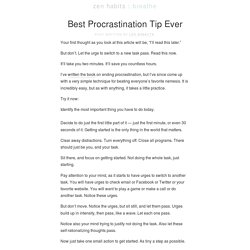 Your first thought as you look at this article will be, “I’ll read this later.” But don’t. Let the urge to switch to a new task pass. Read this now. It’ll take you two minutes. I’ve written the book on ending procrastination, but I’ve since come up with a very simple technique for beating everyone’s favorite nemesis.

Try it now: Identify the most important thing you have to do today. Clear away distractions. Sit there, and focus on getting started. Pay attention to your mind, as it starts to have urges to switch to another task. But don’t move. Notice also your mind trying to justify not doing the task. Now just take one small action to get started. Get started, and the rest will flow. » 9 Mindfulness Rituals to Make Your Day Better. “Smile, breathe and go slowly.” - Thich Nhat Hanh, Zen Buddhist monk Post written by Leo Babauta. 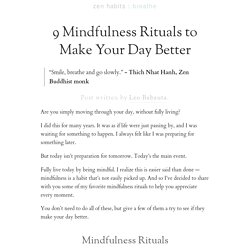 Are you simply moving through your day, without fully living? I did this for many years. It was as if life were just passing by, and I was waiting for something to happen. I always felt like I was preparing for something later. But today isn’t preparation for tomorrow. Fully live today by being mindful. You don’t need to do all of these, but give a few of them a try to see if they make your day better. Mindfulness Rituals Ritual isn’t about doing a routine mindlessly. Here are a few of my favorites: Building a Smarter To-Do List, Part I. Since new folks visit 43F each day, I thought it might be valuable to return to one of our most popular evergreen topics to review some "best practices" for keeping a good to-do list. 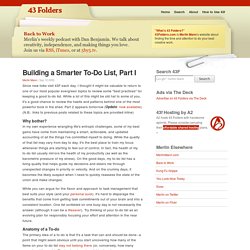 While a lot of this might be old hat to some of you, it's a good chance to review the habits and patterns behind one of the most powerful tools in the shed. Part 2 appears tomorrow (Update: now available). (N.B.: links to previous posts related to these topics are provided inline) Why bother? In my own experience wrangling life's entropic challenges, some of my best gains have come from maintaining a smart, actionable, and updated accounting of all the things I've committed myself to doing. While you can argue for the flavor and approach to task management that best suits your style (and your personal suck), it's hard to disparage the benefits that come from getting task commitments out of your brain and into a consistent location.

Anatomy of a To-do Break it Down to the “Next Action” Let's Get Physical.