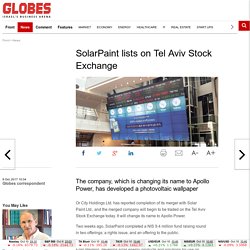 It will change its name to Apollo Power. Two weeks ago, SolarPaint completed a NIS 9.4 million fund raising round in two offerings: a rights issue, and an offering to the public. SolarPaint, which was founded by its CEO Oded Rozenberg and its CTO Eran Maimon, develops solar energy products and solutions for use on roads and infrastructures, water reservoirs, and buildings. Its main product is flexible photovoltaic wallpaper, designed to turn any surface under the sun into a power producer.

Start-Up Nation Finder. Inhabitat - Green Design, Innovation, Architecture, Green Building. Solar paint produces hydrogen from sunlight and water vapor : TreeHugger. There have been a few breakthroughs over the years that have promised a future where solar cells could be painted or sprayed onto surfaces for easy solar power, anywhere. 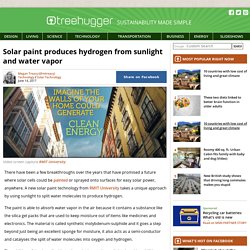 A new solar paint technology from RMIT University takes a unique approach by using sunlight to split water molecules to produce hydrogen. The paint is able to absorb water vapor in the air because it contains a substance like the silica gel packs that are used to keep moisture out of items like medicines and electronics. The material is called synthetic molybdenum-sulphide and it goes a step beyond just being an excellent sponge for moisture, it also acts as a semi-conductor and catalyses the split of water molecules into oxygen and hydrogen. The addition of titanium dioxide to the paint boosts its sunlight absorbing abilities, making the paint into a hydrogen fuel plant that can be applied to any surface.

"Our new development has a big range of advantages. A way for solar cells to capture more sunlight. Like picky eaters, silicon solar cells absorb only some of the Sun’s wavelengths and let the rest go to waste. 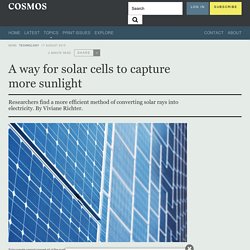 Researchers at the University of California, Riverside, have now figured out how to capture some of these wasted wavelengths and convert them into electricity. They published their work in Nano Letters in July. The idea should give existing solar technologies “a little extra oomph”, lead author Christopher Bardeen explains. When a light photon hits a solar cell, it knocks free an electron that drives an electrical “photovoltaic” circuit. But only energetic, short-wavelength photons carry enough punch to do this.

But Bardeen and colleagues have figured out how to turn low energy infrared rays into a higher energy form. The idea should give existing technologies "a little extra oomph". Bardeen’s light converting technique combines lead selenide nanocrystals with a carbon-based molecule called rubrene. So far, the nanoparticles have only been tested in a solution. Shedding light on solar potential in all 50 U.S. States. Solar Lighting. Technology - SolaRoad. Paving the way to tomorrow’s energy. Your Solar Link Blog. CES 2016: Solar Powered Gadgets of the Future. by Maria Juniper, Contributing Editor The International Consumer Electronics Show (CES) is a prominent global electronics and technology focused trade show that takes place every year in Las Vegas. 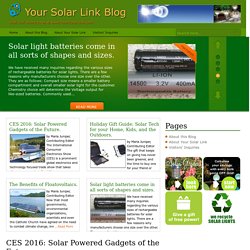 Held in January each year, it is known for introducing the latest technology trends and most innovative electronics. SunPower Seeks to Drive Down Commercial Solar Costs With New Integrated Platform. In 2010, SunPower launched Oasis, a preconfigured solar power block for utility-scale projects. 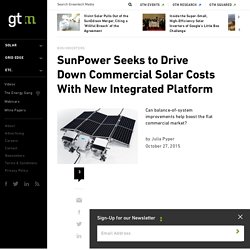 The modular systems are made up of standardized components designed to streamline project development and, ultimately, cut costs. Five years later, after three product updates and several gigawatts' worth of solar array deployments, SunPower is bringing the modular concept to the commercial market. On Monday, SunPower launched Helix, a fully integrated commercial solar solution that combines solar power production and energy management.

The platform covers all major application types for solar across roof, carport and ground installations. “With standardized Helix components, we have eliminated the inefficiencies and added costs of complex system design,” said Tom Werner, president and CEO of SunPower. Thinnest, lightest, solar cells ever created outperform their bulky glass brethren. Using gossamer-like layers of flexible polymers, researchers at MIT have created the thinnest and lightest solar cells ever made. 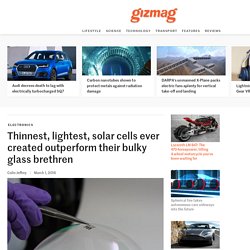 Just one-fiftieth the thickness of a human hair, and capable of producing up to 6 watts of power per gram, these cells are so thin and light that they can be supported on the surface of a soap bubble without breaking it. With such impressive credentials, the prototype cells have the potential to add solar power to everything from paper-based electronics through to all manner of mobile devices and exceptionally lightweight wearables. Though flexible solar cells are hardly a new innovation, even being produced experimentally in everything from continuously printed rolls to spray on panels, the power-to-weight ratio is where these new cells come into their own.

With a demonstrated output of 6 watts per gram, they produce an output some 400 times greater than standard glass-covered solar cells that generate about 15 watts of power per kilogram on average. 3D solar towers offer up to 20 times more power output than traditional flat solar panels. While we’ve looked at the development of solar cell technologies that employ nanoscale 3D structures to trap light and increase the amount of solar energy absorbed, MIT researchers have now used 3D on the macro scale to achieve power output that is up to 20 times greater than traditional fixed flat solar panels with the same base area. 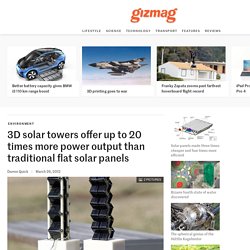 The approach developed by the researchers involves extending the solar cells upwards in a three-dimensional tower or cube configuration to enable them to better capture the sun's rays when it is lower on the horizon. Solar panels placed flat on a rooftop are most effective at harnessing solar energy when the sun is close to directly overhead, but quickly lose their efficiency as the angle of the sun’s rays hitting the panel increases – during the mornings, evenings, in the cooler months and in locations far from the equator.

It is exactly in these situations that the researcher’s vertical solar modules provided the biggest boosts in power output.