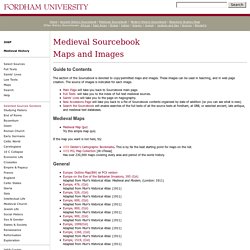 These images can be used in teaching, and in web page creation. The source of images is indicated for each image. Main Page will take you back to Sourcebook main page. General Rome The Western Empire, 395 (Col) Adapted from Muir's Historical Atlas: (1911) Theodora: Brooklyn Museum. Empress Theodora was born into the lowest classes of Byzantine society, eventually advancing to rule over the Byzantine Empire equally with her husband. 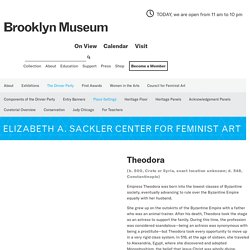 She grew up on the outskirts of the Byzantine Empire with a father who was an animal trainer. After his death, Theodora took the stage as an actress to support the family. Ancient History Encyclopedia: Byzantine. History, Geography, Maps, & Facts. The MET: Byzantium (ca. 330–1453) Best of History Sites: Rome and More. Rome Web Sites. 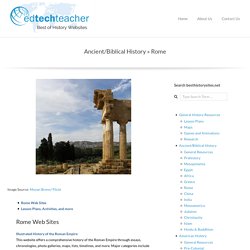 Medieval and Byzantine art (video) Internet History Sourcebooks: Byzantine Studies on the Internet. Introduction Byzantium is the name given to both the state and the culture of the Eastern Roman Empire in the middle ages. 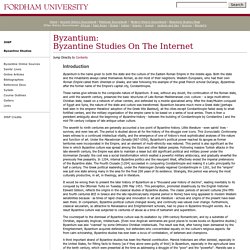 Both the state and the inhabitants always called themselves Roman, as did most of their neighbors. Western Europeans, who had their own Roman Empire called them Orientals or Greeks, and later following the example of the great French scholar DuCange, Byzantines after the former name of the Empire's capital city, Constantinople. These names give witness to the composite nature of Byzantium. It was, without any doubt, the continuation of the Roman state, and until the seventh century, preserved the basic structures of Late Roman Mediterranean civic culture: - a large multi-ethnic Christian state, based on a network of urban centers, and defended by a mobile specialized army. 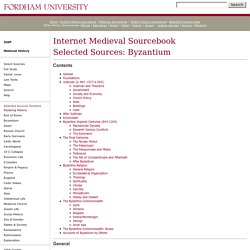 Paul of Aigina: The Epitome, excerpts. [a medical text] A Byzantine Mathematics Textbook, 888: [Page image] With Euclidean theorems. Foundations Sozomen (d. c. 450 CE): Constantine Founds Constantinople, 324, from Ecclesiastical History 2.3 Notitia Dignitatum (Register of Dignitaries) A list of all the officials in the Roman Empire, East and West, c.400 Justinian (b.483- r.527-d.565) Justinian and Theodora Procopius: On Justinian. , from Secret History. The Great Schism Explained. The Great Schism Explained What Happened In 1054? 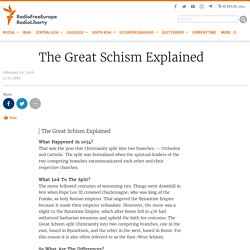 That was the year that Christianity split into two branches -- Orthodox and Catholic. Saint George Greek Orthodox Cathedral. What caused the split of the Church between East and West? 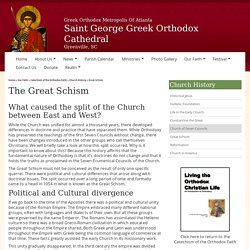 While the Church was unified for almost a thousand years, there developed differences in doctrine and practice that have separated them. While Orthodoxy has preserved the teachings of the first Seven Councils without change, there have been changes introduced in the other groups who call themselves Christians. We will briefly take a look at how this split occurred. Why is it important to know about this? The rise and fall of the Byzantine Empire - Leonora Neville. Justinian and the Byzantine Empire (video) History Channel: Byzantine Empire. The Byzantine Empire was a vast and powerful civilization with origins that can be traced to 330 A.D., when the Roman emperor Constantine I dedicated a “New Rome” on the site of the ancient Greek colony of Byzantium. 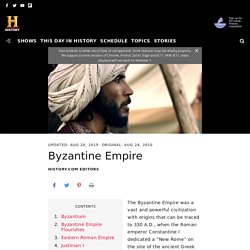 Though the western half of the Roman Empire crumbled and fell in 476 A.D., the eastern half survived for 1,000 more years, spawning a rich tradition of art, literature and learning and serving as a military buffer between Europe and Asia. The Byzantine Empire finally fell in 1453, after an Ottoman army stormed Constantinople during the reign of Constantine XI. Byzantium The term “Byzantine” derives from Byzantium, an ancient Greek colony founded by a man named Byzas. Comparing Roman and Byzantine Empires (video) Definition, Origin, History, & Facts. Orthodoxy under the Ottomans (1453–1821) The Christian ghetto According to Muslim belief, Christians as well as Jews were “people of the Book”—i.e., their religion was seen as not entirely false but incomplete. Accordingly, provided that Christians submitted to the dominion of the caliphate and the Muslim political administration and paid appropriate taxes, they deserved consideration and freedom of worship.

Any Christian mission or proselytism among the Muslims, however, was considered a capital crime. In fact, Christians were formally reduced to a ghetto existence: they were the Rūm millet, or “Roman nation” conquered by Islam but enjoying a certain internal autonomy. The new system had many significant consequences. Discover Islamic Art Virtual Exhibitions. The city of walls: Constantinople - Lars Brownworth. The Eastern Romans (Byzantines) were famous for their cleverness. 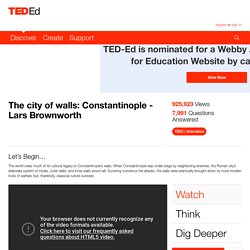 In addition to the mysterious Greek Fire (we still don’t know exactly how they made it), they had an early form of air conditioning, hydraulic powered doors, and ‘automatons’- powered statues of lions and birds that could roar or sing at the touch of a lever. Find an example of something extrodinary invented or discovered by these ancient people and describe why it's so incredible. The term Byzantine was coined by a historian trying to discredit Constantinople by saying it wasn’t Roman.