7 Photographic Tricks, Hoaxes, and Fads Before Photoshop. This is the second installment in a short series of articles on photo manipulation in the days before computers. 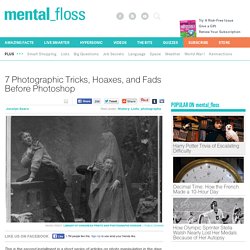 The first explained how photo retouching worked before Photoshop. You know the old cliché: The camera doesn’t lie. But that wasn’t true even before computers made it possible to alter reality with the click of a mouse. As soon as photography came onto the scene—offering an unprecedented opportunity to record the world—people figured out how to use this new technology to distort the world for fun and profit. Read on to discover some favorite photographic tricks from the 19th and early 20th centuries. In 1862, a jewelry engraver in Boston named William H. Mumler was accused of fraud by the State of New York in 1869. Little girl taking her own picture. One of the simplest and most popular photographic tricks from the 19th century was the doppelgänger portrait. The possibilities offered by the duplicator were endless. “Frank Bonds wheeling himself in wheelbarrow. "

Light Painting Photography. Photography comes from the Greek words phos (“light”), and graphis (“stylus”, “paintbrush”) or graphí, together they mean “drawing with light”. 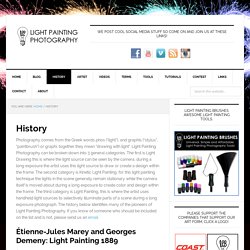 Light Painting Photography can be broken down into 3 general categories. The first is Light Drawing this is where the light source can be seen by the camera, during a long exposure the artist uses this light source to draw or create a design within the frame. The second category is Kinetic Light Painting, for this light painting technique the lights in the scene generally remain stationary while the camera itself is moved about during a long exposure to create color and design within the frame.

Half Past Autumn: The Life and Work of Gordon Parks. History of Photography. Image Lab. The First Ever Photo Showing Light as Both a Particle and a Wave. 170 Years of African Americans in Photos. About the Film The first documentary to explore the role of photography in shaping the identity, aspirations, and social emergence of African Americans from slavery to the present, Through a Lens Darkly: Black Photographers and the Emergence of a People probes the recesses of American history through images that have been suppressed, forgotten, and lost. 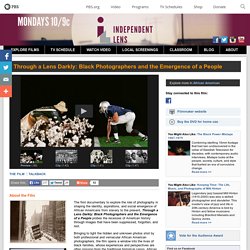 Bringing to light the hidden and unknown photos shot by both professional and vernacular African American photographers, the film opens a window into the lives of black families, whose experiences and perspectives are often missing from the traditional historical canon. African Americans historically embraced the medium as a way to subvert popular stereotypes as far back as the Civil War era, with Frederick Douglass photographed in a suit and black soldiers posing proudly in their uniforms. These images show a much more complex and nuanced view of American culture and its founding ideals.

Photographer’s Profile of the Day… Jules Lion - Prof. Boerner's Explorations. By Gerald Boerner Jules Lion was a free man of color who emigrated from France and settled in New Orleans, Louisiana. 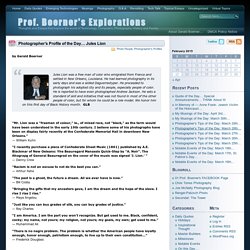 He had learned photography in its early days and was a skilled Daguerreotyper. He proceeded to photograph his adopted city and its people, especially people of color. He is reported to have even photographed Andrew Jackson. He sets a standard of skill and initiative that was not found in most of the other people of color, but for whom he could be a role model. “Mr. “I recently purchase a piece of Confederate Sheet Music (1861) published by A.E. “Racism is not an excuse to not do the best you can.” — Arthur Ashe “The past is a ghost, the future a dream. “Bringing the gifts that my ancestors gave, I am the dream and the hope of the slave. “Just like you can buy grades of silk, you can buy grades of justice.” — Ray Charles “I am America. “There is no negro problem. Jules Lion (c. 1809-1866) Jules Lion, born in France, was an early American photographer. Jules Lion’s Work.