Psychology Careers. Untitled. The Ekmans' Atlas of Emotions. Welcome to the Atlas of Emotions This atlas was inspired by a series of conversations between the Dalai Lama and Paul Ekman about the science of emotions. 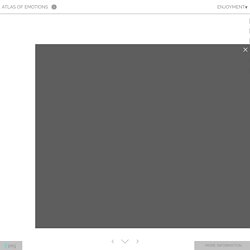 With the help of Stamen Design and Paul’s daughter, Dr. Eve Ekman, this tool was created to be a visual journey through the world of emotions. Learn more about the work of Paul Ekman at www.paulekman.com. What it’s based on In June 2014, Paul Ekman sent a survey to 248 of the most active emotion researchers in the world to establish the consensus that provided the scientific basis for this atlas. 76%Enjoyment is universal How to navigate This collection of maps is an opportunity for you to explore the landscape of emotions, where they come from, and the effects they can have.

Psychology. Brain Games Season 4. When it comes to making a decision, whether we're taking sides on a complex political issue or simply deciding when and where to cross the street, we habitually extol the virtues of using something called common sense. 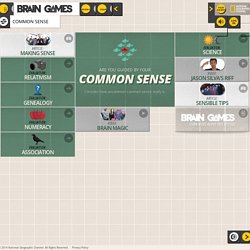 As sociologist Duncan C. Watts defines it, common sense is "the loosely organized set of facts, observations, experiences, insights, and pieces of received wisdom that each of us accumulates over a lifetime, in the course of encountering, dealing with, and learning from, everyday situations. " In more basic terms, it's our brain's ability to perceive the world in a common way . But what is the nature im of this universal wisdom that we see ourselves as having—this internal logical compass on which we place so much faith? As it turns out, what we think of as common sense is just another shortcut that our overworked brains have developed, which enables us to make countless decisions in the course of a day, sometimes without even being consciously aware of the process. The 13 Top Online Psychology Games. Brain and Behavior. Psychology Tests & Surveys. 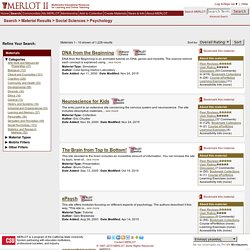 The science behind each concept is explained using... see more DNA from the Beginning is an animated tutorial on DNA, genes and heredity. The science behind each concept is explained using animations related to DNA topics, an image gallery, video interviews, problems, biographies, and links related to DNA. There are three sections, Classical Genetics, Molecules of Genetics and Organization of Genetic Material. Material Type: Simulation Author: Cold Spring Harbor Laboratory Date Added: Apr 11, 2000 Date Modified: Nov 24, 2015 Pick a Bookmark Collection or Course ePortfolio to put this material in or scroll to the bottom to create a new Bookmark Collection Name the Bookmark Collection to represent the materials you will add Describe the Bookmark Collection so other MERLOT users will know what it contains and if it has value for their work or teaching. Submitting Bookmarks... About this material: Case Study Collection - Search Results. Records 1 to 42 of 42 A Case of a Pheochromocytoma “Rollie Hendrix,” a 35-year-old husband and father of three children, has been experiencing headaches and palpitations of increasing frequency and severity over the past six months. 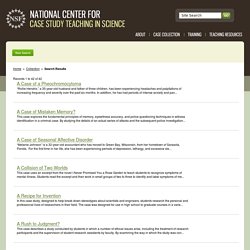 In addition, he has had periods of intense anxiety and pan... A Case of Mistaken Memory? This case explores the fundamental principles of memory, eyewitness accuracy, and police questioning techniques in witness identification in a criminal case. By studying the details of an actual series of attacks and the subsequent police investigation... A Case of Seasonal Affective Disorder “Melanie Johnson” is a 32-year-old accountant who has moved to Green Bay, Wisconsin, from her hometown of Sarasota, Florida.

A Collision of Two Worlds This case uses an excerpt from the novel I Never Promised You a Rose Garden to teach students to recognize symptoms of mental illness. Tracy Ore's Life Happens. Life Happens: A Work, Class & Access to Resources Exercise Created by:Tracy E. 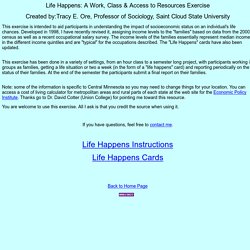 Ore, Professor of Sociology, Saint Cloud State University This exercise is intended to aid participants in understanding the impact of socioeconomic status on an individual's life chances. Making Connections. Teachingedpsych - home. Psychology Podcast and Blog. Personality Pedagogy - Main - HomePage. Correlation or Causation. One hour of extra screen time drags down teenagers' grades Lack of sleep may shrink your brain Low self-esteem "shrinks brain" Religious experiences shrink part of the brain To spoon or not to spoon? 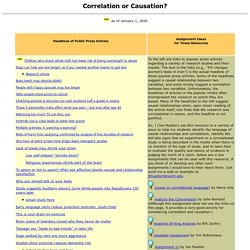