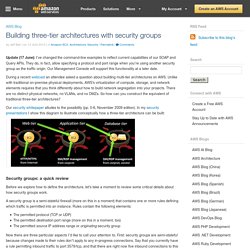 They do, in fact, allow specifying a protocol and port range when you’re using another security group as the traffic origin. Our Management Console will support this functionality at a later date. During a recent webcast an attendee asked a question about building multi-tier architectures on AWS. Unlike with traditional on-premise physical deployments, AWS’s virtualization of compute, storage, and network elements requires that you think differently about how to build network segregation into your projects.

There are no distinct physical networks, no VLANs, and no DMZs. Our security whitepaper alludes to the possibility (pp. 5-6, November 2009 edition). Security groups: a quick review Before we explore how to define the architecture, let’s take a moment to review some critical details about how security groups work. The second aspect is our terminology for port ranges. AWS Security Groups: Instance Level Security. Moving on from last week’s AWS Shared Responsibility Model post, I’d like to discuss instance level security within your Virtual Private Cloud (VPC). 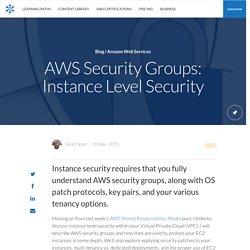 Type. Limits EC2 Key Pairs. Amazon EC2 Security Groups for Linux Instances. A security group acts as a virtual firewall that controls the traffic for one or more instances. 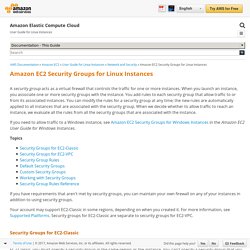 If you need to allow traffic to a Windows instance, see Amazon EC2 Security Groups for Windows Instances in the Amazon EC2 User Guide for Windows Instances. If you have requirements that aren't met by security groups, you can maintain your own firewall on any of your instances in addition to using security groups. Your account may support EC2-Classic in some regions, depending on when you created it. Security Groups for Your VPC - Amazon Virtual Private Cloud.

A security group acts as a virtual firewall for your instance to control inbound and outbound traffic. 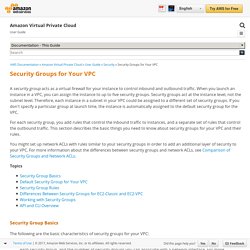