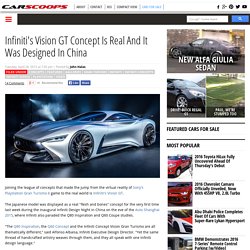 The Japanese model was displayed as a real "flesh and bones" concept for the very first time last week during the inaugural Infiniti Design Night in China on the eve of the Auto Shanghai 2015, where Infiniti also paraded the Q80 Inspiration and Q60 Coupe studies. "The Q80 Inspiration, the Q60 Concept and the Infiniti Concept Vision Gran Turismo are all thematically different," said Alfonso Albaisa, Infiniti Executive Design Director.

"Yet the same thread of handcrafted artistry weaves through them, and they all speak with one Infiniti design language. " This is What the Renault Alpine Vision GT Concept Looks Like Up Close! Since the 1:1 scale model of the Renault Alpine Vision GT concept for Gran Turismo 6 is not really a fully-functioning car, it’s more of a rolling sculpture. 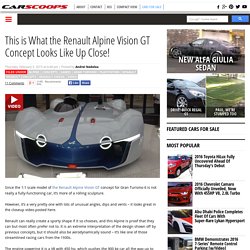 However, it’s a very pretty one with lots of unusual angles, dips and vents – it looks great in the closeup video posted here. Renault can really create a sporty shape if it so chooses, and this Alpine is proof that they can but most often prefer not to. It is an extreme interpretation of the design shown off by previous concepts, but it should also be aerodynamically sound – it’s like one of those streamlined racing cars from the 1930s. 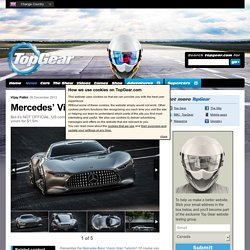 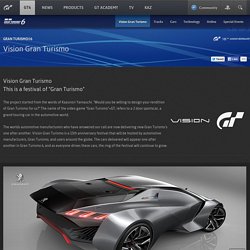 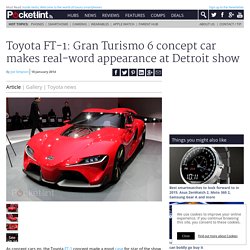 And if you’re gutted that you never actually get to go up close and personal with these types of concepts, then here's a little treat - because you can already "drive" the FT-1 as part of a special download made available for PlayStation racer Gran Turismo 6 (GT6). Car makers aren’t always known for being particularly responsive, but from our discussions with various makers it seems apparent that they are becoming increasingly worried that a generation of people are more interested in phones and video games, than cars.

That’s part of the reason why we’ve seen manufacturers like Mercedes-Benz with its Vision GT Concept and now Toyota, creating concepts specifically for racing games. And there’ll be more to come. In Detroit, Nissan’s global design chief told us his company was developing something unique for GT6 too. Nissan Concept 2020 Vision Gran Turismo gets real at Goodwood. Virtual reality became reality reality at the Goodwood Festival of Speed this week as Nissan unveiled the physical version of its Concept 2020 Vision Gran Turismo “virtual supercar.” 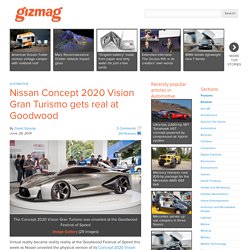 The futuristic concept will be available next month as an avatar in PlayStation Gran Turismo 6 to celebrate the 15th anniversary of the driving game. The 2020 Vision started life as a study model for young designers at Nissan Design Europe in London. Borrowing design cues from current Nissan supercars and adding a dash of the futuristic, the results were impressive enough to engage a Nissan engineering team in Japan to make the four-wheel drive chassis with active suspension more realistic. It was duly tweaked from an engineering point of view so that the aerodynamics would match the aesthetics. The design was later adapted as an avatar for the Gran Turismo 6 video game along with models from 28 other car makers, who were invited to participate in filling the game’s virtual garage. Citroen GT start up + HUGE sounds !!! Chevy Chaparral 2X Vision Gran Turismo Concept - 2014 LA Auto Show. 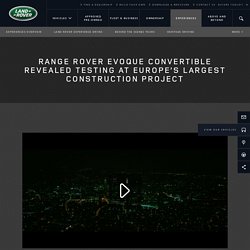 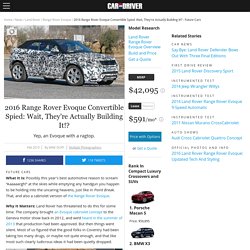 At the skies while emptying any handgun you happen to be holding into the uncaring heavens, just like in Point Break. That, and also a cabriolet version of the Range Rover Evoque. Why It Matters: Land Rover has threatened to do this for some time. The company brought an Evoque cabriolet concept to the Geneva motor show back in 2012, and we’d heard in the summer of 2013 that production had been approved. But then things went silent. Range Rover Evoque 2016: První statické dojmy. Range Rover Evoque 2016: Nový diesel, LED světla a změny vzhledu. „Malý“ Evoque se prodává velmi dobře, za necelé čtyři roky si našel už přes 400 tisíc klientů, jen doma v Británii se jich prodalo 62 tisíc. 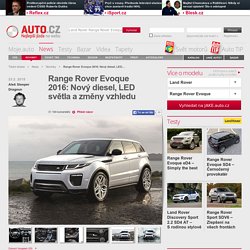 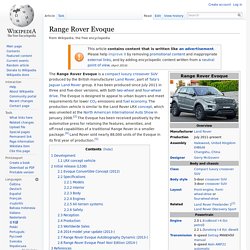 Nový Range Rover Evoque 2014: Co nového přináší? 08.09.2013 | Autor: redakce. 2016 Range Rover Evoque Convertible Spy Photos. 2016 Land Rover Range Rover Evoque Photos and Info. Land Rover has released details and images of the updated 2016 Evoque ahead of its full reveal at the upcoming 2015 Geneva auto show. Rover was careful to leave intact the chunky and charming aesthetics of its bestselling model, instead focusing on a much-need revision to its dated and stutter-prone infotainment system and—in Europe, at least—bringing a pair of diesel engine options to the table. The trim-level hierarchy also has been reordered to align with that of the Range Rover Sport, with the Evoque now available in SE, HSE, HSE Dynamic, and Autobiography versions. (FYI: A convertible Evoque is also in the works.) A new front bumper punctuated by a pair of larger, more-aggressive air intakes and featuring slim, integrated LED fog lamps leads the update, accompanied by two new grille designs.

The standard unit has two horizontal bars and a fine mesh pattern, while Evoque Dynamic models get a hexagonal pattern. Advertisement - Continue reading below. Press — The International Flag of Planet Earth. Car Accessories. Then and Wow: Past + Present Spare Tire Parking Aids. Getting your car into and out of tight parking spots is a problem that drivers have been dealing with since the very first generation of cars hit the road. Almost immediately after that, some wise soul had the idea to add a fifth wheel that lowers down to the street to swing a car’s back end out of parking spots. Although it was a brilliant concept, it never quite caught on in the mass market. This newsreel from the 1950s shows the original device patented by one Irvin Carpenter. The video shows in detail just how useful a fifth wheel could be for people looking to drive into and out of otherwise-inaccessible spaces. This video from Egypt shows that the concept is still alive and well today.

Light Phone. Flag of the Earth. The idea of a flag of the Earth is a flag used to represent the Earth. Concepts revolving around this theme include political, spiritual and environmental aspects of the planet. Although there is no internationally agreed upon flag to represent the whole planet, some individuals and organizations have promoted designs for a flag. To date no flag has received any "official recognition" by any governmental body. When We Go to Mars We'll Need a Flag for Earth. Picture man landing on the Moon and somewhere in the image there’s probably an iconic emblem: the American flag. But a Swedish design student thinks that a national flag alone doesn’t suffice for space missions. When they venture beyond our planet, astronauts are not only representatives of their own country; they are ambassadors for Earth.

So 24-year-old Oskar Pernefeldt has designed a new flag, the International Flag of Planet Earth. Pernefeldt told me the idea started when he thought of how the flags we use now were originally used at sea, and we’re now voyaging in a different space. My jsme svět / We Are the World - MATĚJ SMETANA. My jsme svět, 2008instalacesyntetická textilie14ks. 157 x 105 cm6. bienale mladého umění Zvon, Dům u Kamenného zvonu, Praha Bienala Tinerilor Artisti, Sala Dalles, Bucuresti, Rumunsko 14 nalezených existujících verzí univerzální světové vlajky. V76 by Vaughn - Thaddeus.

Front Runner Spare Tire BBQ Grate. Have you ever yearned for an adventure where the open road meets the unexplored? It’s easy to hop in your SUV for an off road adventure, but what do you do when you get hungry? Power bars start off great but can taste like sawdust. You need a hot meal, but towing your Weber behind isn’t practical. That’s where the Front Runner Spare Tire Mount Braai cooking grate comes in.

This all stainless steel grate stores over your spare tire and takes up virtually no space. Decked Truck Bed Organizer. Throwing tools in the back of a pickup truck is like using a garbage bag instead of a backpack to lug your laptop and gear – it’s messy, likely loud, and stuff’s bound to get damaged. Best Dune Buggies. Remember when you and Dad slapped together that go-kart with some metal tubing and an old lawnmower engine? Yeah, neither do we. But the kid down the street, he and his dad had that one-seater with the roll cage, and damn it, someday, you said, you’d outman him and have something bigger and better.

Fast forward to today, and it’s time to beat the Joneses. Four-Wheel Drive vs All-Wheel-Drive: Everything You Need to Know. 7 Best Off-Road Trailers. Moby 1 XTR There are more luxurious trailers, and there are more compact ones. Dominator Track System. AutoSock Winter Traction Device. Defender - Uncrate. Why Heavier Cars are Safer. Editor’s Note: Our talk of cars tends to be related to a wide variety of topics like speed, looks, comfort and fuel mileage. Yet often overlooked — both by enthusiasts and everyday drivers — is one of the most important factors: safety. This week, we’re taking a deeper look at how modern vehicles are keeping you and your loved ones safe. We start here, with a review of how the National Highway Traffic Safety Administration tests cars’ performance in accidents — and how they’re getting it wrong. ize matters in cars, and not just for carrying more passengers, extra fuel or having the space for a bigger engine.