Life in the trenches

Life in the trenches theme ideas. Life in the trenches information. BBC Bitesize - What was it like in a World War One trench? 10 Photos of Life in the Trenches. Soldiersequipment. BBC Schools - Trench food. 18 February 2014Last updated at 17:06 British soldiers eating hot rations in the Ancre Valley during the Battle of the Somme, October 1916 Maconochie's meat stew advertisement Even though food was very short in Britain during World War One, families often sent parcels to their fathers and brothers fighting at the front. 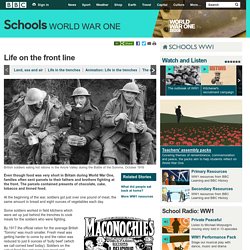 The parcels contained presents of chocolate, cake, tobacco and tinned food. At the beginning of the war, soldiers got just over one pound of meat, the same amount in bread and eight ounces of vegetables each day. BBC Schools - Life in the trenches. 31 October 2014Last updated at 15:07 Two British soldiers standing in a flooded communication trench during World War One On the Western Front, the war was fought in trenches. Trenches were long, narrow ditches dug into the ground where soldiers lived all day and night. There were many lines of German trenches on one side and many lines of Allied trenches on the other.

In the middle, was no man's land, so-called because it did not belong to either army. Living in the Trenches. Pigeon vs telephone: which worked best in the trenches? BBC iWonder - How did so many soldiers survive the trenches?