Technology Integration Matrix. Meaningful rote learning and the ‘Chinese Learner Paradox’ Guest post by Mark Souter, psychology and sociology teacher There is good research evidence to show that systematic drills, such as those provided by Learnclick, can enhance learning. 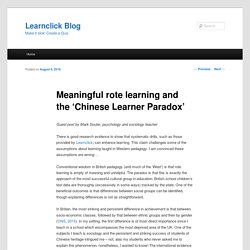 This claim challenges some of the assumptions about learning taught in Western pedagogy. I am convinced these assumptions are wrong … Conventional wisdom in British pedagogy (and much of the ‘West’) is that rote learning is empty of meaning and unhelpful. The paradox is that this is exactly the approach of the most successful cultural group in education. In Britain, the most striking and persistent difference in achievement is that between socio-economic classes, followed by that between ethnic groups and then by gender (ONS, 2015). Such is the healthy state of British social science that detailed research has been carried out on possible causes of this difference.

It seems entirely unreasonable to assume that the academic performance shown by these students happens in spite of their labours.

OCR Psychology Y1. OCR Pysychology Y2. Behaviourist models linking stimulus and response - Pavlov. Drag the boxes onto the matching gaps. temporalconditionedStimulusResponseBellneutralfoodClassicalsalivationunconditionedassociatereflex10-12salivate Pavlovian Conditioning Pavlov (1902) started from the idea that there are some things that a dog does not need to learn. 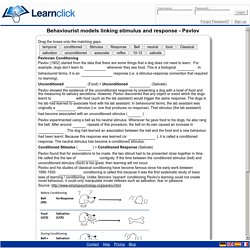 For example, dogs don’t learn to whenever they see food. This is a biological . Unconditioned (Food) > Unconditioned (Salivate) Pavlov showed the existence of the unconditioned response by presenting a dog with a bowl of food and the measuring its salivary secretions. Pavlov experimented using a bell as his neutral stimulus. Conditioned Stimulus ( ) > Conditioned Response (Salivate) Pavlov found that for associations to be made, the two stimuli had to be presented close together in time.

Pavlov and his studies of classical conditioning have become famous since his early work between 1890-1930. conditioning is called this because it was the first systematic study of basic laws of learning / conditioning. Source: Resourcd Webinars. 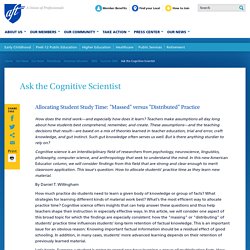 Teachers make assumptions all day long about how students best comprehend, remember, and create. These assumptions—and the teaching decisions that result—are based on a mix of theories learned in teacher education, trial and error, craft knowledge, and gut instinct. Such gut knowledge often serves us well. But is there anything sturdier to rely on? Cognitive science is an interdisciplinary field of researchers from psychology, neuroscience, linguistics, philosophy, computer science, and anthropology that seek to understand the mind.

By Daniel T. How much practice do students need to learn a given body of knowledge or group of facts? Let's begin. The spacing effect was noted by Hermann Ebbinghaus, the psychologist usually credited with the first scientific study of memory in 1885. The spacing effect has held up remarkably well over the better than one hundred years that researchers have examined it. Daniel T. References. Socrative. ClassTools.net. 6 Must-Have Creation Tools for the BYOD Classroom. Providing opportunities for students to make and create is essential in 21st-century classrooms. 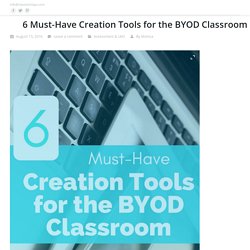 Children of all ages should experience the joy of seeing their work shared and celebrated. Classrooms with access to a variety of different tools have plenty of tech tool options. Are you a BYOD classroom? BYOD (bring your own device) is the term for schools that allow students to use a personal device as a learning tool.

Some BYOD schools have clear policies for how devices must be used in a classroom. The following list is designed as a starter guide for teachers looking to turn their students into creators. After you’ve picked a favorite, play around with it — just for fun. So let’s dive into my list of those must-have creation tools! Seesaw At ISTE earlier this year, I had the chance to connect with the folks at Seesaw as well as meet several Seesaw Ambassadors. Adobe Spark Adobe Spark is really a collection of three creation tools.