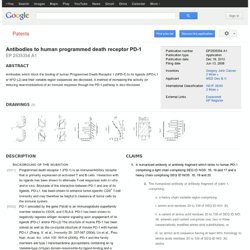 Binding molecules to the human ox40 receptor. [0001] This application claims the benefit of United States Provisional Application No. 61/013947 filed on 14 December 2007, which is incorporated herein by reference in its entity. [0002] The disclosure and claims herein were made as a result of activities undertaken within the scope of a joint research agreement in effect on or before the date the claimed invention was made between Pfizer Inc. and Medarex, Inc. [0003] The present disclosure relates to antibodies, and particularly to antibodies that bind to the OX40 receptor. [0004] Enhancing anti-tumor T cell function represents a powerful and novel approach for cancer treatment. 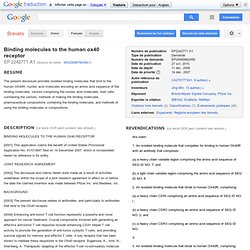 Crucial components involved with generating an effective anti-tumor T cell response include enhancing CD4+ helper T cell activity to promote the generation of anti-tumor cytolytic T cells, and providing survival signals for memory and effector T cells. A key receptor that has been shown to mediate these responses is the OX40 receptor. OX40R binding agents. Synthetic Chemicals Eclipse Hormones. 15th May 2012 By Sayer Ji - Wake Up World A new study published in the Journal of Applied Toxicology has raised some disturbing possibilities regarding the dangers of common hormone-mimicking preservatives found in thousands of consumer products on the market today. [1] Titled “Parabens detection in different zones of the human breast: consideration of source and implications of findings,” researchers discussed the role that parabens — a class of estrogen-mimicking chemicals widely used in drugs, foods and cosmetics — may have in breast cancer and childhood disease. 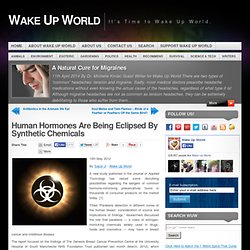 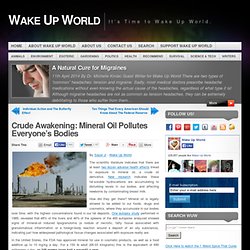 New research indicates these fat-soluble hydrocarbons are accumulating to disturbing levels in our bodies, and affecting newborns by contaminating breast milk. Gardasil pushed on millions of children. Anthony GucciardiNaturalNews Gardasil is a vaccination that has been linked to multiple deaths and over 8,000 adverse reactions. 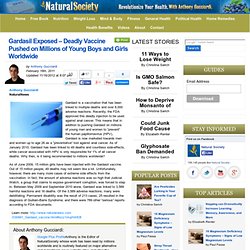 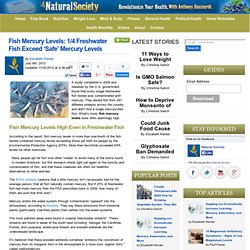 They tested fish from 291 different streams across the country and didn’t find a single mercury-free fish. What’s more, fish mercury levels were often alarmingly high. According to the report, fish mercury levels in more than one-fourth of the fish tested contained mercury levels exceeding those set forth for people by the Environmental Protection Agency (EPA). More than two-thirds exceeded EPA levels for other mammals. High-Fructose Corn Syrup Contains Mercury. In 2009, a study found that almost half of commercial high-fructose corn syrup (HFCS) contained mercury — a carcinogenic chemical element that is toxic in all its forms to the human body. 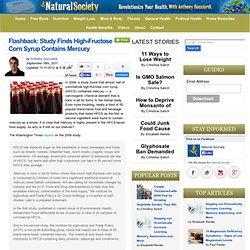 Even more troubling, nearly a third of 55 popular brand-name food and beverage products that listed HFCS as the first or second ingredient were found to contain mercury as a whole. It is clear that mercury is highly present in the HFCS-laced food supply, so why is it still on our shelves? The Washington Times reports on the 2009 study: HFCS has replaced sugar as the sweetener in many beverages and foods such as breads, cereals, breakfast bars, lunch meats, yogurts, soups and condiments.

On average, Americans consume about 12 teaspoons per day of HFCS, but teens and other high consumers can take in 80 percent more HFCS than average. From around the web: Stupidity Linked to High-Fructose Corn Syrup. The average American eats 35 pounds of high-fructose corn syrup per year, a hazardous ingredient that recent research has linked to a significant decrease in brain function related to both memory and learning. 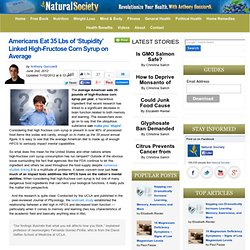 The researchers even go on to say that the ubiquitous substance can make you ‘stupid’. Considering that high fructose corn syrup is present in over 90% of processed food items like sodas and candy, enough so to make up the 35 pound annual figure, it is easy to see that the average American diet is made up of enough HFCS to seriously impact mental capabilities. High-Fructose Corn Syrup Damages Learning, Memory. Fluoride Linked to Cardiac Failure. Groundbreaking new research has linked sodium fluoride to cardiovascular disease, the leading cause of death worldwide. 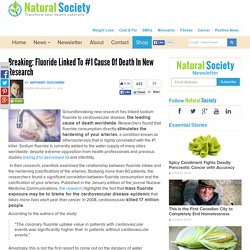 Researchers found that fluoride consumption directly stimulates the hardening of your arteries, a condition known as atherosclerosis that is highly correlated with the #1 killer. Sodium fluoride is currently added to the water supply of many cities worldwide, despite extreme opposition from health professionals and previous studies linking it to decreased IQ and infertility. In their research, scientists examined the relationship between fluoride intake and the hardening (calcification) of the arteries. Studying more than 60 patients, the researchers found a significant correlation between fluoride consumption and the calcification of your arteries. According to the authors of the study: “The coronary fluoride uptake value in patients with cardiovascular events was significantly higher than in patients without cardiovascular events.” Risk and Safety Phrases. Fluoride Shown to Cause Cancer.