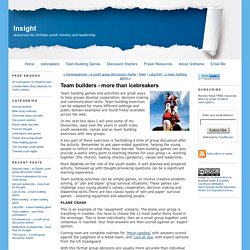 Team building exercises can be adapted for many different settings and public domain examples are found freely available across the web. In the next few days I will post some of my favourites, used over the years in youth clubs, youth weekends, camps and as team building exercises with new groups. A key part of these exercises is facilitating a time of group discussion after the activity. Remember to ask open-ended questions, helping the young people to reflect on what they have learned. Team building games can also provide a useful entry point to teaching themes for your group i.e. working together (the church), making choices (guidance), values and leadership. Much depends on the role of the youth leader. Team building activities can be simple games, or involve creative problem-solving, or ‘pen and paper’ group survival situations. Remember to discuss, Logic Puzzles. Untitled. Untitled. Expand Your Mind (VISUAL LOGIC PUZZLES)

Expand Your Mind (CLASSIC LOGIC PROBLEMS) Einstein's Puzzle. # Copyright (C) 2004 Lauri Karttunen # # This program is free software; you can redistribute it and/or modify # it under the terms of GNU General Public License as published by # the Free Software Foundation; either version 2 of the License, or # (at your option) any later version. # This program is distributed in the hope that it will be useful, # but WITHOUT ANY WARRANTY; without even the implied warranty of # MERCHANTABILITY or FITNESS FOR A PARTICULAR PURPOSE. 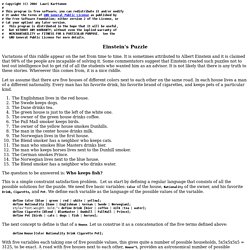 See the # GNU General Public License for more details. Einstein's Puzzle Variations of this riddle appear on the net from time to time. It is sometimes attributed to Albert Einstein and it is claimed that 98% of the people are incapable of solving it. Some commentators suggest that Einstein created such puzzles not to test out intelligence but to get rid of all the students who wanted him as an advisor. Let us assume that there are five houses of different colors next to each other on the same road. Logic Puzzle - Who Owns The Fish? There are five houses in a row and in five different colors. 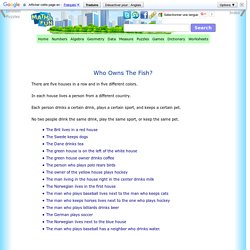 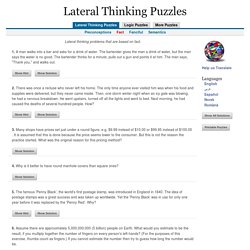 A man walks into a bar and asks for a drink of water. The bartender gives the man a drink of water, but the man says the water is no good. The bartender thinks for a minute, pulls out a gun and points it at him. The man says, "Thank you," and walks out. Hint: Please do not try this at home. Solution: The man has hiccups; the bartender scares them away by pulling a gun. A Colombian man accidentally shot his nephew to death while trying to cure his hiccups by pointing a revolver at him to scare him, police in the Caribbean port city of Barranquilla said on Tuesday, the 24th of January 2006.

After shooting 21-year-old university student David Galvan in the neck, his uncle, Rafael Vargas, 35, was so distraught he turned the gun on himself and committed suicide, police said. The incident took place on Sunday night while the two were having drinks with neighbors. "They were drinking but they were aware of what was going on," one witness said. 2.