Death To PowerPoint: How To Speak Like A Pro Without The Slides. The more times I give my standard speech on time management, the more aware I am of something curious. 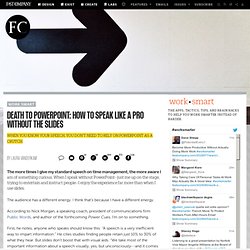 When I speak without PowerPoint--just me up on the stage, trying to entertain and instruct people--I enjoy the experience far more than when I use slides. The audience has a different energy. I think that’s because I have a different energy. According to Nick Morgan, a speaking coach, president of communications firm Public Words, and author of the forthcoming Power Cues, I’m on to something. First, he notes, anyone who speaks should know this: “A speech is a very inefficient way to impart information.” Human beings aren’t good multi-taskers. Indeed, as Scott Berkun, a frequent speaker and author of The Year Without Pants, recently wrote in a blog post, “Look at any list of the best speeches of all time and you won’t find a single use of slides or other props. Of course, as Morgan notes, “Because the norm is to use slides, going without is a high-wire act. Step Two: limit your points.

Cicero’s Web: How Social Media Was Born in Ancient Rome. By Maria Popova How the dynamics of papyrus scrolls explain Facebook. 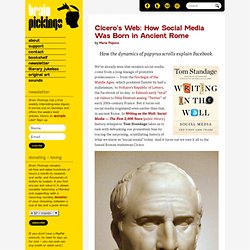 We’ve already seen that modern social media come from a long lineage of primitive predecessors — from the florilegia of the Middle Ages, which predated Tumblr by half a millennium, to Voltaire’s Republic of Letters, the Facebook of its day, to Edison’s early “viral” cat videos to Félix Fénéon’s analog “Twitter” of early 20th-century France. But it turns out social media originated even earlier than that, in ancient Rome. In Writing on the Wall: Social Media — The First 2,000 Years (public library), history-whisperer Tom Standage takes us to task with debunking our presentism bias by tracing the surprising, scintillating history of what we know as “social media” today. And it turns out we owe it all to the famed Roman statesman Cicero. In 51 B.C., the Roman Republic passed a new anti-corruption law, requiring high-ranking government officials to take up posts in the provinces.

The goal of argumentative writing is to persuade your audience that your ideas are valid, or more valid than someone else's. The Greek philosopher Aristotle divided the means of persuasion, appeals, into three categories--Ethos, Pathos, Logos. Ethos (Credibility), or ethical appeal, means convincing by the character of the author.

We tend to believe people whom we respect. One of the central problems of argumentation is to project an impression to the reader that you are someone worth listening to, in other words making yourself as author into an authority on the subject of the paper, as well as someone who is likable and worthy of respect. Pathos (Emotional) means persuading by appealing to the reader's emotions. Logos (Logical) means persuading by the use of reasoning. Ethos, Pathos, Logos. Top 100 Speeches of the 20th Century by Rank. TEDxFlanders - Lars Sudmann - On public speaking. Phil Davison - Plunderbund Insta-Legend.

Debates: Education. 17 Apr 2014 The case: Teaching creationism in US schools On April 11 2012, Tennessee passed a law that will protect teachers who choose to explore the merits of creationism alongside theories of evolution in public school science classes. 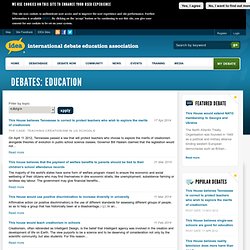 Governor Bill Haslam claimed that the legislation would not... 31 Mar 2014 The majority of the world's states have some form of welfare program meant to ensure the economic and social wellbeing of their citizens who may find themselves in dire economic straits, like unemployment, subsistence farming or landless day labour. 11 Mar 2014 Affirmative action (or positive discrimination) is the use of different standards for assessing different groups of people, so as to help a group that has historically been at a disadvantage.[1][2] In an... 11 Feb 2014 Creationism, often rebranded as Intelligent Design, is the belief that intelligent agency was involved in the creation and development of life on Earth. 30 Jan 2014 23 Jan 2014 15 Jan 2014 7 Jan 2014 14 Nov 2013. Untitled Document. 8 Steps To Great Digital Storytelling. Stories bring us together, encourage us to understand and empathize, and help us to communicate. Long before paper and books were common and affordable, information passed from generation to generation through this oral tradition of storytelling.

Consider Digital Storytelling as the 21st Century version of the age-old art of storytelling with a twist: digital tools now make it possible for anyone to create a story and share it with the world. WHY Digital Storytelling? Digital stories push students to become creators of content, rather than just consumers. Weaving together images, music, text, and voice, digital stories can be created in all content areas and at all grade levels while incorporating the 21st century skills of creating, communicating, and collaborating. Creating an infographic.