Apart from giving the latest news related to Aerospace MRO industry, we at MRO Business Today also treat our readers with exclusive interviews and feature stories. It generates worldwide readership through its website (www.mrobusinesstoday.com). Our digital magazine finds it way directly to their mail boxes every fortnight with all the relevant and latest news from the MRO Industry. 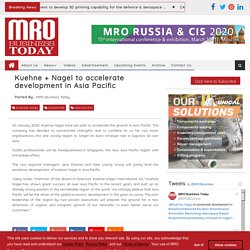 The company has decided to concentrate strengths and to combine its so far two Asian organisations into one strong region to target an even stronger role in logistics all over Asia. 10,000 professionals will be headquartered in Singapore, the new Asia Pacific region with immediate effect. The two regional managers Jens Drewes and Siew Loong Wong will jointly lead the ambitious development of Kuehne Nagel in Asia Pacific. Joerg Wolle, Chairman of the Board of Directors Kuehne Nagel International AG," Kuehne Nagel has shown great success all over Asia Pacific in the recent years and built up an already strong position in this remarkable region of the world. 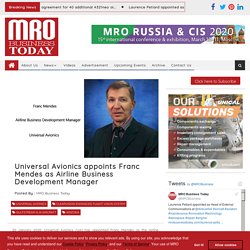 In this new role, Mendes will be responsible for introducing UA's product line including the ClearVision Enhanced Flight Vision System (EFVS) to the airline market. He will also support UA's Flight Department as a demonstration pilot for the company's Gulfstream G-III aircraft. Mendes will be based in Phoenix, Arizona (USA). Mendes has more than 24 years of experience in the aerospace industry. He was most recently the Technical and Safety Pilot for the Boeing Company in Shanghai, China. "Over the past year, UA has seen an increased interest from the airline market for EFVS solutions," said Scott Campbell. 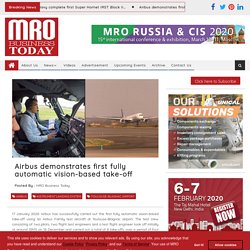 The test crew consisting of two pilots, two flight test engineers and a test flight engineer took off initially at around 10h15 on 18 December and carried out a total of 8 take-offs over a period of four and a half hours. "The aircraft performed as expected during these milestone tests. While completing alignment on the runway, waiting for clearance from air traffic control, we engaged the auto-pilot," said Airbus Test Pilot Captain Yann Beaufils. "We moved the throttle levers to the take-off setting and we monitored the aircraft.

It started to move and accelerate automatically maintaining the runway centre line, at the exact rotation speed as entered in the system. Air Canada’s Airbus A220 powered by Pratt & Whitney engines enter into service Engines. 17 January 2020: Air Canada's first A220 aircraft equipped with Pratt & Whitney GTF engines have entered into service. 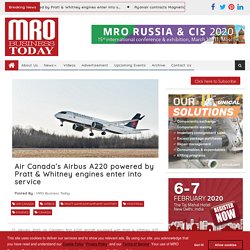 This event was celebrated by Pratt & Whitney, Airbus and Air Canada in Montreal at the headquarters of Air Canada. For Air Canada, the entry of the aircraft into service marks a significant milestone as the airline has become the first Canada-based A220 operator. Final assembly of Pratt & Whitney's PW1500G engines, which is equipped with the A220 aircraft has been completed in Canada. "Today is a special day and one that adds to the rich history between Pratt & Whitney and Air Canada. RUAG International fulfills enhanced 48-month inspection on an Embraer Lineage featuring ADS-B Out and full exterior aircraft painting. 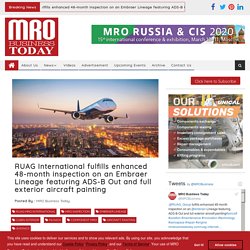 The customer chose to enhance the MRO downtime to ensure ADS-B Out and FANS compliance, implement a new livery, complete with full exterior repainting, and refurbish the cabin interior. RUAG's Embraer Authorized Service Center at Munich-Oberpfaffenhofen provided the one-stop shop support, enabling the customer to save on both time and costs. The project was completed on schedule and to full customer satisfaction. Looking to achieve a full aircraft refurbishment after a recent purchase, this Embraer Lineage customer contacted the RUAG one-stop shop in Munich. 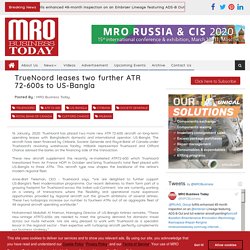 The aircraft have been financed by Citibank, Societe Generale and Royal Bank of Canada under TrueNoord's revolving warehouse facility. Milbank represented TrueNoord and Clifford Chance advised the banks on the financing side of the transaction. Etihad Airways, Easyjet enter into new partnership Technology. 15 January 2020: Etihad Airways has partnered with easyJet. 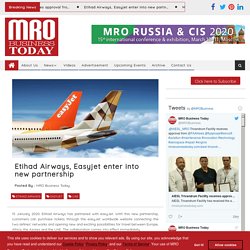 With this new partnership, customers can purchase tickets through the easyJet worldwide website connecting the two airlines' networks and opening new and exciting possibilities for travel between Europe, Africa, the Azores and the UAE. The collaboration comes into effect immediately. The partnership follows easyJet's accelerated and successful roll out programme with flight comparison search engine, Dohop, which powers the easyJet worldwide website connecting its European network with longhaul flights. AIESL Trivandrum Facility receives approval from FAA Third Party Maintenance. Leonardo receives contract for 32 TH-73A helicopters by US Department of Defence News In Brief. 15 January 2020: Leonardo has received a firm-fixed-price contract for the production and delivery of 32 TH-73A helicopters, initial spares, support and dedicated equipment, and specific pilot and maintenance training services. 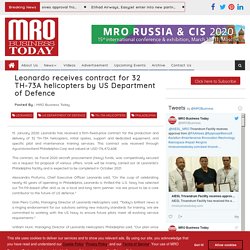 This contract was received through AgustaWestland Philadelphia Corp and valued at USD 176,472,608. This contract, as Fiscal 2020 aircraft procurement (Navy) funds, was competitively secured via a request for proposal of various offers. Work will be mainly carried out at Leonardo's Philadelphia facility and is expected to be completed in October 2021. Alessandro Profumo, Chief Executive Officer Leonardo said, "On the cusp of celebrating nearly 40 years of operating in Philadelphia, Leonardo is thrilled the U.S. Navy has selected our TH-119-based offer and us as a local and long term partner. Matt Baer named Gulfstream’s Regional Vice President Executive Focus Magazine. Aviation Technical Services expands capabilities to include aircraft teardown Third Party Maintenance. Airbus selects Triumph's new Uplock technology for A321XLR programme News In Brief. 15 January 2020: Triumph Group has been chosen by Airbus to supply uplocks for the main landing gear and nose landing gear for its latest A321XLR single-aisle aircraft. 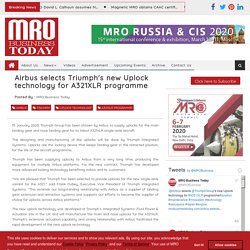 The designing and manufacturing of the uplocks will be done by Triumph Integrated Systems. Uplocks are the locking device that keeps landing gear in the retracted position, for the life of the aircraft programme. Triumph has been supplying uplocks to Airbus from a very long time, producing the equipment for multiple Airbus platforms. For the new contract, Triumph has developed more advanced locking technology benefiting Airbus and its customers. "We are pleased that Triumph has been selected to provide uplocks for the new single-aisle variant for the A321," said Frank Dubey, Executive Vice President of Triumph Integrated Systems.

The new uplock technology was developed at Triumph's Integrated Systems' Fluid Power & Actuation site in the UK and will manufacture the main and nose uplocks for the A321XLR. Aviationscouts GmbH expands its presence in India News In Brief. 14 January 2020: Aviationscouts GmbH has formed a strategic alliance with aircraft cabin specialist AeroChamp Aviation, to support customers more effectively throughout India and the Middle East. 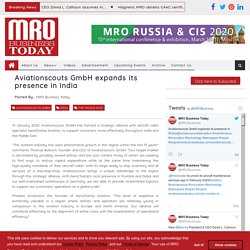 "The aviation industry has seen phenomenal growth in this region within the last 15 years" comments Thomas Bulirsch, founder and CEO of Aviationscouts GmbH. "Our target market is dominated by privately owned airlines and low-cost carriers many of whom are seeking to find ways to reduce capital expenditure while at the same time maintaining the high-quality standards of their aircraft cabin. With its large ready to ship inventory and all services of a one-stop-shop, aviationscouts brings a unique advantage to the region through this strategic alliance. With AeroChamp's local presence in Mumbai and Dubai and our well-maintained warehouses in Germany, we are able to provide streamlined logistics to support our customers' operations on a global scale". MRO Insider to unveil its aircraft maintenance services app in February 2020 News In Brief. 14 January 2020: MRO Insider's mobile app, launching in February 2020 app is all set to offer an efficient, cost saving solution to quickly "ping" AOG, parts, detailing and equipment rental such as hydraulic mules or jack stands from a mobile device or desktop computer.

According to the on live locations of service providers as well as the aircraft, users can compare hourly rates, ETA to the aircraft, reviews, and other pertinent information via push notifications without paying broker fees or finder's fees. The app will work on all devices including iOS, Android, tablets, and desktop computers. Andy Nixon, Co-founder of MRO Insider said, "With the development and launch of our mobile app, business aviation will finally modernise past the phone call and email SOP to connect with service providers. Too many people are taken advantage of in our industry; an owner/operator shouldn't have to pay thousands of dollars to make sure they are covered for one AOG event. GAMA appoints Andre Castro as Director of Communications News In Brief.

14 January 2020: General Aviation Manufacturers Association (GAMA) has appointed Andre Castro as the association's Director of Communications. Andre has more than a decade of experience in strategic communications, media relations and federal policy to GAMA. He has worked in the US House of Representatives as the Communications Director for Congressman Bill Flores of Texas since 2012. While he was working there, he managed the Congressman's national and local media engagement, social media activity and the congressional office's internal and external communications. New Boeing President & CEO David L. Calhoun assumes his role Executive Focus Magazine. 14 January 2020: David L. Calhoun has undertaken the role of president and chief executive officer of The Boeing Company.

"With deep industry experience and a proven track record of performance, Dave is the right leader to navigate Boeing through this challenging time in our 104-year legacy," said Lawrence W. Kellner, chairman of the Boeing Board of Directors. "We're confident Dave will take Boeing forward with intense focus on our values, including safety, quality and integrity. " "We also want to thank Greg Smith for his leadership as interim CEO and are pleased Boeing will continue to benefit from his contributions as he returns to the role of Boeing chief financial officer and executive vice president of Enterprise Performance & Strategy," concluded Kellner. "I'm honored to lead the talented people of Boeing as we face our challenges. Chorus adds 34 aircraft on-lease in a record 2019 News In Brief.

14 January 2020: Chorus Aviation Capital ('CAC') has added a total of 34 aircraft on-lease in 2019. The third-party lease portfolio of CAC has currently reached 641 aircraft. Year-end, and previously unannounced transactions, consist of the acquisition of two mid-life Dash 8- 400 aircraft (MSNs 4300 and 4301) on lease to Croatia Airlines, and an additional sale leaseback of two new ATR 72-600 aircraft (MSNs 1545 and 1552) with IndiGo. Also, CAC has extended its lease agreements with Aerolitoral, S.A. de C.V.

The company will receive the FAA approval to overhaul landing gear for the Airbus A320 family of aircraft in coming months. "We are committed to providing our customers with a full suite of products and services, and FAA approval to overhaul landing gear used on widely popular commercial aircraft is yet another example of the broad range of integrated aircraft solutions and technical capabilities we offer," said Nicolas Finazzo, Chairman & Chief Executive Officer of AerSale. "Our goal is to provide our customers with a convenient, cost effective, and quality one-stop shop to service their needs. " "We worked very hard to obtain this approval," added Dean Vitale, AerSale Component Solutions General Manager.

The annual contract funds critical sustainment activities for aircraft presently in the fleet and builds enterprise capacity to support the future fleet of over 3,000 F-35 aircraft. This consists of industry sustainment experts supporting base and depot maintenance, pilot and maintainer training, and sustaining engineering across the globe. Citation Longitude enters the NetJets fleet Aircraft Manufacturers.

Alaska Air Group names ShaneTackett as CFO News In Brief. 7 January 2020: Alaska Air Group has appointed Shane Tackett as the Chief Financial Officer. He is currently the Executive Vice President of planning and strategy of Alaska. Charles Wemaere named Vice President, Worldwide Spares of Dassault Aviation Executive Focus Magazine. 7 January 2019: Charles Wemaere has been appointed as Vice President, Worldwide Spares of Dassault Aviation. In this new role, he will be responsible for spare parts strategy and logistics efforts for the global Falcon fleet.