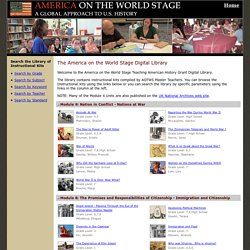 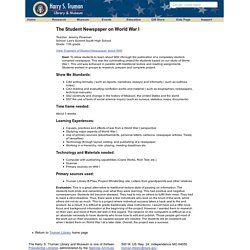 This was the culminating project for students based on our study of World War I. This unit was achieved in parallel with traditional lecture and reading assignments. Students worked in groups to research, prepare and complete project. The July Crisis: Can You Stop The Great War? "The lamps are going out all over Europe. 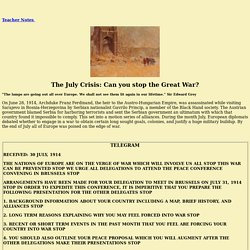 We shall not see them lit again in our lifetime. " Sir Edward Grey On June 28, 1914, Archduke Franz Ferdinand, the heir to the Austro-Hungarian Empire, was assassinated while visiting Sarajevo in Bosnia-Herzegovina by Serbian nationalist Gavrilo Princip, a member of the Black Hand society. The Austrian government blamed Serbia for harboring terrorists and sent the Serbian government an ultimatum with which that country found it impossible to comply. 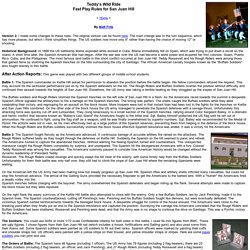 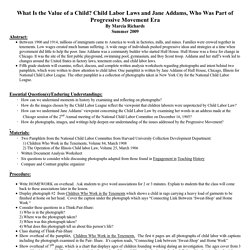 Child Labor Laws and Jane Addams, Who Was Part of Progressive Movement Era By Marcia Richards Summer 2009. 2. Jacob Riis. Dana Mejías Teacher San Diego, CA /upload/Mejias.jpg I am a middle school teacher in San Diego and was fortunate enough to a SHEG workshop in 2008.... 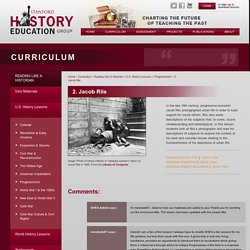 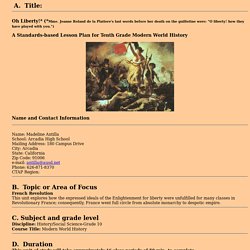 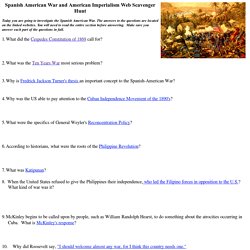 The answers to the questions are located on the linked websites. You will need to read the entire section before answering. Make sure you answer each part of the questions in full. Past/Present. Past/Present reconstructs a fictional mill town and its political and economic issues in 1906. 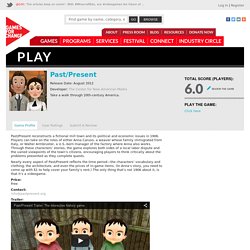 Players can take on the roles of either Anna Caruso, a weaver whose family immigrated from Italy, or Walter Armbruster, a U.S. Unit 14: The Progressive Era. Introduce the Progressive Era to your class by asking them this question, How do you measure progress in your life or more specifically, in a school subject? 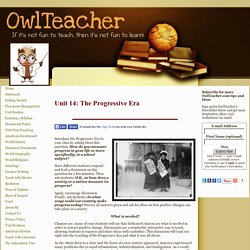 Have different students respond and lead a discussion on this question for a few minutes. Then ask students, O.K., so how does a society or a nation measure its progress? Again, encourage discussion. Finally, ask students, In what ways could our country make progress today? Discuss all answers given and ask for ideas on how positive changes can take place in a society. What is needed? Chances are, many of your students will say that dedicated citizens are what is needed in order to extract positive change. The Progressive Era. Access primary sources, activities, instructional tips, and assessments for a unit on the Progressive Era.

Review This unit on the Progressive Era consists of seven teaching activities, which build upon each other and culminate in an optional service learning project exploring modern day progressivism. Each part of the unit can be downloaded as an individual PDF, or the entirety can be downloaded at once. Overall, the complete package is age-appropriate, while also challenging students to develop historical thinking skills. Activities 3, 4, and 5 utilize primary source documents and photographs, and ask students to analyze documents and draw conclusions from them. Gilded Age & Progressive Era - FREE American History Lesson Plans & Games for Kids. Unit *4: The Progressive Era. Day One: (01) Topic(s): 1. Previewing the Progressive Era Essential Question(s): 1. Activity(ies): 1. VIDEO #1: (TO WATCH) Free Lesson Plans and Games for Learning Civics. The Gilded Age. Gilded Age Web Sites Richest Man in the World: Andrew Carnegie Andrew Carnegie’s legacy is that of a hard-driving Gilded Age business tycoon and generous philanthropist.

A companion to the PBS American experience video series, this site on Carnegie and his times includes an introduction to the era, a timeline, a teacher’s guide, photos and cartoons, a bibliography, a look at the Homestead strike, and links to relevant sites. Unique features include a virtual tour of a Newport mansion, and an activity where you learn what it took to get a grant from Carnegie. Procedure - African American Identity in the Gilded Age - Lesson Plan. Back to Lesson Plans. Exhibition. 13. On the School Bus: Martinsburg, Indiana, 1939 14. Suburban Strip: Sandy Boulevard, Portland, Oregon, 1949 15. City and Suburb: Chicago and Park Forest, Illinois, 1950s 16. 17. The Power of Oratory in the United States. The Authentic History Center.

Music for Teaching History. Industrial Revolution. The Urban Game. Industrial Revolution. Login. The Best of the Humanities on the Web. History & Social Studies Back to School: History, Social Studies, and Philosophy for the Common Core Social Studies/History for Back to School includes Philosophy resources and helps secondary-level teachers respond to the CCSS requirements. Prentice Hall AHON 09. A Reconstruction-era lithograph depicts former enslaved African Americans who were elected to the national and state senates Courtesy Library of Congress Your Visual Preview Explore the chapter's Essential Question.

The United States, which as a young country was especially suceptible to peer pressure, followed along and snapped up some colonies of its own.