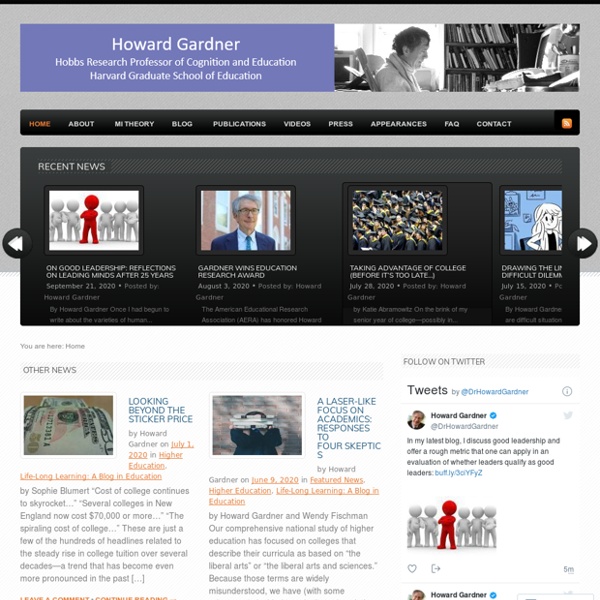 Howard Gardner on His Theory of Multiple Intelligences and Lessons for COVID-19 Era The education world gets obsessed sometimes with trying to come up with ways to measure smarts. But today we’re talking with someone who has a history of shaking up the narrative when it comes to talking about intelligence. It’s Howard Gardner, best known for his theory of Multiple Intelligences (MI). He released this idea decades ago, and it was controversial. His insight was that using a single number like IQ to assess the human brain just doesn't make sense considering how the mind works.

Emotional Intelligence - Daniel Goleman In 1990, in my role as a science reporter at The New York Times, I chanced upon an article in a small academic journal by two psychologists, John Mayer, now at the University of New Hampshire, and Yale’s Peter Salovey. Mayer and Salovey offered the first formulation of a concept they called “emotional intelligence.” Those were days when the preeminence of IQ as the standard of excellence in life was unquestioned; a debate raged over whether it was set in our genes or due to experience. But here, suddenly, was a new way of thinking about the ingredients of life success. I was electrified by the notion, which I made the title of this book in 1995. Howard Gardner, Five Minds for the Future Howard Gardner, Five Minds for the Future Howard Gardner, professor of cognition and education at Harvard Graduate School of Education (the Multiple Intelligences Guy) argues that in our rapidly changing world, the following five minds, encapsulating skills, values, attitudes and knowledge, are crucial. The Disciplined MindThe Synthesizing MindThe Respectful MindThe Creating MindThe Ethical Mind

The Complete Guide to the Alexander Technique - Who was F. Matthias Alexander? Who Was Frederick Matthias Alexander? F.M. Alexander (1869-1955) was an Australian actor who began to experience chronic laryngitis whenever he performed. When his doctors could not help him, Alexander discovered a solution on his own. How Helping Students to Ask Better Questions Can Transform Classrooms To get started with the QFT, first give students time to develop as many questions as they can, with the instruction not to worry if it’s a “good or bad” question. The only requirement is that they be questions, not statements. After the initial fast brainstorm, talk about the difference between closed and open questions, discussing the advantages and disadvantages of both. Then ask students to categorize their questions as “open” or “closed.” The next step is to ask students to change some of their questions from open to closed and vice versa. “It’s in the working with the questions that something happens,” said Rothstein, co-director of The Right Question Institute, during a session at the Building Learning Communities conference.

Effective Thinking Skills Course - The Edward de Bono online course in Thinking The Online de Bono Thinking Skills Course At last! A distributed on-line learning course designed by Edward de Bono. The course is divided into three parts or modules that teach the powerful thinking tools and creativity techniques developed by Dr. de Bono. The aim of this course is to train people in thinking and to give them 'self esteem' in their ability to think. New Modes of Learning The temporary shift to distance schooling can be a time for both parents and teachers to reshape their understanding of what learning can be, says Professor Jal Mehta. As John Dewey famously theorized, education is about “linking the growing web of knowledge in a child’s head with a growing web of knowledge in the world. That means that almost anything can be an opportunity for learning,” says Mehta, whose research explores the benefits of deeper learning. “My suggestion is to look for activities that are fun but have educational value.”

The Power of an Open Mind — MI Oasis Howard Gardner was recently interviewed about MI theory in today’s world – one in which many of the old structures of work and education are breaking down. The following article by Annette MacKenzie will appear in World Magazine. Harvard professor Howard Gardner has spent a lifetime understanding the way we learn and think – but one of his most important lessons is about the importance of keeping an open mind. The list of academic awards on developmental psychologist Professor Howard Gardner’s CV is long, very long. From the MacArthur “Genius” Fellowship in 1981, through 31 honorary degrees to more recent awards highlighting his role as an influential thinker in a number of fields, including business and ethics. The John H. and Elisabeth A.

The Role of Metacognition in Learning and Achievement To illustrate the value of metacognition and how it actually plays a role in learning, we can consider an example from mathematics, where it has been shown that metacognition plays a central role in learning and achievement. Specifically, when novice students were compared to seasoned mathematicians, the students selected a seemingly useful strategy and continued to apply it without checking to see if the strategy of choice was actually working well. Thus, a significant amount of time was wasted in fruitless pursuits. The more experienced mathematicians on the other hand, exercised metacognition, monitoring their approach all along the way to see if it was actually leading to a solution or merely to a dead end.

How 'Slow Looking' Can Help Students Develop Skills Across Disciplines Eight seconds — that’s the latest estimate of the length of the human attention span. The push to cover more material in the same amount of classroom time also provides a challenge, especially when teachers are told that the skills (like critical thinking and creativity) their students will need in order to compete in the 21st century are ones that take time to develop. For educators working with a new generation raised in a world of rapid information exchange, it may seem difficult to hold students’ attention when it comes time for extended observation. As an antidote, Project Zero researcher Shari Tishman offers “slow looking" — the practice of observing detail over time to move beyond a first impression and create a more immersive experience with a text, an idea, a piece of art, or any other kind of object. It’s a practice that clears a space for students to hold and appreciate the richness of the world we live in. How "Slow Looking" Can Support Students

Turning Your Students Into Web Detectives Our students use the web every day—shouldn’t we expect them to do better at interpreting what they read there? Perhaps, but not necessarily. Often, stereotypes about kids and technology can get in the way of what’s at stake in today’s complex media landscape. Sure, our students probably joined Snapchat faster than we could say “Face Swap,” but that doesn’t mean they’re any better at interpreting what they see in the news and online.

How can you change from a fixed mindset to a growth mindset? Step1. Learn to hear your fixed mindset “voice.” As you approach a challenge, that voice might say to you “Are you sure you can do it? Maybe you don’t have the talent.” “What if you fail—you’ll be a failure” “People will laugh at you for thinking you had talent.” “If you don’t try, you can protect yourself and keep your dignity.”