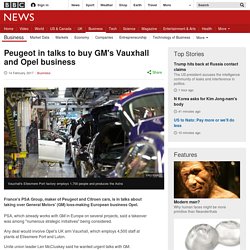 PSA, which already works with GM in Europe on several projects, said a takeover was among "numerous strategic initiatives" being considered. Any deal would involve Opel's UK arm Vauxhall, which employs 4,500 staff at plants at Ellesmere Port and Luton. Unite union leader Len McCluskey said he wanted urgent talks with GM. "My priority now is to speak to General Motors to seek immediate assurances for the UK plants and this loyal workforce. "I'll also be seeking urgent conversations with the government, because everything must be done to secure our world-class automotive industry," he said. In addition to the employees at Vauxhall's manufacturing sites, the company said that 23,000 people worked in the retail network and 7,000 in its UK supply chain. 'Potential acquisition' 'Really disappointed'

3.9.1 Tesco acquires Booker to become UK biggest food… 3.9.1 What is Facebook exactly? Zuckerberg's archived… 3.9.1 Why do businesses grow? There are many reasons that help to explain the motivations for businesses to grow 1. 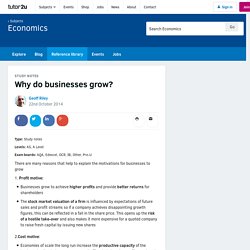 Profit motive: Businesses grow to achieve higher profits and provide better returns for shareholders The stock market valuation of a firm is influenced by expectations of future sales and profit streams so if a company achieves disappointing growth figures, this can be reflected in a fall in the share price. This opens up the risk of a hostile take-over and also makes it more expensive for a quoted company to raise fresh capital by issuing new shares 2.Cost motive: Economies of scale the long run increase the productive capacity of the business leading to lower average costs. 3.Market power motive: Firms may wish to increase market dominance giving them increased pricing power This market power can be used as a barrier to the entry of new businesses in the long run Larger businesses can build and take advantage of buying power (monopsony power) 3.9.1 A Disastrous Takeover for Toshiba. 3.9.1 - Horizontal Integration on The Menu as Just East Swallows Hungry House.

A fascinating takeover was announced at the end of 2016 which, if it is cleared by the competition regulators, will significantly change the nature of competition in the UK takeaway ordering market. 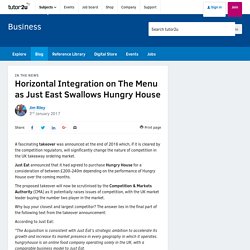 Just Eat announced that it had agreed to purchase Hungry House for a consideration of between £200-240m depending on the performance of Hungry House over the coming months. The proposed takeover will now be scrutinised by the Competition & Markets Authority (CMA) as it potentially raises issues of competition, with the UK market leader buying the number two player in the market. Why buy your closest and largest competitor? The answer lies in the final part of the following text from the takeover announcement: According to Just Eat: 3.9.1 Takeover Strategy: Can Wimpy Move Upmarket with GBK Takeover? 3.9.1 More Retrenchment as Panasonic Tries to Stem the Losses.

Panasonic, like several other Japanese electronics firms (including our blog favourite Sony), appears to be in deep trouble. 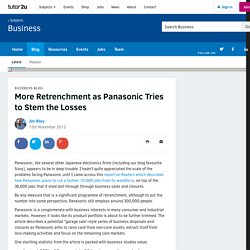 I hadn't quite appreciated the scale of the problems facing Panasonic until I came across this report on Reuters which describes how Panasonic plans to cut a further 10,000 jobs from its workforce, on top of the 36,000 jobs that it shed last through through business sales and closures. By any measure that is a significant programme of retrenchment, although to put the number into some perspective, Panasonic still employs around 300,000 people.

Panasonic is a conglomerate with business interests in many consumer and industrial markets. However, it looks like its product portfolio is about to be further trimmed. The article describes a potential "garage sale'-style series of business disposals and closures as Panasonic aims to raise cash from non-core assets, extract itself from loss-making activities and focus on the remaining core markets. 3.9.1 HCM DW Fitness First Takeover. 3.9.1 Strategy After the Takeover: DW Fitness and Fitness. 3.9.1 Google and GSK form venture to develop bioelectronic medicines. GlaxoSmithKline has teamed up with Google’s parent company Alphabet to develop miniature electronic implants for the treatment of asthma, diabetes and other chronic conditions. 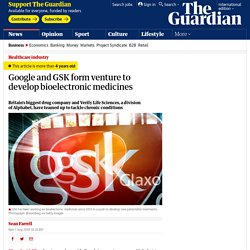 GSK, Britain’s biggest drug company, said it would form a joint venture with Verily Life Sciences, a division of Alphabet, to work on research into bioelectronic medicines. GSK will own 55% of Galvani Bioelectronics, and Verily will hold 45%. Galvani will be based at GSK’s global research and development centre at Stevenage, Hertfordshire, just north of London, and will have a second research hub at Verily’s base in San Francisco. The companies will combine their existing intellectual property rights and invest up to £540m over seven years if the collaboration meets certain goals. 3.9.1 Frankie & Benny’s owner closes 33 restaurants. The company behind Frankie & Benny’s, Chiquito, Coast to Coast and Garfunkel’s is closing 33 restaurants after reporting falling sales and profits. 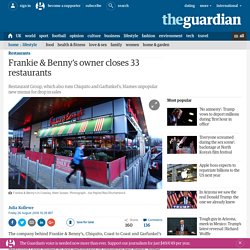 Restaurant Group blamed its poor performance on unpopular new menus, higher prices and poor customer service, and said it would listen more to its customers in the future. 3 9 1 Causes of Change Retrenchment. 3.9.1 Jamie Oliver to close six restaurants in tough market; after Brexit vote. Jamie Oliver is to close six of his Italian restaurants after tough trading and the “pressures and unknowns” following the Brexit vote. 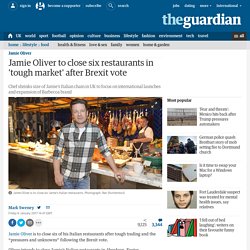 Oliver intends to close Jamie’s Italian restaurants in Aberdeen, Exeter, Cheltenham, Richmond, Tunbridge Wells and Ludgate Hill, near London’s St Paul’s Cathedral, by the end of the first quarter of the year. “As every restaurant owner knows, this is a tough market and post-Brexit the pressures and unknowns have made it even harder,” said Simon Blagden, chief executive of the Jamie Oliver Restaurant Group. The closures will affect about 120 employees, less than 5% of the restaurant chain’s total staff, and the company aims to offer them alternative jobs at other Jamie’s Italian outlets.

“These closures are in no way a reflection on the dedication and commitment of our staff and my first priority is to try and secure those affected alternative jobs,” said Blagden. “Where this isn’t possible, we’ll be working with them to find alternative employment.” 3.9.1 - More Focus and Retrenchment from Dave Lewis at Tesco. 3.9.1 - Retrenchment for Macys. 3.9.1 - John Lewis takes the low risk approach to international growth. John Lewis is set to expand into the Australian market, with plans to launch six concessions in department store chain Myer by 2017. 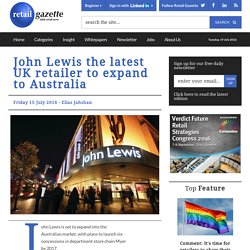 It is anticipated the UK retail giant will open its first shop-in-shop before Christmas in Myer's new Warringah estate in Sydney's northern beaches district. John Lewis will then expand to Melbourne, Perth, Bondi in Sydney's east, Chadstone in Melbourne's south-east and in downtown Sydney by early 2017. The Australian expansion would bring the number of John Lewis concessions to 30 worldwide. ”We’re delighted to be expanding our international presence and bringing John Lewis to new countries around the world, both through physical collaborations and by expanding our online international delivery destinations," head of international development Katie Jordan said. Keep up to date with Retail Gazette by liking us on Facebook John Lewis first expanded into Europe last year, opening a concession in Dutch department store chain de Bijenkorf. 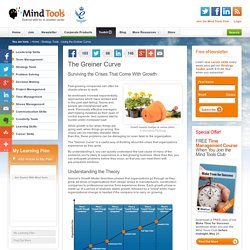 As workloads increase exponentially, approaches which have worked well in the past start failing. 3.9.1 What is overtrading? - Small Business. Overtrading takes place when a business accepts work and tries to complete it, but finds that fulfilment requires greater resources of people, working capital or net assets than are available. 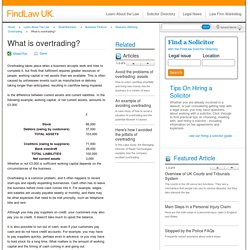 This is often caused by unforeseen events such as manufacture or delivery taking longer than anticipated, resulting in cashflow being impaired. is the difference between current assets and current liabilities. In the following example, working capital, or net current assets, amounts to £3,000. Whether or not £3,000 is sufficient working capital depends on the circumstances of the business. Overtrading is a common problem, and it often happens to recent start-ups and rapidly expanding businesses. Although you may pay suppliers on credit, your customers may also pay you on credit. It is also possible to run out of cash, even if your customers pay cash and do not have credit accounts. 3.9.1 Christmas cheer for gin distillers. 3.9.2 Apple Watch: Will anyone want one? 3.9.2 Apple sues Samsung for $2bn as tech rivals head back to court. The smartphone world's fiercest rivalry is heading back to court again this week in the heart of the Silicon Valley, as Apple and Samsung begin a new trial - accusing each other, once again, of ripping off designs and features.

The trial will mark the latest round in a long-running series of lawsuits between the two tech giants that underscore a much larger concern about what is allowed to be patented. Like the previous trial, held in summer 2012, the new one will be overseen by Judge Lucy Koh in the California district court in San Jose. Samsung is appealing against that verdict, where a jury found in Apple's favour on every count, though reducing its damages claim. In the new trial Apple is seeking damages of $2bn, claiming infringement of five patents by Samsung devices sold in the US between 2010 and 2012, including Galaxy smartphones and tablets. Samsung is claiming infringement of two of its patents by the iPhone and iPad. . • No, Samsung didn't pay Apple its fine in nickels. 3.9.3 - China Leads the Way in Electric Vehicles & Video.

3.9.3 International Markets making and selling cars in India. 3.9.3 Bartlett & Ghoshal International Strategies. Bartlett and Ghoshal (1991) identified four distinct types of multinational corporations (MNCs), which are depicted in the image at the end of this article. These four types can be seen to illustrate, which strategic outlook MNCs have towards managing their subsidiaries, and how these MNCs balance the potential needs of global integration and global differentiation.

Bartlett and Ghoshal (1991) added a third force to this framework: "forces for world-wide innovation". 3.9.3 Lego copycats fool China boss. 3.9.3 - Brexit vote fails to put brake on bike company's new Welsh factory - Reshoring. Britain’s manufacturers were only just recovering from the last downturn when the Brexit vote dealt a fresh blow to confidence, and the early signs are that the mere prospect of leaving the EU has hit demand for goods rolling off British production lines.

Brave timing then for anyone to open a new factory, but that is just what a small British bike manufacturer has done. From this month, brightly coloured children’s Frog Bikes destined for stores around the UK and the rest of the world will be painstakingly assembled from 120 parts, packed up and shipped out from a brand new factory in Pontypool, south Wales. Until now, the bikes have been assembled in China using components from around the world. Now the company is “reshoring”, following the lead of other manufacturers in moving the bulk of their production back to the UK to get better control over lead times and quality.