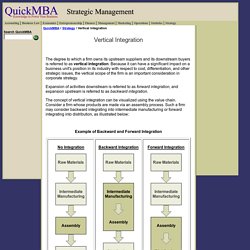 Because it can have a significant impact on a business unit's position in its industry with respect to cost, differentiation, and other strategic issues, the vertical scope of the firm is an important consideration in corporate strategy. Expansion of activities downstream is referred to as forward integration, and expansion upstream is referred to as backward integration. The concept of vertical integration can be visualized using the value chain. Example of Backward and Forward Integration Two issues that should be considered when deciding whether to vertically integrate is cost and control. The following benefits and drawbacks consider these issues. 3.4.5 Managing inventory and supply chains – Worksheet. 3.4.5 An iPhone’s Journey, From the Factory Floor to the Retail Store. (And Why the Product Costs More in China) Image The iPhone is Apple’s most profitable and best-selling product. 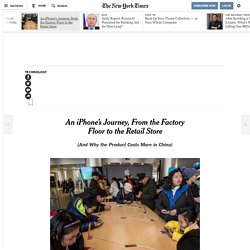 More than a billion have been sold since the first one was released. About half of all iPhones now are made in a huge manufacturing facility in the central Chinese city of Zhengzhou. This is the story of how an iPhone made there can end up in your hands. Getting the Parts Components from more than 200 suppliers go into each iPhone. Apple buys many of the components for iPhones — like the memory chip, the modem, the camera module, the microphone and the touch-screen controller — from more than 200 suppliers around the world. Apple orders many of the components from global suppliers, and then sells them, en masse, to one of its contract manufacturers based in China. Building the Phones Roughly 350 iPhones can be produced each minute in the factory.

Foxconn’s facilities in Zhengzhou cover 2.2 square miles and can employ up to 350,000 workers, many of whom earn about $1.90 an hour. 3.4.5 Supply Chain Moves Centre Stage. Time was when the supply chain was the Cinderella of retail departments. 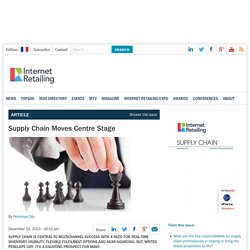 It was rare to find supply-chain representation at board level. Responsibility was often lumped together with IT and regarded by the ‘real’ retailers – working in trading departments such as store operations, merchandisers, or buyers – as little more than a service function. Today the story is very different. A study, Supply Chain Strategy in the Boardroom – the Reality, by consultants Solving Efeso and Cranfield School of Management found that in around three-quarters of the businesses questioned, the senior supply chain executive was now a board member.

3 4 5 – Stock control stock control charts Worksheet. 3.4.4 Aldi is successful because it copies top brands and often improves quality. Sales for supermarket up 32 per cent year on year and 500th store in Britain now open - with another 50 on their way, many in affluent areas One in three households visit Aldi at least once a month, research claimsProducts often praised - with its Christmas puddings beating Harrods' and Heston's offerings in blind-taste tests by the Good Housekeeping Institute45 per cent of goods are produced in Britain and by same people who supply other leading supermarkets By Anne Shooter for the Daily Mail Published: 22:05 GMT, 15 November 2013 | Updated: 01:53 GMT, 16 November 2013. 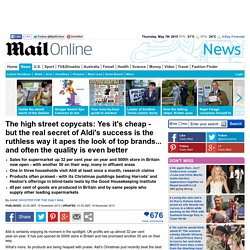 3 4 4 Quality Assurance Worksheet. 3.4.4 Quality - Say it with Flowers within Two Hours. 3.4.4 Samsung Recalls the Flagship Galaxy Note 7 - Just Weeks After Launch. 3.4.3 - Lean Production (Introduction) Lean production is an approach to management that focuses on cutting out waste, whilst ensuring quality. 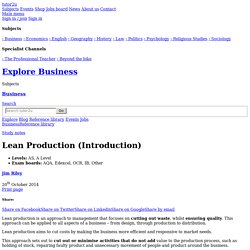 This approach can be applied to all aspects of a business – from design, through production to distribution. Lean production aims to cut costs by making the business more efficient and responsive to market needs. This approach sets out to cut out or minimise activities that do not add value to the production process, such as holding of stock, repairing faulty product and unnecessary movement of people and product around the business. Lean production originated in the manufacturing plants of Japan, but has now been adopted well beyond large and sophisticated manufacturing activities.

The lean approach to managing operations is really about: Doing the simple things wellDoing things betterInvolving employees in the continuous process of improvement…and as a result, avoiding waste Why? Less waste therefore means lower costs, which is an essential part of any business being competitive. 3.4.3 - Time-based management. 3 4 3 Just In Time Handout. 3.4.2 Capacity Utilisation Test. 3.4.1 Capacity utilisation calculation. Here’s a topical example of capacity utilisation in action… 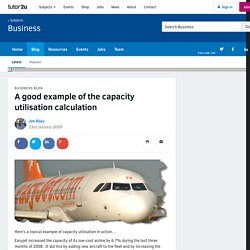 3.4.1 - EasyJet and Capacity Utilisation: Too Many Passengers. The costs of operating an airline are largely fixed. 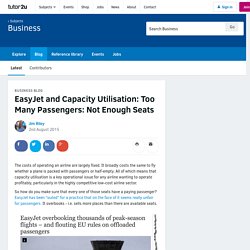 It broadly costs the same to fly whether a plane is packed with passengers or half-empty. All of which means that capacity utilisation is a key operational issue for any airline wanting to operate profitably, particularly in the highly competitive low-cost airline sector. So how do you make sure that every one of those seats have a paying passenger? EasyJet has been "outed" for a practice that on the face of it seems really unfair for passengers. It overbooks - i.e. sells more places than there are available seats.

The Independent reports several recent examples where EasyJet passengers have arrived at check-in having bought a ticket - only to be told they can't fly! Why are EasyJet trying to get away with overbooking? In the airline industry, capacity utilisation is know as "load factor" - the proportion of seats which are actually occupied by paying passengers. The problems arrive when more passengers turn up than expected?