Understanding Disease at the Organelle Level: created with Zunal WebQuest Maker. Task 2: Investigate the connections between dysfunctional organelles and disease. 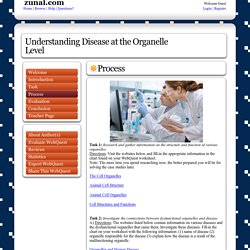 A) Directions: The websites listed below contain information on various diseases and the dysfunctional organelles that cause them. Investigate these diseases. Hereditary elliptocytosis. Hereditary elliptocytosis, also known as ovalocytosis, is an inherited blood disorder in which an abnormally large number of the patient's erythrocytes (i.e. red blood cells) are elliptical rather than the typical biconcave disc shape. 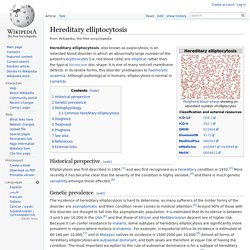 It is one of many red-cell membrane defects. In its severe forms, this disorder predisposes to haemolytic anaemia. Although pathological in humans, elliptocytosis is normal in camelids. Mitochondrial Disease Action Committee - MitoAction. What are Mitochondria? 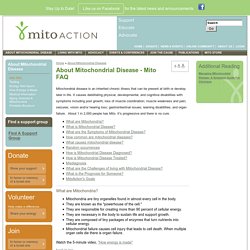 Mitochondria are tiny organelles found in almost every cell in the body.They are known as the "powerhouse of the cell. "They are responsible for creating more than 90 percent of cellular energy.They are necessary in the body to sustain life and support growth.They are composed of tiny packages of enzymes that turn nutrients into cellular energy.Mitochondrial failure causes cell injury that leads to cell death.

When multiple organ cells die there is organ failure. Watch the 5-minute video, "How energy is made" back to top. What is Fabry Disease? By Sally Robertson, BSc Fabry disease is a rare genetic condition that belongs to a group of disorders referred to as lysosomal storage disease. 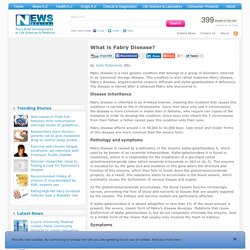 This condition is also called Anderson-Fabry disease, Fabry’s disease, angiokeratoma corporis diffusum and alpha-galactosidase A deficiency. The disease is named after a Johannes Fabry who discovered it. Disease inheritance Fabry disease is inherited in an X-linked manner, meaning the mutation that causes this condition is carried on the X chromosome. Fabry disease affects around 1 in 40,000 to 60,000 boys. Endoplasmic reticulum storage diseases. Plasma membrane cholesterol controls the cytotoxicity of Alzheimer’s disease AβP (1–40) and (1–42) peptides. Abstract Cell degeneration in Alzheimer’s disease is mediated by a toxic mechanism that involves interaction of the AβP peptide with the plasma membrane of the target cell. 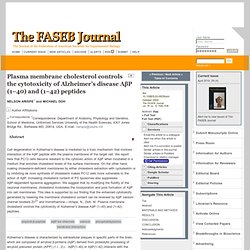 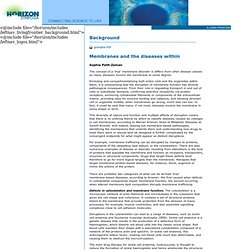 The Journal of Clinical Investigation. Intermediate Filament Diseases: Desminopathy. Centrioles, Centrosomes, and Cilia in Health and Disease. To view the full text, please login as a subscribed user or purchase a subscription. 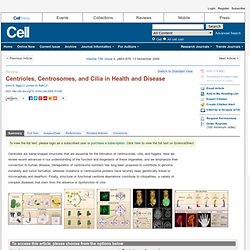 Click here to view the full text on ScienceDirect. Centrioles are barrel-shaped structures that are essential for the formation of centrosomes, cilia, and flagella. Here we review recent advances in our understanding of the function and biogenesis of these organelles, and we emphasize their connection to human disease. Deregulation of centrosome numbers has long been proposed to contribute to genome instability and tumor formation, whereas mutations in centrosomal proteins have recently been genetically linked to microcephaly and dwarfism. Finally, structural or functional centriole aberrations contribute to ciliopathies, a variety of complex diseases that stem from the absence or dysfunction of cilia. Register an Account If you do not have an account, create one by clicking the button below, and take full advantage of this site's features.

Braverman-PCD. Small molecule intervention in microtubule-associated human disease. Parkinson's disease may be caused by microtubule, rather than mitochondrial complex I, dysfunction. Patients with Parkinson's disease (PD) suffer a specific loss of dopaminergic neurons from the midbrain region that controls motor function. 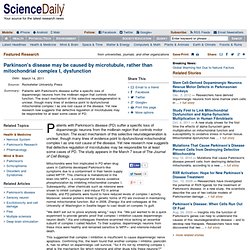 The exact mechanism of this selective neurodegeneration is unclear, though many lines of evidence point to dysfunctional mitochondrial complex I as one root cause of the disease. Yet new research now suggests that defective regulation of microtubules may be responsible for at least some cases of PD. The study appears in the March 7 issue of The Journal of Cell Biology. Mitochondria were first implicated in PD when drug users in California developed Parkinson's-like symptoms due to a contaminant in their heroin supply called MPTP. This chemical is metabolized in the brain into MPP+, a compound that blocks oxidative phosphorylation by inhibiting mitochondrial complex I. "We didn't set out to prove anybody wrong," says Xia.

This suggested that complex I inhibition is insufficient to cause dopaminergic nerve apoptosis. Peroxisomal Disorders. Neuro_Nr-2_2008_Art-6. Diseases of the Nuclear Envelope. When ribosomes go bad: diseases of ribosome biogenesis. Roles of Mitochondria in Health and Disease. Michael R. 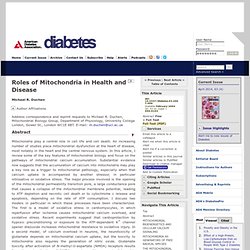 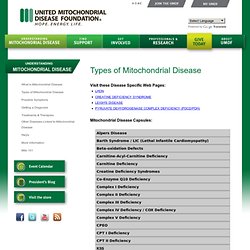 Lysosomal Disease (LD) is a group of approximately 50 rare inherited metabolic storage disorders that result from a malfunction in a specific portion in the body's cells – the lysosome. Some of the forms of LD have therapies that alleviate the disease symptoms but generally they do not have a cure. A new baby is born with a LD every 30 minutes! "Extraordinary Measures", the Harrison Ford produced movie starring Brendan Fraser with Harrison Ford and Keri Russell, which will be released in January 2010, documents the true story of John Crowley, a parent who founded a drug company in his quest to find a cure for Pompe disease (one of the lysosomal diseases) which affects his two daughters.

He founded Amicus Therapeutics and remains their President and CEO. You can learn more about Pompe disease by clicking here and using one the of the links below. The "back story" about Duke University and Dr. Lysosomal Disease Network. Fabry Disease - NCBI Bookshelf. In Alzheimer's disease the Golgi apparatus of a population of neurons without neurofibrillary tangles is fragmented and atrophic. The British Society for Cell Biology. Quick look: Golgi apparatus(or complex, or body, or ‘the ‘Golgi’) is found in all plant and animal cells and is the term given to groups of flattened disc-like structures located close to the endoplasmic reticulum.

The number of ‘Golgi apparatus’ within a cell is variable. Animal cells tend to have fewer and larger Golgi apparatus. Plant cells can contain as many as several hundred smaller versions. The Golgi apparatus receives proteins and lipids (fats) from the rough endoplasmic reticulum. It modifies some of them and sorts, concentrates and packs them into sealed droplets called vesicles.

Destination 1: within the cell, to organelles called lysosomes. The name behind the apparatus The Golgi apparatus is the only cell organelle to be named after a scientist.