Check to see what is happening in Mr. Mielke's classes. A great way to keep in touch if you have to be away.

Social Media. Facebook in Education. EDUCATOR’S GUIDE – Facebook for Educators. Facebook as an Instructional Technology Tool. Can the wildly popular social network be used constructively in the classroom? 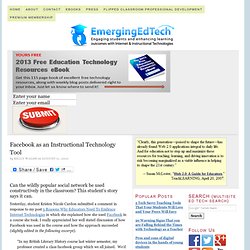 This student’s story says it can. Yesterday, student Kristen Nicole Cardon submitted a comment in response to my post 5 Reasons Why Educators Need To Embrace Internet Technologies in which she explained how she used Facebook in a course she took. 'Fakebook'! Create a Fake Facebook Profile Wall using this generator. PBL physics. 'Hunger Games' Science: Investigating Genetically Engineered Organisms. Overview | What lessons can we learn about genetically engineered organisms from the example of the jabberjay, a fictional bird in the movie “The Hunger Games”? 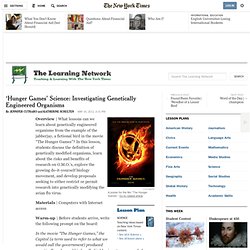 In this lesson, students discuss the definition of genetically modified organisms, learn about the risks and benefits of research on G.M.O.’s, explore the growing do-it-yourself biology movement, and develop proposals seeking to either restrict or permit research into genetically modifying the avian flu virus. Materials | Computers with Internet access Warm-up | Before students arrive, write the following prompt on the board: In the movie “The Hunger Games,” the Capitol (a term used to refer to what we would call the government) produced genetically enhanced birds called jabberjays to spy on rebels. Mrs Bidwell's Science Stuff.