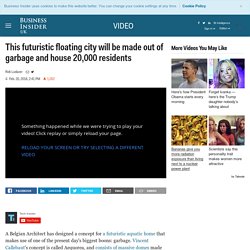 Click replay or simply reload your page. A Belgian Architect has designed a concept for a futuristic aquatic home that makes use of one of the present day's biggest boons: garbage. Vincent Callebaut's concept is called Aequorea, and consists of massive domes made from algae and garbage from the great Pacific garbage patch. Produced by Rob Ludacer. Donald Trump's refugee ban, explained. Trump's immigration ban actually makes it harder to fight terrorism. Obama Immigration Reform 2014 Speech: Announcing Executive Action [FULL] Today on November 20th. Future - What if the internet stopped working for a day? Jeff Hancock likes to give his Stanford University students weekend assignments that let them experience concepts discussed in class for themselves. 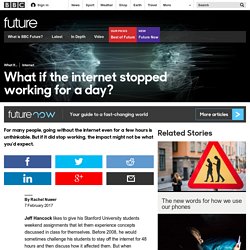 Before 2008, he would sometimes challenge his students to stay off the internet for 48 hours and then discuss how it affected them. But when Hancock returned to work in 2009, after a year-long sabbatical, things had changed. “When I tried to introduce the task, there was a class revolt,” says Hancock, who studies the psychological and social processes involved in online communication. “The students emphatically said the assignment was impossible and unfair.” They argued that going offline even for a weekend would prevent them from completing work in other classes, ruin their social lives, and make their friends and family worry that something terrible had happened to them. But with our always-connected lifestyles, the question is now more relevant than ever: what would happen if the internet stopped for a day? History supports this. Site. Textes officiels et ressources eduscol. Anglais pour le BAC – Tout pour préparer l'épreuve du BAC en anglais.

Site d'Anglais de l'Académie de Grenoble - Didactique. Future - The invisible ways Facebook is affecting our choices. In an age increasingly concerned with software telling us what to think, something more old-fashioned has been in the news: a select group of unaccountable individuals telling us what counts as news. 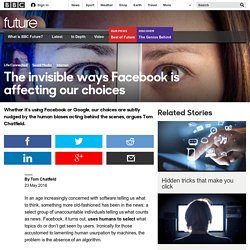 Facebook, it turns out, uses humans to select what topics do or don’t get seen by users. Ironically for those accustomed to lamenting human usurpation by machines, the problem is the absence of an algorithm. The world’s most powerful information-sharing platform is inscrutably able to select what gets seen The most controversial claim to emerge is that the site’s trending topics selections have an anti-conservative bias, disproportionately suppressing conservative news and views (a claim the company has vigorously disputed). When tech site Gizmodo broke the initial story in March, however, it suggested two entwined reasons why Facebook may be embarrassed irrespective of any political bias.

What’s not to like about nudging? It’s not only Facebook who is in the information selection game. Catalogue en ligne Itec-Boisfleury <br> C.D.I. Corenc. CAPTAIN FANTASTIC Trailer (2016)