Um-khonto we Sizwe / MK / Spear of the Nation. In 1910, by an act of British Parliament, the newly established Union of South Mrica became a dominion of the British Empire. 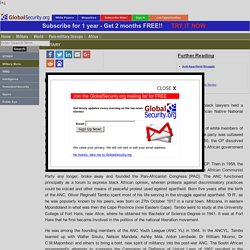 Reacting to legislation and a constitution that virtually guaranteed white dominance, a group of black lawyers held a conference in Bloemfontein on 8 January 1912, from which was born the South Mrican Native National Congress. The name was changed to the African National Congress [ANC] in 1923. The South African Communist Party (CP) came into existence in July 1921 as a result of white members of the Industrial Socialist League joining forces with the International Socialist League. Goede Hoop na #RhodesMustFall - NRC. We zien de achterkant van een hoofd. 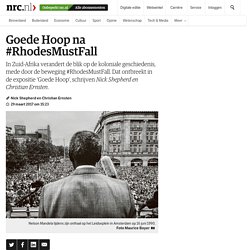 Mandela & Luthuli- Shortfilm Documentary. Nelson Mandela's Life Story. Why Nelson Mandela was on a terrorism watch list in 2008. Nelson Mandela is being remembered across the world (and political spectrum) for his heroic, life-long battle against apartheid and injustice in South Africa. 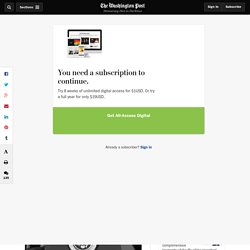 But with all the accolades being thrown around, it’s easy to forget that the U.S., in particular, hasn’t always had such a friendly relationship with Mandela -- and that in fact, as late as 2008, the Nobel Prize winner and former president was still on the U.S. terrorism watch list. When Mandela’s, and the world’s, fate changed at historic Rivonia Trial. For more than four hours he had stood in the dock in a packed, stately, wood-paneled courtroom in Pretoria, the heart of the white apartheid government, and had spoken without pause or interruption about his country and his politics and the reasons he had chosen to become an enemy of the state. 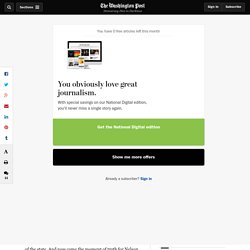 And now came the moment of truth for Nelson Mandela. “During my lifetime,” he intoned, “I have fought against white domination, and I have fought against black domination. I have cherished the ideal of a democratic and free society in which all persons live together in harmony and with equal opportunities.” He raised his head to look squarely at the white judge. “It is an ideal which I hope to live for and to achieve,” he said. Have You Heard From Johannesburg. Nelson Mandela: The Rivonia Trial. Eyewitness accounts of the Sharpeville massacre 1960. Eyewitness accounts of the Sharpeville massacre 1960 The day of the Massacre, mourning the dead and getting over the shock of the event © Baileys African History Archive (BAHA) Tom Petrus, author of 'My Life Struggle', Ravan Press... 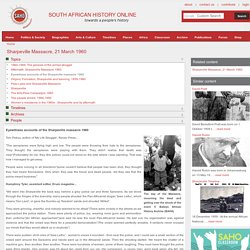 STHP LP Ngoyi old. SAHA / Sunday Times Heritage Project - Home. Apartheid in South Africa - Documentary on Racism. The Black Sash: The Early Years. Author of “The Black Sash” Mary Burton LIVE! Black Sash legacy. Document 9: First letter from Nelson Mandela to Hendrik Verwoerd, 20 April 1961 - The O'Malley Archives. I AM DIRECTED by the All-In African National Action Council to address your Government in the following terms: The All-In African National Action Council was established in terms of a resolution adopted at a conference held at Pietermaritzburg on 25 and 26 March 1961. 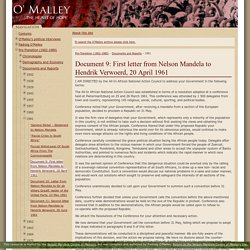 This conference was attended by 1 500 delegates from town and country, representing 145 religious, social, cultural, sporting, and political bodies. Conference noted that your Government, after receiving a mandate from a section of the European population, decided to proclaim a Republic on 31 May. Civil Rights vs Apartheid lesson. Inspirational Nelson Mandela Quotes. By Alistair Boddy-Evans Updated February 09, 2017. 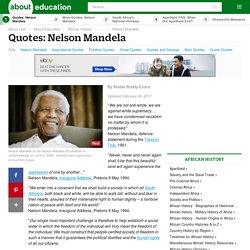 "We are not anti-white, we are against white supremacy … we have condemned racialism no matter by whom it is professed. " Defiance Campaign. Summary The Defiance Campaign in 1952 was the first large-scale, multi-racial political mobilization against apartheid laws under a common leadership – by the African National Congress, South African Indian Congress, and the Coloured People’s Congress. 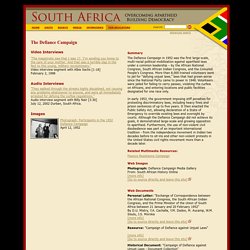 More than 8,000 trained volunteers went to jail for “defying unjust laws,” laws that had grown worse since the National Party came to power in 1948. Volunteers were jailed for failing to carry passes, violating the curfew on Africans, and entering locations and public facilities designated for one race only. Pumla Gobodo-Madikizela (South Africa)- Strike a Woman, Strike a Rock. 12 Songs that Shaped the Struggle (With Lyrics & Translations) Wathint' abafazi, wathint' imbokodo. Comedian Trevor Noah On being mixed race in South Africa. Trevor Noah talks growing up under apartheid Video. Log In - New York Times. I Grew Up in South Africa During Apartheid  Nelson Mandela, a senior member of the African National Congress, in prison on Robben Island. 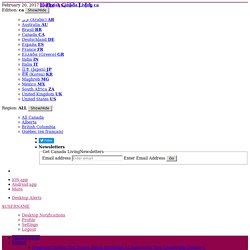 This copy was taken from the family album the original was by Alf Khumalo. Nelson Mandela death: Life under apartheid. Nelson Mandela spent 27 years in prison because of his opposition to the apartheid regime. 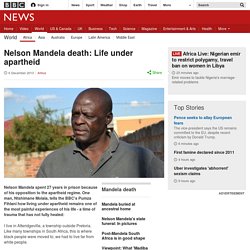 One man, Ntshimane Molala, tells the BBC's Pumza Fihlani how living under apartheid remains one of the most painful experiences of his life - a time of trauma that has not fully healed: I live in Atteridgeville, a township outside Pretoria. Archive - Apartheid in South Africa - Living under racial segregation and discrimination. Twelve Disciples of Nelson Mandela - Living Under Apartheid (1/2) - POV. Language Distribution in South Africa. Xhosa men don't look back in South Africa - vpro Metropolis. SAHA - South African History Archive - You strike the women, you strike the rock!

‘Wathint' Abafazi, Wathint' Imbokodo'(you strike the women, you strike the rock) These words from the famous resistance song have come to symbolise the courage and strength expressed at the Women's March of 1956 as South African women refused to give into increasing oppression without some form of protest. Before the 1950s, only black men were required to carry passes. This gave them permission to be in an urban area. Only people who could find work were given a pass. This allowed the government to control the influx of black men into the cities.

In 1952, the government announced that Black women would also have to carry passes. On the 9th of August 1956, over 20 000 women of all races marched in unison to the Union Buildings in Pretoria to hand over a petition to the then South African prime minister Hans (JG) Strijdom. This was a significant turning point in the struggle against unjust apartheid laws. Exhibitions in the classroom Reading into the past 1. 2. 3.

Learning more. South Africa: Overcoming Apartheid. The activities are designed for students to critically engage with Overcoming Apartheid's unique multimedia materials in order to learn about white supremacy in South Africa and the popular struggle for freedom and equality. The exercises are aimed at high school students, but can be used or easily adapted in undergraduate courses. Worksheets for analyzing historical documents, interviews, and images found on this site are provided. In the supplemental resources area on the left, teachers can find a list of maps, recommended books for further reading, as well as films, videos, and useful websites.

We are eager to hear from you about what educational activities and resources you find particularly useful and other ways you are using this site with your students. Please use this Feedback Form or send an email message to us at: apartheid.matrix@matrix.msu.edu. Nelson Mandela: The Fight for Freedom BBC Full Documentary 2013 Nelson Mandela (1918 - 2013) Apartheid in South Africa Laws, History: Documentary Film - Raw Footage (1957)

Several photographic strategies, from documentary to reportage, social documentary to the photo essay, were each adopted to examine the effects and after-effects of apartheid's political, social, economic, and cultural legacy. Past Tour Venues. International Center of Photography. Success Thanks for subscribing. Join our mailing list. Celebrating 125 Years of Whitworth Apartheid Simulation. In spring 1986, Whitworth students sought to empathize with the plight of blacks in South Africa by holding an apartheid-simulation day on campus.

In a “diary” that was published for Whitworth Today, one of the students wrote, “It’s a big challenge we’ve undertaken – to grasp a complex subject like apartheid from our perspective a hemisphere away from South Africa. Attempting to simulate an apartheid state on a college campus can provide at best only a glimmer of reality. But for a community like Whitworth, with its history of social concern, it seems right to try.” Students organized simulations that required white students to carry identity passes to gain admittance into buildings where security officers were stationed; the students were to observe signs that indicated where white students were allowed to enter. Invictus (2009) Niza.nl. Black Butterflies (2011) - Filminfo. White Slums Of South Africa Full Documentary. Poor white South Africans blame reverse discrimination.

The White Man in That Photo. Sometimes photographs deceive. Take this one, for example. It represents John Carlos and Tommie Smith’s rebellious gesture the day they won medals for the 200 meters at the 1968 Summer Olympics in Mexico City, and it certainly deceived me for a long time. I always saw the photo as a powerful image of two barefoot black men, with their heads bowed, their black-gloved fists in the air while the US National Anthem, “The Star-Spangled Banner,” played.

It was a strong symbolic gesture – taking a stand for African American civil rights in a year of tragedies that included the death of Martin Luther King and Bobby Kennedy. It’s a historic photo of two men of color. Nelson Mandela ESL Lesson Plan And Challenge. Mandela and the Question of Violence - Ta-Nehisi Coates. Nelson Mandela&apos;s legacy: As a leader, he was willing to use violence.

Nelson Mandela Demanded Justice Before Forgiving White South Africans. The Revolutionary - Monitoring Mandela. Nelson Mandela Funeral Memorial. On Sunday 15 December 2013 Nelson Mandela’s funeral was held in his childhood village of Qunu, South Africa. To commemorate the occasion, this visual reflects on a man who, despite tremendous adversity, played an incomparably important role in the struggle for freedom and human dignity worldwide.

Mandela’s so-called “walk to freedom” was never an easy one. It spanned most of his 95-year life, during which he was simultaneously vilified and exalted. Although Mandela’s 27 years in prison are in no way forgotten, we often fail to remember that during those decades, and for many years after, Mandela was also seen by members of the international community as a radical. Power of forgiveness: Apartheid-era cop's memories of Nelson Mandela. The Sabotage Campaign - The O'Malley Archives. Ingrid Jonker, Die Kind. Our_sharpeville.pdf. Our sharpeville-1. Our Sharpeville. Who is Nelson Mandela ? Archive - Apartheid in South Africa - Arena. South Africa: Overcoming Apartheid. South Africa: Overcoming Apartheid. Apartheid and reactions to it. History - Nelson Mandela 1918-2013 (pictures, video, facts & news)

What can Teachers Learn from Nelson Mandela to Make a Difference?