RED BULL BC ONE 10h ANNIVERSARY. Anton corbijn. Beautiful Disney Quotes. Sometimes, the best remedy for your troubles is the perfect Disney quote. 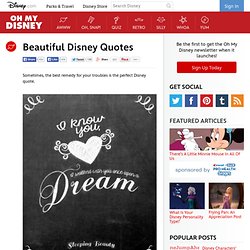 Which one is your favorite? Out The Box - The B-Boy Paint Project (breakdancing) Old.cabincrewticket.co.uk/cabcourse/Recruitment Manual Application Forms.pdf. Wp-content/uploads/2013/02/Table-of-Contents-How-to-Become-a-Flight-Attendant.pdf. Wp-content/uploads/2013/02/Sample-Chapter-How-to-Become-a-Flight-Attendant.pdf. #BBOYING ~ Bboy Story [Unbreakable Crew/Yugoslavian Kids] Star Man, Yuri Gagarin. R16 Cyphers - Dyzee VS. Roxrite VS. Niek VS. Lamine - Funny cypher at the hotel. How Stealth Bombers Work" ­The B-2 bomber, commonly known as the stealth bomber, was an ambitious project, to say the least. 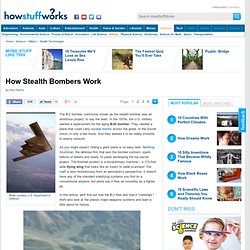 In the 1970s, the U.S. military wanted a replacement for the aging B-52 bomber. They needed a plane that could carry nuclear bombs across the globe, to the Soviet Union, in only a few hours. And they wanted it to be nearly invisible to enemy sensors. As you might expect, hiding a giant plane is no easy task. Northrop Grumman, the defense firm that won the bomber contract, spent billions of dollars and nearly 10 years developing the top secret project. In this article, we'll find out how the B-2 flies and how it "vanishes. 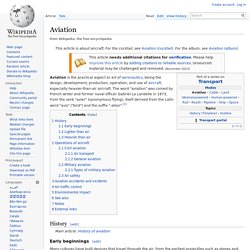 The word "aviation" was coined by French writer and former naval officer Gabriel La Landelle in 1873, from the verb "avier" (synonymous flying), itself derived from the Latin word "avis" ("bird") and the suffix "-ation".[1] History[edit] Early beginnings[edit] Many cultures have built devices that travel through the air, from the earliest projectiles such as stones and spears,[2][3] the boomerang in Australia, the hot air Kongming lantern, and kites. Lighter than air[edit] The modern age of aviation began with the first untethered human lighter-than-air flight on November 21, 1783 of a hot air balloon designed by the Montgolfier brothers. Rigid airships became the first aircraft to transport passengers and cargo over great distances. Fighter aircraft. A fighter aircraft is a military aircraft designed primarily for air-to-air combat against other aircraft,[1] as opposed to bombers and attack aircraft, whose main mission is to attack ground targets. 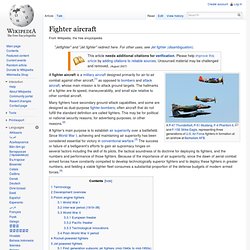 The hallmarks of a fighter are its speed, maneuverability, and small size relative to other combat aircraft. Many fighters have secondary ground-attack capabilities, and some are designed as dual-purpose fighter-bombers; often aircraft that do not fulfill the standard definition are called fighters. This may be for political or national security reasons, for advertising purposes, or other reasons.[2] A fighter's main purpose is to establish air superiority over a battlefield.

Terminology[edit] As a part of military nomenclature, a letter is often assigned to various types of aircraft to indicate their use, along with a number to indicate the specific aircraft. Development overview[edit] With the steady improvements in computers, defensive systems have become increasingly efficient. Mikoyan-Gurevich MiG-23. Mikoyan MiG-29. The Mikoyan MiG-29 ( Russian : Микоян и Гуревич МиГ-29 ; NATO reporting name : "Fulcrum") is a fourth-generation jet fighter aircraft designed in the Soviet Union . 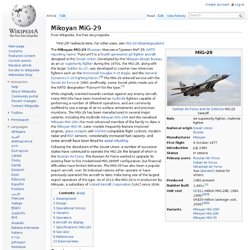 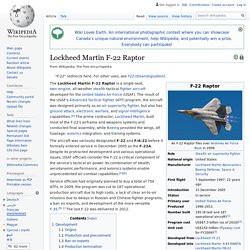 It was designed primarily as an air superiority fighter , but has additional capabilities that include ground attack , electronic warfare , and signals intelligence roles. [ 5 ] Lockheed Martin Aeronautics is the prime contractor and is responsible for the majority of the airframe, weapon systems and final assembly of the F-22. Program partner Boeing Defense, Space & Security provides the wings, aft fuselage, avionics integration, and training systems. Military aircraft. A fighter aircraft and 3 bombers of the World War II era A military aircraft is any fixed-wing or rotary-wing aircraft that is operated by a legal or insurrectionary armed service of any type. [ 1 ] Military aircraft can be either combat or non-combat: Combat aircraft are aircraft designed to destroy enemy equipment using their own armament. [ 1 ] Combat aircraft are normally developed and procured only by military forces. 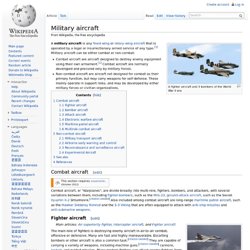 Military aircraft. Airplane. An airplane , aeroplane or simply plane , is a powered fixed-wing aircraft that is propelled forward by thrust from a jet engine or propeller . 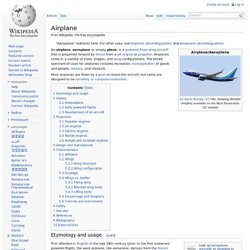 Airplanes come in a variety of sizes, shapes, and wing configurations. The broad spectrum of uses for airplanes includes recreation, transportation of goods and people, military , and research. Most airplanes are flown by a pilot on board the aircraft, but some are designed to be remotely or computer-controlled . Etymology and usage [ edit ] First attested in English in the late 19th century (prior to the first sustained powered flight), the word airplane , like aeroplane , derives from the French aéroplane , which comes from the Greek ἀήρ ( aēr ), "air" [ 1 ] + either Latin planus , "level", [ 2 ] or Greek πλάνος ( planos ), "wandering". [ 3 ] [ 4 ] " Aéroplane " originally referred just to the wing, as it is a plane moving through the air . [ 5 ] In an example of synecdoche , the word for the wing came to refer to the entire aircraft.