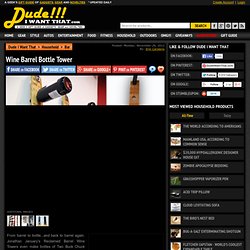 Jonathan January's Reclaimed Barrel Wine Towers even make bottles of Two Buck Chuck look hip and spiffy and like a product that came from actual grapes! The hovering oeno-presentation extends from the stave of a repurposed French wine barrel, and grasps up to five bottles 'round the neck in its neatly drilled holes. Mounting can be done directly over drywall--no stud location necessary--and included decorative mounting screws match the buyer's choice of a matte black or matte raw steel bracket.

The tower measures 40" from end to end. Apparently, storing wine bottles horizontally doesn't just look cool, it serves the purpose of maintaining cork-wine contact, and eliminates the potential for wine oxygenation from the layer of air that would otherwise rest between them. Ice Jacket Bottle Chiller. It's all about the presentation. 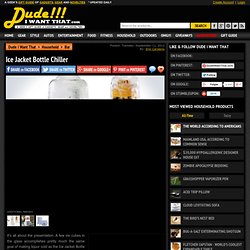 A few ice cubes in the glass accomplishes pretty much the same goal of making liquor cold as the Ice Jacket Bottle Chiller, but the latter just looks so freaking cool ensconcing boozy vessels in shrouds of molded ice. To use, sit your favorite 700 - 750mL bottle of gin, vodka, tequila, or whiskey on the Chiller's base-grip, slide on and clip the polypropylene sleeve to seal, and then make a liquid jacket by filling with water. A 7- to 8-hour stint in the freezer returns a perfectly frosted party in a bottle that will keep contents cold for several hours.

And as the ice melts or drunk people lick it, the Chiller's base will serve as a coaster and catch the drips. Common spirits the Ice Jacket Bottle Chiller accommodates include Plymouth London Dry Gin, Captain Morgan rums, Stolichnaya vodkas, and Black Velvet whiskey. Wooden Palette Drink Coasters. Stone Drink Dispenser Lets You Squeeze Booze From A Stone. Your watermelon keg is fun and all, but you have to admit: it's a lot of hard work to hollow that thing out to turn it into a proper drink dispenser. 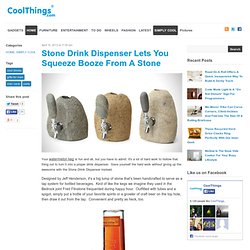 Save yourself the hard work without giving up the awesome with the Stone Drink Dispenser instead. Designed by Jeff Henderson, it's a big lump of stone that's been handcrafted to serve as a tap system for bottled beverages. Kind of like the kegs we imagine they used in the Bedrock joint Fred Flinstone frequented during happy hour. Outfitted with tubes and a spigot, simply put a bottle of your favorite spirits or a growler of craft beer on the top hole, then draw it out from the tap. Convenient and pretty as heck, too. The Stone Drink Dispenser comes in two general styles: found stones that were turned into a proper dispenser with a flat base and rectangular dispensers made from granite blocks. Uncommon Goods has the Stone Drink Dispenser available now, priced at $125. Gin Wheel Is A Lazy Susan For Your Drink-Mixing Supplies.

Your wife has laid down her verdict: a big fat "no" to the mini-bar in the living room proposal you filed last night while you were talking in bed. 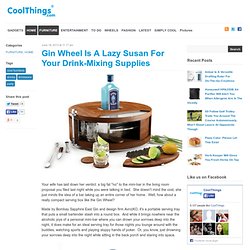 She doesn't mind the cost, she just minds the idea of a bar taking up an entire corner of her home. Well, how about a really compact serving box like the Gin Wheel? Made by Bombay Sapphire East Gin and design firm Avro|KO, it's a portable serving tray that puts a small bartender stash into a round box. And while it brings nowhere near the alcoholic joys of a personal mini-bar where you can drown your sorrows deep into the night, it does make for an ideal serving tray for those nights you lounge around with the buddies, watching sports and playing sloppy hands of poker.

Or, you know, just drowning your sorrows deep into the night while sitting in the back porch and staring into space. The Gin Wheel is, basically, a Lazy Susan turntable for alcohol libations. You can purchase the Gin Wheel from Future Perfect, priced at $500. Dropcatch Catches Your Beer Caps Using Magnets. We don't know why mankind continues to obsess over bottle openers. 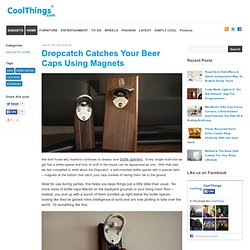 Every single multi-tool we get has a bottle opener and tons of stuff in the house can be repurposed as one. With that said, we feel compelled to write about the Dropcatch, a wall-mounted bottle opener with a special twist -- magnets at the bottom that catch your caps instead of having them fall to the ground. Ideal for use during parties, this helps you keep things just a little tidier than usual. No more mess of bottle caps littered on the backyard grounds or your living room floor -- instead, you end up with a bunch of them bundled up right below the bottle opener, looking like they've gained robot intelligence of sorts and are now plotting to take over the world.

Or something like that. Stact Wine Wall: Modular Wall-Mounted Wine Storage. Those Concrete Wine Bunkers are awesome for setting up a modular storage system for your growing wine collection. 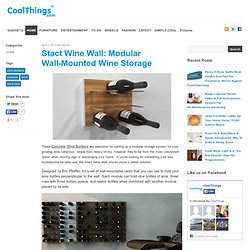 Made from heavy bricks, however, they're far from the most convenient option when moving digs or rearranging your home. If you're looking for something a lot less troublesome for later use, the Stact Wine Wall should prove a better solution. Designed by Eric Pfeiffer, it's a set of wall-mountable racks that you can use to hold your wine bottles perpendicular to the wall. Each module can hold nine bottles of wine, three rows with three bottles apiece, and twelve bottles when combined with another module placed by its side. Every Stact Wine Wall module consists of a 36.5 x 28.8 cm (w x h) board and nine support bars measuring 18.8 cm long. While you can, of course, lay these across your basement walls, the minimalist but decorative design should make them plenty sweet for practically any part of the house. Concrete Wine Bunkers Give You Modular Wine Storage.

When you stock up on fine wine at home, it pays to invest in proper wine storage. 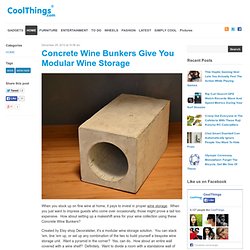 When you just want to impress guests who come over occasionally, those might prove a tad too expensive.