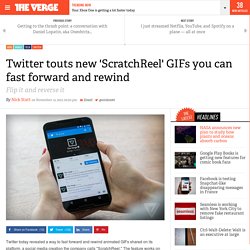 " The feature works on the web and on Twitter's mobile devices, and Twitter appears to have been surfacing these images in beta tests for weeks now. You can't check it out here within an embedded Twitter post — you have to click through — but when you move your mouse cursor or finger from left to right and back again on the moving image, you can control the animation. The feature is possible thanks to a startup called SnappyTV, which Twitter acquired in June 2014.

SnappyTV essentially lets organizations take live broadcasts and chop them up, remix them, and employ fun video tricks so the clips are more popular on social media. Twitter's example used a live broadcast of a surfer to show off ScratchReels, but you can imagine any number of big-name brands turning commercials into interactive advertisements. When Photographers Become Endorsements.

Photographers are used to being behind the camera, but the prominence and rise of photography – particularly through social media – has created emerging opportunities for photographers. 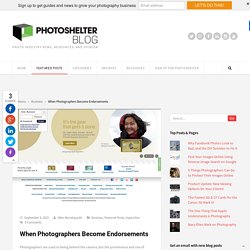 No longer relegated to pimping camera gear and workshops, the contemporary photographer has many more possibilities to endorse everything from cars to credit cars. How Colors Affect Conversions - Infographic. Color has a powerful psychological influence on the human brain. 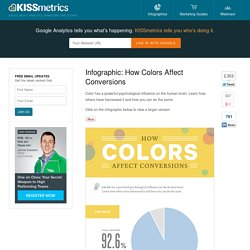 Learn how others have harnessed it and how you can do the same. Click on the infographic below to view a larger version: Brazil used Tinder bots to promote AIDS awareness. 4 Ways To Engage Your Audience With Visual Storytelling On Facebook. We are living in an age of News Feed overload. 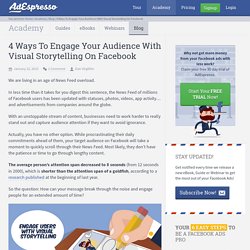 In less time than it takes for you digest this sentence, the News Feed of millions of Facebook users has been updated with statuses, photos, videos, app activity… and advertisements from companies around the globe. With an unstoppable stream of content, businesses need to work harder to really stand out and capture audience attention if they want to avoid ignorance.

The Facts and Figures about the Power of Visual Content - Infographic. We all know that images are compelling. 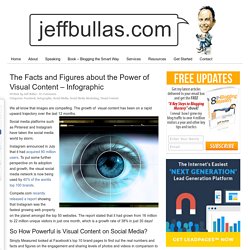 The growth of visual content has been on a rapid upward trajectory over the last 12 months. Social media platforms such as Pinterest and Instagram have taken the social media world by storm. Instagram announced in July that it had acquired 80 million users. To put some further perspective on its adoption and growth, the visual social media network is now being used by 40% of the worlds top 100 brands. Ten (and a bit) stats on why the visual web matters. The Power Of Visuals In Content Marketing (Infographic) How The Visual Web Could Achieve Its Potential. This post is presented by CIBC. 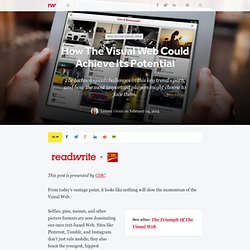 From today’s vantage point, it looks like nothing will slow the momentum of the Visual Web. See also: The Triumph Of The Visual Web Selfies, pins, memes, and other picture formats are now dominating our once text-based Web. Sites like Pinterest, Tumblr, and Instagram don’t just rule mobile; they also boast the youngest, hippest audiences coveted by marketers and startups alike.

It’s no wonder that in 2013, the Visual Web became a billion-dollar trend, sparking skyrocketing valuations for the leading players. Ready for Fast, Visual, Mobile E-Commerce? [Infographic] As the Web continues to “go mobile,” online retailers pursue the promise of m-commerce. 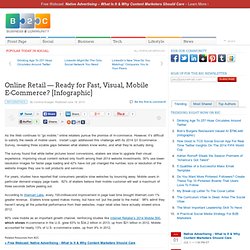 However, it’s difficult to satisfy the needs of mobile users. Instart Logic addressed this challenge with its 2014 Q1 Ecommerce Survey, revealing three sizable gaps between what etailers know works, and what they’re actually doing. The survey found that while better pictures boost conversions, etailers are slow to upgrade their visual experience. Improving visual content ranked only fourth among their 2014 website investments. 30% use lower-resolution images for faster page loading and 42% have not yet changed the number, size or resolution of the website images they use to sell products and services.

For years, studies have reported that consumers penalize slow websites by bouncing away. According to Walmart Labs, every 100-millisecond improvement in page load time brought Walmart.com 1% greater revenue. Author: Corinna Krueger Recommended Reading. How to Tap Into The Marketing Power of the Visual Social Web - Infographic. Everyone loves holidays. 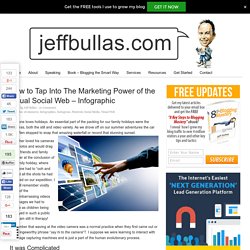 An essential part of the packing for our family holidays were the cameras, both the still and video variety. As we drove off on our summer adventures the car was often stopped to snap that amazing waterfall or record that stunning sunset. My father loved his cameras and photos and would drag all the friends and family together at the conclusion of the family holiday, where everyone had to “ooh and ahh” at all the shots he had captured on our expedition. 5 Ways to Create Highly Shareable Pinterest Pictures for Your Business. Are you looking for creative ideas to drive Pinterest traffic to your site? 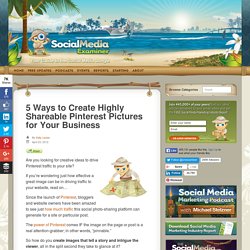 If you’re wondering just how effective a great image can be in driving traffic to your website, read on… Since the launch of Pinterest, bloggers and website owners have been amazed to see just how much traffic this social photo-sharing platform can generate for a site or particular post. The power of Pinterest comes IF the image on the page or post is a real attention-grabber; in other words, “pinnable.” So how do you create images that tell a story and intrigue the viewer, all in the split second they take to glance at it? How to Create a Successful Visual Social Media Marketing Campaign: Case Study. The band Smashing Pumpkins decided to engage their fans through a visual social media marketing campaign. 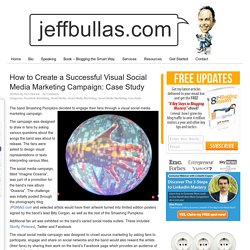 The campaign was designed to draw in fans by asking various questions about the songs the band was about to release. The fans were asked to design visual representations or texts interpreting various titles. The social media campaign, titled “Imagine Oceania”, was part of a promotion for the band’s new album “Oceania”. Pretty pictures: Can images stop data overload? 16 April 2012Last updated at 19:01 ET By Fiona Graham Technology of business reporter, BBC News Brain scan: Research suggests that one way to avoid being overloaded by data is by presenting it visually rather than text or numbers Sitting at your desk in the middle of the day, yet another email notification pops up in the corner of the screen, covering the figures you're trying to digest in the complicated spreadsheet in front of you.

Your laptop is open on the desk next to you with another set of figures you need - meanwhile you're frantically tabbing through different documents on the main screen. You have a meeting in 20 minutes and you suddenly feel as if you're swimming in a sea of impenetrable data, and you're starting to sink. Invest in Visual Content Creation. The other day I was commenting to a friend that I was on Facebook when it was still 'The Facebook.' If you're in my group, you may remember at that time it was just for college students, and you couldn’t do much more on it other than see what one friend was saying to another; there were no status updates, no news feed, and no sharing of videos or photos.

The point is, I’m only 25 and I already feel old in the history of social media. But as Bob Dylan famously said, the times they are a changin’, and social media seems to be doing it more frequently than other marketing channels. Marketers Need An Image Strategy. 10 Creative Ways to Market on Pinterest. Marketing used to be simple. You placed an advertisement in a magazine, the yellow pages or the local newspaper and people picked up the phone and called you or dropped into your place of business. Now you have dozens of marketing channels you can use and the media is not just print, television and telemarketing. The age of multimedia and multiple social networks is providing many choices and options. Now, having freedom of choice is good but sifting through the options today for the average business owner is a marketing minefield. Should it be email marketing, a Facebook campaign or a paid online campaign using Google Adwords.

Is investing in optimizing my website for search engines the right thing to do? The digital economy is a challenge for all business owners who want to be noticed and remembered by their prospects and customers. Pinterest is a fast emerging visually oriented social network that provides a platform that can bring out the creative marketer. Instagram Photographers in Demand by Major Brands. Instagrammers are the new brand influencers. In the wake of Facebook’s purchase of the popular photo platform for a cool $1 billion, a growing number of marketers have been trading perks—cash, trips, swag—to a coterie of widely followed smartphone photographers in exchange for snapshots broadcasting products or events.

Two weeks ago, for example, Barneys New York hired Anthony Danielle (@takinyerphoto, 166,000+ followers) along with other influential photographers to shoot the launch party for its new Costello Tagliapietra line. The same week Danielle was one of two high-profile Instagram users to snap and share photos promoting Warby Parker’s new summer eyewear, of which they received free samples. Meanwhile, Brian DiFeo (@bridif, 105,000+ followers), a partner of Danielle’s in The Mobile Media Lab—a marketing agency for Instagram, launched in March—was in Miami photographing the Volvo Ocean Race, with expenses covered by the auto brand. The Ultimate Guide to Using Images in Social Media « Jeffbullas's Blog Jeffbullas's Blog.