Is Your Brain Cross-Lateralized? FauxPas_Adult.pdf. Aspergers Adult AQ Test Quiz Online: Autism Spectrum Quotient. I prefer to do things with others rather than on my own. 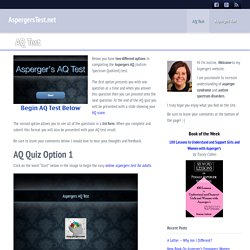 I prefer to do things the same way over and over again. If I try to imagine something, I find it very easy to create a picture in my mind. Empathizing-Systemizing Test. This is an combined version of Baron-Cohen's Empathizing Quotient (EQ) and Systemizing Quotient (SQ) tests. 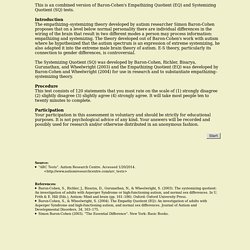 Introduction The empathizing–systemizing theory developed by autism researcher Simon Baron-Cohen proposes that on a level below normal personality there are individual differences in the wiring of the brain that result in two different modes a person may process information: empathizing and systemizing. The theory developed out of Baron-Cohen's work with autism where he hypothesized that the autism spectrum is an expression of extreme systemizing, he also adapted it into the extreme male brain theory of autism. E-S theory, particularly its connection to gender differences, is controversial.

Empathy Quotient (EQ) Psychology Tools. Triple Nine Society. The Triple Nine Society (TNS), founded in 1978, is a 501(c)(7) non-profit voluntary association of adults who have scored at or above the 99.9th percentile on specific IQ tests (or similar) under supervised conditions, which generally corresponds to an IQ of 149 or greater using a standard deviation of 16 (e.g. 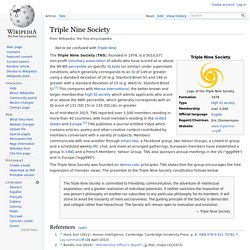 Stanford-Binet IV) and 146 or greater with a standard deviation of 15 (e.g. WAIS-IV, Stanford-Binet 5).[1] This compares with Mensa International, the better-known and larger membership high IQ society which admits applicants who score at or above the 98th percentile, which generally corresponds with an IQ score of 131 (SD 15) or 133 (SD 16), or greater. As of mid-March 2015, TNS reported over 1,500 members residing in more than 40 countries, with most members residing in the United States and Europe.[2] TNS publishes a journal entitled Vidya which contains articles, poetry and other creative content contributed by members conversant with a variety of subjects. 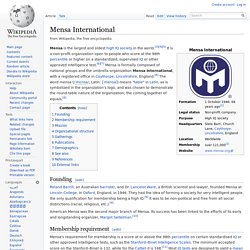 Lancelot Ware, a British scientist and lawyer, founded Mensa at Lincoln College, in Oxford, England, in 1946. They had the idea of forming a society for very intelligent people, the only qualification for membership being a high IQ.[6] It was to be non-political and free from all social distinctions (racial, religious, etc.).[9] American Mensa was the second major branch of Mensa. Its success has been linked to the efforts of its early and longstanding organizer, Margot Seitelman.[10] Membership requirement[edit] Mensa's requirement for membership is a score at or above the 98th percentile on certain standardised IQ or other approved intelligence tests, such as the Stanford–Binet Intelligence Scales. 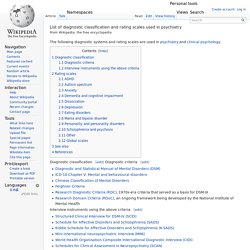 Contents. Internet Mental Health. We are pleased to offer free diagnosis of the 80+ most common psychiatric disorders. 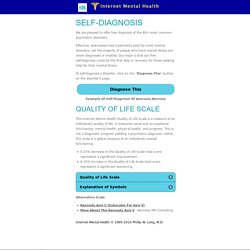 Effective, well-researched treatments exist for most mental disorders, yet the majority of people who have mental illness are never diagnosed or treated. Our hope is that our free self-diagnosis could be the first step in recovery for those seeking help for their mental illness. To self-diagnose a disorder, click on the "Diagnose This" button on the disorder's page. Rating scales for depression. Scales completed by researchers[edit] Some depression rating scales are completed by researchers. 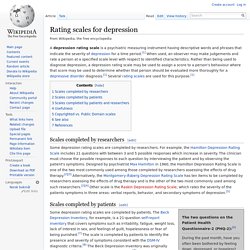 ARC Tests. Various tests have been devised by ARC for use in the course of our research. 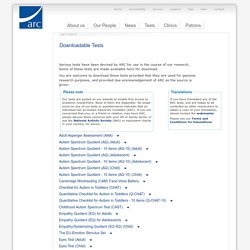 Some of these tests are made available here for download. You are welcome to download these tests provided that they are used for genuine research purposes, and provided due acknowledgement of ARC as the source is given. Adult Asperger Assessment (AAA) Adult Asperger Assessment (AAA) (Version 2, revised 2012. Note that translations below may apply to the previous version.)