PoemHunter.com: Poems - Quotes - Poetry. Skald. The term skald (or skáld) meaning ‘poet’, is generally used for poets who composed at the courts of Scandinavian and Icelandic leaders during the Viking Age and Middle Ages. 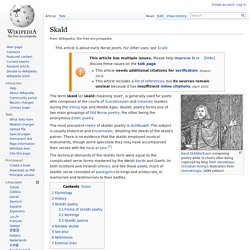 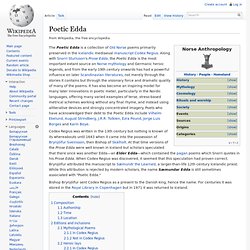 Along with Snorri Sturluson's Prose Edda, the Poetic Edda is the most important extant source on Norse mythology and Germanic heroic legends, and from the early 19th century onwards has had a powerful influence on later Scandinavian literatures, not merely through the stories it contains but through the visionary force and dramatic quality of many of the poems. It has also become an inspiring model for many later innovations in poetic meter, particularly in the Nordic languages, offering many varied examples of terse, stress-based metrical schemes working without any final rhyme, and instead using alliterative devices and strongly concentrated imagery. 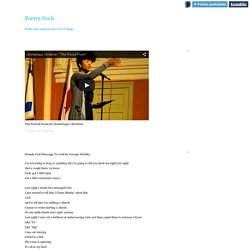 Dark Night of the Soul. Sufi Poetry. Mystical Poetry of Rumi! Jelaluddin Rumi, the 13th century mystic poet, was truly one of the most passionate and profound poets in history. 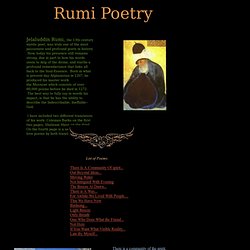 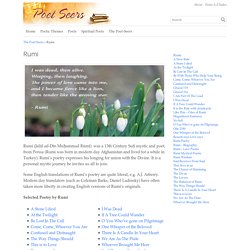 The Rubaiyat of Rumi. Rumi: Poems. Sufi Poetry. Rumi Short Poems. The minute I heard my first love story, I started looking for you, not knowing how blind that was. 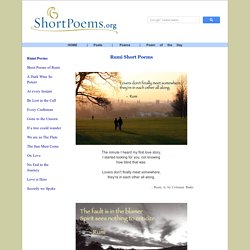 Rumi.pdf. Verses. Transcript: The Ecstatic Faith of Rumi. Krista Tippett, Host: The 13th-century mystic and poet Rumi is a best-selling author in the modern West. 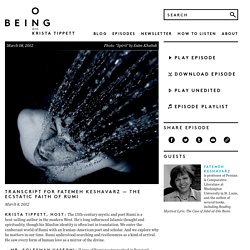 He's long influenced Islamic thought and spirituality, though his Muslim identity is often lost in translation. We enter the exuberant world of Rumi with an Iranian-American poet and scholar. Poems of Rumi, tr. by Coleman Barks - The Threshold Society. Mewlana Jalaluddin Rumi - Poetry & Biography of the Famous poet. All their poems! - All Poetry. Moulana Jalaloddin Rumi - Cal-Earth. Earth Architecture and Persian Mystic Poetry. 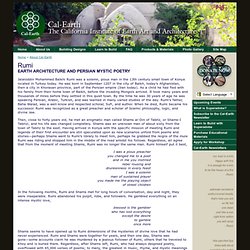 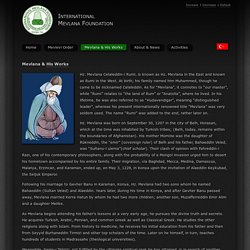 Mevlana Celaleddin-i Rumi, is known as Hz. Mevlana in the East and known as Rumi in the West. At birth, his family named him Muhammed, though he came to be nicknamed Celaleddin. On the Beach at Night by Walt Whitman. Benjamin Franklin, The Way to Wealth (1758) Frank Crane. Dr. 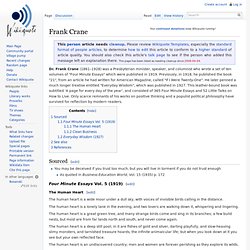 Frank Crane (1861–1928) was a Presbyterian minister, speaker, and columnist who wrote a set of ten volumes of "Four Minute Essays" which were published in 1919. Previously, in 1918, he published the book "21", from an article he had written for American Magazine, called "If I Were Twenty-One". He later penned a much longer treatise entitled "Everyday Wisdom", which was published in 1927. This leather-bound book was subtitled 'A page for every day of the year', and consisted of 365 Four Minute Essays and 52 Little Talks on How to Live. Only scarce remnants of his works on positive thinking and a populist political philosophy have survived for reflection by modern readers. Sourced[edit] You may be deceived if you trust too much, but you will live in torment if you do not trust enough As quoted in Business Education World, Vol. 15 (1935) p. 172 Four Minute Essays Vol. 5 (1919)[edit] The Human Heart[edit]

By Maria Popova A visual A-Z of the hidden treasures of language. As a lover of language and words, especially obscure and endangered words, I was instantly besotted with Project Twins’ visual interpretations of unusual words, originally exhibited at the MadArt Gallery Dublin during DesignWeek 2011. Acersecomic A person whose hair has never been cut. Biblioclasm The practice of destroying, often ceremoniously, books or other written material and media.

Examples of Funny Puns (and Punny Funs) On a good day, if you have the right friends and coworkers, you can expect to hear or read many examples of funny puns. Whether intentional or accidental, a pun is the use of a word or words that either have multiple meanings or sound like other words, the result of which is humorous. There are several different ways to make a pun. One-Word Puns There aren’t really any stand-alone, one-word puns as they all need some kind of context to create the word play. Bildungsroman. Thoughts on Intellectual Property. - davidmacgregor's posterous.