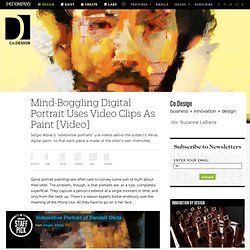 The problem, though, is that portraits are, as a rule, completely superficial. They capture a person’s exterior at a single moment in time, and only from the neck up. There’s a reason experts bicker endlessly over the meaning of the Mona Lisa. All they have to go on is her face. Spanish artist Sergio Albiac wants to dig deeper. Albiac started out by collecting personal videos from Okita: clips of friends and family, films he’s made, and so on. How a Photographer Created Images of Fireworks Unlike Any You've Ever Seen - Megan Garber. How to Take Better Pictures. How to Take Better Pictures © 1973 ~ 2017 Ken Rockwell and KenRockwell.com. 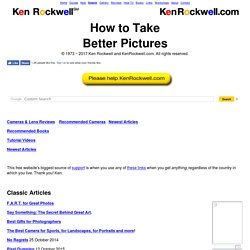 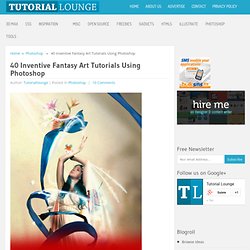 We tend to formulate a meaningful image that expresses cognizant and sub-conscious desires. Whatever the ingredients of the fantasy scene are, the results are always the same, beautiful, mysterious and thought provoking. Explore Art. New Artsy. ART. Artysyn Techne. Artysyn Photos. 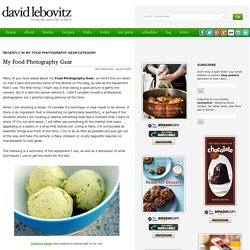 The first thing I might say is that taking a good picture is partly the camera, but it is also the person behind it. I don’t consider myself a professional photographer but I practice taking pictures all the time. When I am shooting a recipe, I’ll consider if a technique or step needs to be shown, if there is an ingredient that is interesting (or particularly beautiful), or perhaps if the situation where I am cooking or baking something feels like a moment that I want to share. How to Detect Physical Flaws in a Used Camera Lens. In Defense of the Poor Image. Hito Steyerl The poor image is a copy in motion. 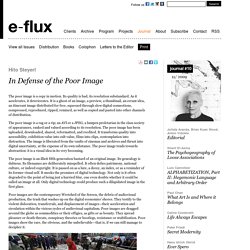 Its quality is bad, its resolution substandard. Groves’ Congealed Fir Varnish Creating an Optical Grisaille and Subsequent Coloring An "optical grisaille" is my own term for an old painting device which dates back at least to the Italian masters of the late 1400-1500's. 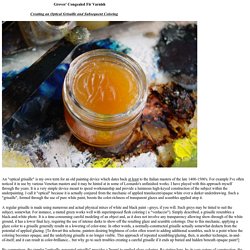 The world's largest photo service just made its pictures free to use. If you go to the Getty Images website, you'll see millions of images, all watermarked. 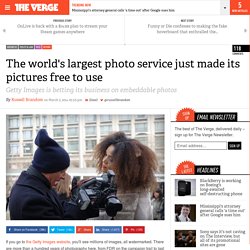 There are more than a hundred years of photography here, from FDR on the campaign trail to last Sunday's Oscars, all stamped with the same transparent square placard reminding you that you don't own the rights. If you want Getty to take off the watermark, you'll have to pay for it. "Our content was everywhere already. " ‘Slow Television’ and Stephen Poliakoff's Shooting the Past. Shooting the Past: a filmic meditation on the power of photos: Design Observer. Liam Cunningham as Christopher Anderson in Shooting the Past, directed by Stephen Poliakoff, BBC, 1999 There are plenty of movies featuring photographers as protagonists, but fictional film stories where the photographic image plays a central and pivotal role are not so common. 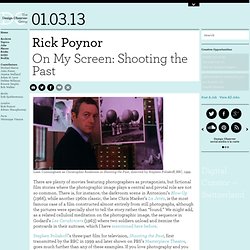 There is, for instance, the darkroom scene in Antonioni’s Blow-Up (1966), while another 1960s classic, the late Chris Marker’s La Jetée, is the most famous case of a film constructed almost entirely from still photographs, although the pictures were specially shot to tell the story rather than “found.” HAHistory.pdf. Shooting the Past - The Archive. Number of pictures that can be stored on a memory card. Photography 101.org - Photography Basics. Photography learning. How to Take Great Portraits Outdoors. Have you ever taken a picture outside, only to realize afterward that the sky is white instead of blue? 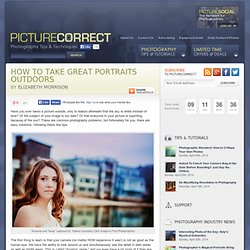 Or the subject of your image is too dark? Or that everyone in your picture is squinting because of the sun? These are common photography problems, but fortunately for you, there are easy solutions, following these few tips: “Amanda and Taras” captured by Tatiana Garanina (Click Image to Find Photographer) The first thing to learn is that your camera (no matter HOW expensive it was!) What Works in Black & White. Portrait Photography - 10 Tips to Capture Great Portraits - Portraiture tips and techniques. 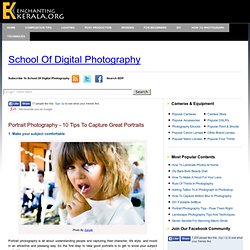 Make your subject comfortable Portrait photography is all about understanding people and capturing their character, life style, and mood in an attractive and pleasing way. Portrait. Digital Photography Tips. Defying gravity and weightlessness has always captured the imagination. These surreal compositions by Hungarian photographer Bence Bakonyi explore that theme. The idea of flying becomes a reality at least in the pictures of Bakonyi as his subjects are shown floating, appearing weightless. IMAGES. Photasme. Digi Pixels.