Theoretical and Computational Biophysics Group. Biological computer created at Stanford. Posted: 03/29/2013 07:42:14 AM PDT0 Comments A team of Stanford engineers has made a simple computer inside a living cell, where it could detect disease, warn of toxic threats and, where danger lurked, even self-destruct cells gone rogue.

10 minute Video presentation included at end of article is understandable description of bioengineering of the basic switches for this cellular computer, more than a year's worth of scientific endeavor :) Comic book version available via link requires membership to host site in order to download or view :! – mojojuju

The startling achievement, unveiled in Friday's issue of the journal Science, takes us to a new frontier -- where nature's instruction manual is being programmed to deliver information long-concealed within our bodies. 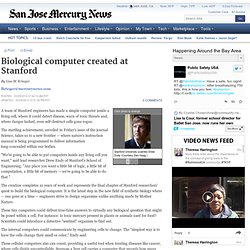 These tiny computers could deliver true-false answers to virtually any biological question that might be posed within a cell. Want to Build a New App? There's an App for That, Too. Competition in Apple’s App Store is so tough that even strong concepts must be planned to perfection before any development should start. 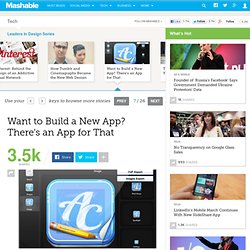 So enter App Cooker: A hot new iPad app that makes sure other apps have the right ingredients in place before any development begins. App Cooker ($19.99) from Sophia-Antipolis, France-based Hot Apps Factory helps aspiring designers organize, plan and get app projects ready for production. 30-year-old Xavier Veyrat — the designer of App Cooker — spoke to Mashable about the development of the platform and the steps that go into creating a masterpiece app recipe.

Have you always been into design? Always. What type of design inspires you? Companies such as Apple, Dyson and Braun are some of the main sources of my inspiration because they care about usefulness and beauty at the same time. How did the concept for App Cooker come about? Two years ago, I started to work on a gaming app with my partner Johann. 3 Ways APIs are Driving the Mobile App Revolution. It wasn’t long ago that application programming interfaces (APIs) were strictly the domain of IT departments and developers. 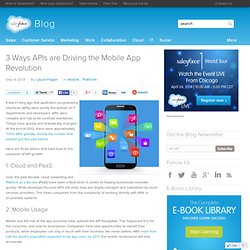 APIs were complex and had to be carefully maintained. Things have quickly and dramatically changed. At the end of 2012, there were approximately 7,000 APIs globally, double the number that existed just the year before. The Key Components of a Mobile App Strategy. There is no question that mobile apps are the future of commerce. 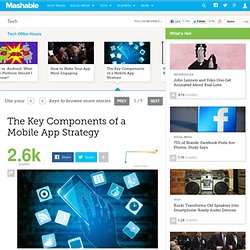 Not when the writing on the digital wall tells us that some 25% of online retail is bound for smartphones and tablets by 2017. That doesn't mean that your company is automatically clear on what to do, exactly. What is your mobile app strategy? And how can you front-load it for success? Password recovery scam: How hackers are stealing Gmail, Yahoo Mail accounts. Symantec has observed an increase in a "particular" type of spear-phishing attack targeting mobile users. 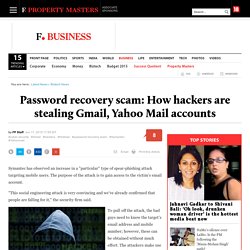 The purpose of the attack is to gain access to the victim’s email account. "This social engineering attack is very convincing and we’ve already confirmed that people are falling for it," the security firm said. To pull off the attack, the bad guys need to know the target’s email address and mobile number; however, these can be obtained without much effort. What's the Best Tape? Abusive Lab Test. February 26, 2009 12:00 AM How We Tested Sturdiness: Stacked dumbbells on a tape sling until it snapped. 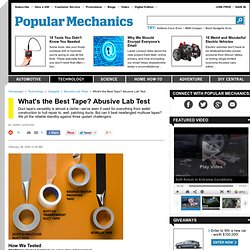 Stickiness: Stuck a bundle of four 12-gauge wires against drywall for a week. Water resistance: Submerged a bundle of tape-wrapped pipes for a week. Sturdiness Test Scotch Multi-use Duct Tape "For repairs in and around the house. " $10 for 60 yd + Sturdiness: We were able to stack 45 pounds of dumbbells on a length of tape before it broke. + Stickiness: Held a bundle of four 12-gauge Romex electrical wires against a wall for a full week. + Water Resistance: Water slightly loosened the tape's grip on PVC and copper pipe, but it stuck well where it was wrapped around itself. Scotch Transparent Duct Tape "Lasts six times longer than other heavy-duty tapes. " $6 for 20 yd + Sturdiness: Broke under 35 pounds of weight. + Stickiness: Our test bundle of wire fell from the drywall on the first night. + Water Resistance: Water did little to hurt an already lackluster grip.