Want to Build a New App? There's an App for That, Too 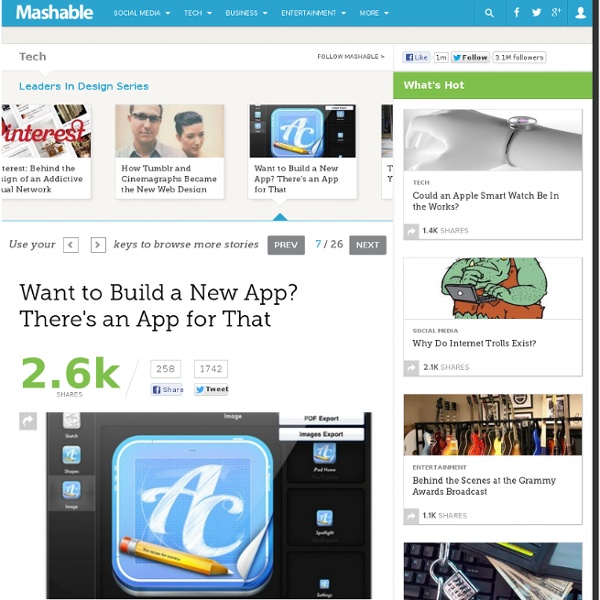 Competition in Apple’s App Store is so tough that even strong concepts must be planned to perfection before any development should start. So enter App Cooker: A hot new iPad app that makes sure other apps have the right ingredients in place before any development begins. App Cooker ($19.99) from Sophia-Antipolis, France-based Hot Apps Factory helps aspiring designers organize, plan and get app projects ready for production. 30-year-old Xavier Veyrat — the designer of App Cooker — spoke to Mashable about the development of the platform and the steps that go into creating a masterpiece app recipe. Have you always been into design? Always. What type of design inspires you? Companies such as Apple, Dyson and Braun are some of the main sources of my inspiration because they care about usefulness and beauty at the same time. How did the concept for App Cooker come about? Two years ago, I started to work on a gaming app with my partner Johann. What makes a good app?

Teaching Large Classes with an iPad » To this day I remain a big fan of the overhead projector. I truly believe it was more effective a tool for teaching than the projected Powerpoint slides will ever be. I stood facing the students, watching their expressions, which I could see since the lights were sufficiently bright. It’s been downhill ever since, …until this semester. This semester I’ve purchased an iPad2 and a software application called SplashTop Remote Desktop. To reach this new level of teaching nirvana I have found at least two routes (so far): The first requires that I simply bring my laptop (as I always did anyway) to class along with whatever cables/dongles needed to connect the laptop to the projection system, and my iPad.The second does not require the laptop but does require an AppleTV + whatever it takes to connect that to the projector. In both cases you could use the resulting system to present with KeyNote® but that would be so 90′s. Google+ Like this: Like Loading...

The Ultimate Guide To Using iPads In The Classroom How Students Benefit From Using Social Media 14.60K Views 0 Likes A lot of criticism has been leveled at social media and the effect it has on the way students process and retain information, as well as how distracting it can be. However, social media offers plenty of opportunities for learning and interactivity, and if you take a moment to think about it, it's not too hard to see how students benefit from using social media. 100 Web 2.0 Tools Every Teacher Should Know About 44.24K Views 0 Likes We're always trying to figure out the best tools for teachers, trends in the education technology industry, and generally doing our darnedest to bring you new and exciting ways to enhance the classroom. To Flip Or Not Flip?

TES Australia - Free F-12 Resources By Teachers, For Teachers The Must-Have App Review Rubric Added by Jeff Dunn on 2011-11-22 So you just downloaded a few educational apps that you think might be useful in your classroom. How do you accurately compare and contrast them? Thanks to a new app review rubric from by eMobilize , it’s easier than ever to understand just how useful an app may be in the classroom. On a related note, the Edudemic Directory features many educational apps and lets you quickly compare them to see how they stack up. I’ve rewritten the original rubric from eMobilize and tailored it to fit all school districts. Download The Rubric Here (PDF) Overview of the App App Title: App Publisher/Developer: Version: Link to App Store: Curriculum Compliance Yes/ No – Is it relevant to the curriculum framework? Operational Yes/ No – Is navigation easy? Pedagogy Yes/ No – Does the material accommodate diverse ways in which students learn? Comments are closed.

Twig Cool Drawing Apps for Primary School So many classroom activities are only fully realised when your students add their sketches to embellish their work, or to annotate a concept. Sometimes they just need to describe an object. Here are a series of apps that allow the creative little Picasso or Frida in your class to express themselves. Drawing Pad: $1.99 AU Drawing Pad offers an incredible amount of fun and creativity as a stand alone App but we've worked extra hard to allow parents the ability to extend the fun by offering in app coloring books). Doodlecast for Kids: $1.99 AU Doodlecast is a unique drawing app that records your voice as you draw. Kid Art for iPad: $0.99 AU Kid Art is now on the iPad! ArtRage: $7.49 AU ArtRage doesn't just drop color on your canvas, it keeps track of how much paint there and how wet it is, so you can blend colors under the brush as you paint, or lay down thick lines of pigment for flattening and smearing with the Palette Knife.

We should Bee Worried and then Bee... the change | Science Colony collapse disorder (CCD) is a phenomenon in which worker bees from a beehive or European honey bee colony abruptly disappear. While such disappearances have occurred throughout the history of apiculture, and were known by various names (disappearing disease, spring dwindle, May disease, autumn collapse, and fall dwindle disease), the syndrome was renamed colony collapse disorder in late 2006 in conjunction with a drastic rise in the number of disappearances of Western honeybee colonies in North America. European beekeepers observed similar phenomena in Belgium, France, the Netherlands, Greece, Italy, Portugal, and Spain, and initial reports have also come in from Switzerland and Germany, albeit to a lesser degree while the Northern Ireland Assembly received reports of a decline greater than 50%.Colony collapse is significant economically because many agricultural crops worldwide are pollinated by European honey bees.

Kathy Schrock's Guide to Everything - Bloomin' Apps This page gathers all of the Bloomin' Apps projects in one place.Each image has clickable hotspots and includes suggestions for iPad, Android, Google and online tools and applications to support each of the levels of Bloom's Revised Taxonomy.I have created a page to allow you to share your favorite online tool, iOS, or Android app with others. Cogs of the Cognitive Processes I began to think about the triangular shape of Bloom's Taxonomy and realized I thought of it a bit differently.Since the cognitive processes are meant to be used when necessary, and any learner goes in and out of the each level as they acquire new content and turn it into knowledge, I created a different type of image that showcased my thoughts about Bloom's more meaningfully.Here is my visual which showcases the interlocking nature of the cognitive processes or, simply, the "Cogs of the Cognitive Processes". IPAD APPS TO SUPPORT BLOOM'S REVISED TAXONOMYassembled by Kathy Schrock​ Bloom's and SAMR: My thoughts